To Celebrate SLAVE PLAY, Honor its Black Predecessors that Haven’t Been on Broadway 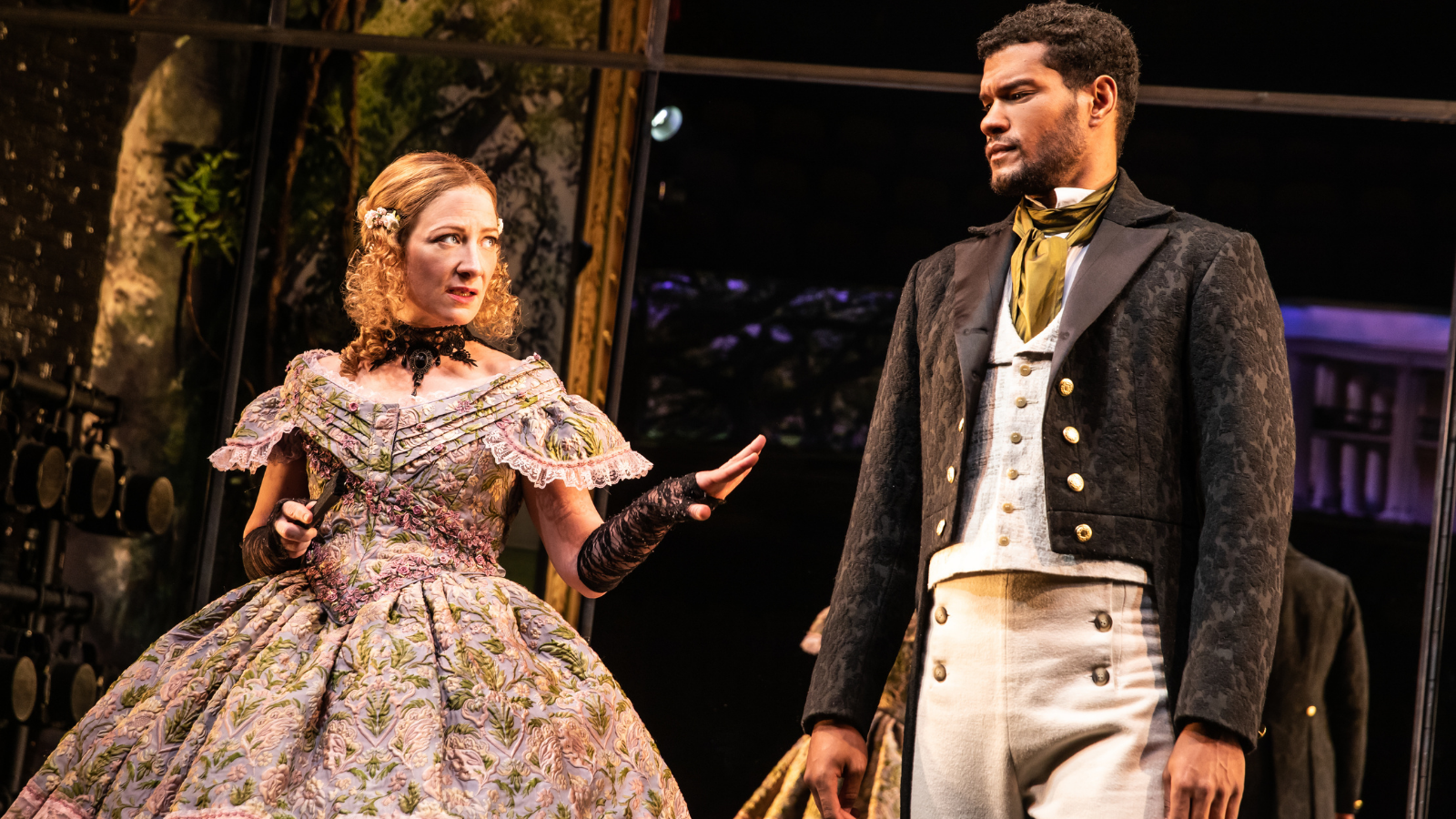 When Robert O’Hara’s play Insurrection: Holding History premiered at the Public Theatre in 1996, I’m not sure audiences were ready for it. The show, described in its author’s note as “a Bullet through Time,” is a Virginian epic of plantation violence, queer erotics, and camp fantasy. It follows Ron, a Black gay Ph.D. candiate at Columbia University who visits Southhampton, Virginia, to take care of his miraculously still-alive 189-year-old great-great grandfather T.J.. Ron is trying to write a thesis on the Nat Turner Slave Rebellion. So T.J. time-travels Ron to his youth as a slave, and wildness ensues. Spirits battle, blood rains from the sky, Black actors embody slave owners, queer men discover each others’ bodies, people and beds levitate.

Audience reception to Insurrection in 1996 was mixed at best. While critics were sure to acknowledge the sheer ambition of O’Hara’s writing, they derided the show as “disjointed,” “strained” or even “cartoonish.” In my opinion, these critics fatally misunderstood a masterpiece of dramatic literature—a play that smashed the sacred and the profane together into an unprecedented thrill-ride, unveiling the painfully  surreal world that is the Black South. Besides a few productions, Insurrection has remained sadly under-produced in America.

O’Hara was only 26 when he wrote and directed Insurrection. 23 years later, O’Hara would go on to direct another Virginian epic of plantation violence, queer erotics, and camp fantasy by a similarly young, Black, gay playwright. That show was Slave Play by Jeremy O. Harris.

What happened between 1996 and 2019 that changed audiences from dismissing Insurrection: Holding History to rewarding Slave Play? I think the answer is that over the more than two decades between both plays’ productions, a new generation of Black playwrights trained New York audiences to understand the wildness of both theatre and history.

No one might ever be “ready” to reckon with the realities of slavery. There’s never a “right time” or a “right way” to deal with this traumatic history. But between 1996 and 2019, Black playwrights proved that artists with a frank, uncompromising, imaginative vision can allow anyone to feel Black history on a visceral level. They’ve guided us to embrace pain and not let go.

To trace the lineage of Black playwrights that made Harris’s ascent to Broadway possible, we have to go back to the source, the mother of experimental Black theatre: Adrienne Kennedy. While many biographies have told the story of playwright Lorraine Hansberry as the trailblazing first Black woman on Broadway, only recently has more commercial and industry attention been given to Kennedy. She is a Black woman whose challenging, disturbing work was never written with the intent of a Broadway house in mind, but instead for audiences with a yearning for the heightened realities of Black life. Harris himself has even stated Kennedy as a primary influence in his work. “Adrienne takes the darkest parts of her history and looks at them not just through the prism of her dreams, but through the prism of her nightmares,” he stated in an introduction to Round House Theatre’s 2020 festival of her plays.

In her breakthrough 1964 play Funnyhouse of a Negro, Kennedy created a kaleidoscope of stark stage pictures. The show (loosely) revolves around the “Negro-Sarah” as she grapples with multiple versions of herself, the death of her father, and the ways in which her appearance has been racialized, gendered, and distorted. Kennedy eschews any narrative structure, offering up contradictory monologues that plunge audiences further into the chaos of Blackness.

Sarah, like Kennedy herself, is incredibly smart. Yet knowledge provides no reprieve for Sarah’s pain, only jumbled vocabulary for a despair that cuts deeper than language. Sarah wants to escape her life, and acknowledges that books are one way out. “Like all educated Negroes—out of life and death essential—I find it necessary to maintain a stark fortress against recognition of myself,” she states.

So much of Kennedy’s oeuvre takes place in academia, including liberal arts colleges, classrooms, bedrooms where books pile to the ceiling, and the stacks of a library. In her plays, a protagonist’s fierce intelligence doesn’t fix institutional oppression, but rather helps other characters over-analyze that same oppression.

The only release from this vicious cycle is a meta-theatrical one: the audiences of Kennedy’s plays can recognize that different knowledge comes from being in a theater rather than studying the latest academic terms. Kennedy’s characters might build fortresses against recognition of themselves, through their words. But by watching these Black characters onstage, audiences can see them for who they really are, in all of their messiness and truth.

Kennedy’s style of hyper-aware, academic-debunking, tumultuous playwriting slowly made its way into the mainstream as playwrights read Kennedy and followed her lead. In Insurrection, Ron tries to save slaves from murder through a book copy of “The Confessions of Nat Turner,” before surrendering to physicality as his medium of communication. In Suzan-Lori Parks’s Venus (1996), the show’s intermission contrasts a doctor’s racist medical jargon about his patient/love interest Saartjie Baartman with Baartman’s reading of love letters. Parks interweaves the horrors of scientific gynecology with the swelling passion of romance, until they become creepily interchangeable.

As revivals of Kennedy, O’Hara, and Parks increased in the 2010s, even more Black playwrights popularized this form of storytelling. In the second act of Lynn Nottage’s By the Way, Meet Vera Stark (2011), two academics debate the motivations behind the Black Hollywood actress Vera Stark, the protagonist of the first act. Nottage has made a post-show talkback not an extracurricular activity, but the very subject of her critique. In Jackie Sibblies Drury’s We Are Proud to Present… (2012), a group of Black and white actors devise a documentary theatre presentation on the Herero and Nama Genocide. Drury’s caustic satire exposes the liberal fantasies that theatre too often projects onto real-world horrors. Jeremy O. Harris’s playwriting mentor, Branden Jacobs-Jenkins, also creates shows that launch complex debates about authorship and audience. Jacobs-Jenkins’s An Octoroon (2014) follows a Black playwright attempting to adapt Dion Boucicault’s racist play The Octoroon, becoming infuriated by his own adherence to scholarship and criticism. “I can’t wipe my ass / without someone trying to accuse me / of deconstructing the race problem in America,” the surrogate playwright says.

In all of these shows, the playwrights and their characters know the limitations of reading books, going on historical tours, and visiting museums. These characters have done their homework, read (or more likely skimmed) the theory relevant to their circumstances, and twist academic language for their personal agendas. They act like their own dramaturgs. They know what narrative genres their lives fall under, and use these harmful archetypes to their advantage. After these characters’ manipulations, devastation for their Black peers—and themselves—follows.

This is not to say that the work of these Black playwrights is all doom-and-gloom. Because these playwrights are so self-aware, their camp winks at the audience are as delightful as they are alarming. We’re encouraged to laugh, to gasp, to sway to the rhythm in these shows. None of this subversive enjoyment discounts the terror at the heart of these histories. As author Hafizah Geter recently wrote, “Camp is a negotiation of horror, grief, and the absurd—it requires allowing yourself the space to look at what else gazing into the abyss calls up to you.”

This new generation of Black playwrights urges audiences to stare into the abyss with pleasure and pain. They ask us to reject any over-analysis we might seek after the house lights turn on. The traumas included in their works—holocausts, minstrelsy, sexual violence, chattel slavery—might never be healed through research or reparation. They might never be healed at all.

Instead of only listening to the words said by actors onstage, these playwrights ask us to hear the agony radiating off the stage. They encourage us to read between the lines, to ask questions their characters can’t, to push beyond what we’re witnessing onstage into what we’re witnessing in the audience, in ourselves.‍

‍Slave Play is arguably the culmination of all these playwrights’ efforts for audiences to keep up with their wild, infuriating, sprawling minds. In the twisty plot of Slave Play, I recognize the spiraling monologues of Kennedy, the communal incitement of O’Hara, the sincere romance of Parks, the anthropological insight of Nottage, and the structural strangeness of Drury and Jacobs-Jenkins.

Harris has in turn spotlighted the playwrights and thinkers that have shaped him. He’s created “The Golden Collection” (a collection of published Black plays whose sales support various arts organizations), along with a comprehensive dramaturgical guide available on the Slave Play website. It seems like Harris’s way of acknowledging that while he is the first to have a play so provocative make it to Broadway, he is not the first Black playwright to push the theatre industry in this direction.

The only show I know that’s working in this same tradition and is planning to go to Broadway is A Strange Loop, Michael R. Jackson’s meta-theatrical musical that won 2020’s Pulitzer Prize for Drama. Like Slave Play, A Strange Loop also challenges its audiences to understand the complexity of Black gayness, multiple theatre audiences, and the strain of history on family. If Slave Play’s Tony nominations have proven anything, it’s that people are hungry for stories that demand its audiences match, and surpass, the keen intelligence of its characters. A Strange Loop seems positioned to continue the rupture that Slave Play started. But it shouldn’t be the only Broadway show that challenges its audience.

Let Slave Play be the start of a movement of complex shows by Black playwrights premiering on Broadway. And while we’re at it, let’s finally get Kennedy, O’Hara, Drury, and Jacobs-Jenkins to the Great White Way, too. It’s time we have an abundance of ways to hold history.