TRAYF at The Geffen Playhouse Puts Friendship To The Test — Review 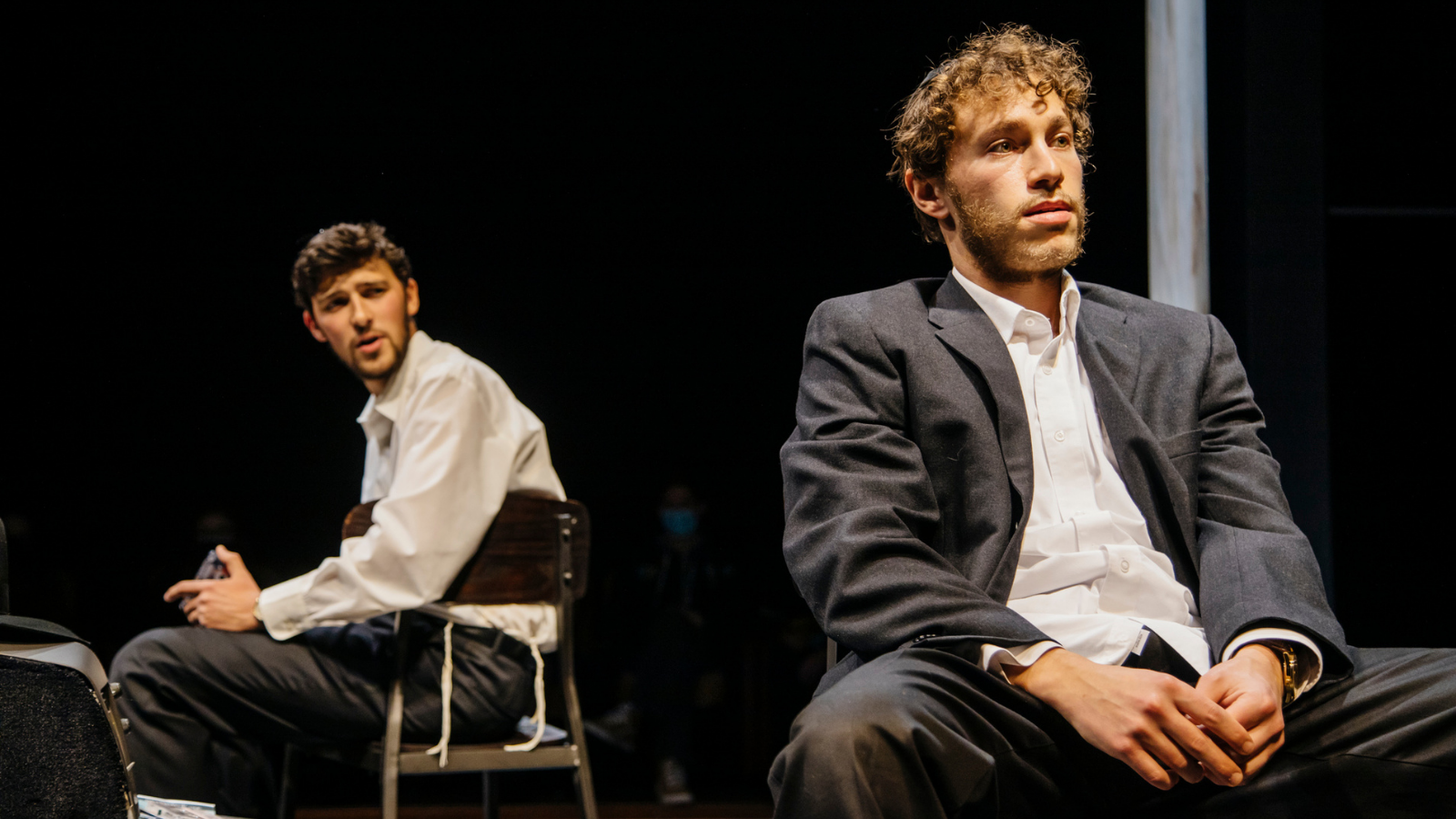 A dark stage, with only the charismatic voice of the Lubavitcher Rebbe emanating from a stereo, is slowly illuminated for the audience to see Shmuel (Ben Hirschhorn) and Zalmy (Ilan Eskenazi), two young men in their Mitzvah Tank, listening and jamming out to the Rabbi’s words like a rock concert. Their mission in the Tank is to drive through Manhattan and help Jews do Mitzvahs, good deeds, and in Lindsay Joelle’s Trayf, currently playing at the Geffen Playhouse’s Audrey Skirball Kenis Theater, they are put through tests of faith and friendship.

One day, a stranger named Jonathan (Garret Young) approaches them, inquisitive about the way they practice and preach Judaism. The audience learns that his father recently died, and Jonathan discovered he was Jewish. Zalmy and Shmuel are divided on how to proceed: the headstrong Zalmy is willing to take Jonathan under his wing even though, because his mother is not Jewish, he is considered a gentile by Jewish law, whereas Shmuel is at the same time concerned about bringing Jonathan into Judaism and losing Zalmy to a new best friend. They disagree not only about the role Judaism is newly playing in Jonathan’s life, but how it factors into their own lives.

Hirschhorn and Eskenazi are perfectly cast as the two young Chabadniks, with the requisite patchy facial hair and jewfros. Eskenazi, in his role as Zalmy, drove most of the plot, with decisive choices about his character’s hesitancy toward his background bringing that struggle to the fore. Hirschhorn, as Shmuel, is the earnest, emotional heart of the play; the empathy he brings to his role invariably invites the audience into his world, and onto his journey. Young plays Jonathan, an aspiring convert, with a shifty mien that leaves Zalmy and Shmuel often uneasy with him. The cast is rounded out by Louisa Jacobson, who makes her Los Angeles stage debut in a small but meaty role, playing Leah, Jonathan’s girlfriend. Her explosive encounter with Shmuel springs the play’s action into high gear.

Directed with a deft touch by Maggie Burrows, the show’s movement never stagnates, with the boundless energy and vivacity of its two main characters driving the action throughout. The seemingly utilitarian set, done by Tim Mackabee, proves that there is always room for surprises. Denitsa Bliznakova’s costumes firmly set the play in the early ’90s, and her timeless baggy black Chabad suits are perfect. The lighting and sound, by Lap Chi Chu and Everett Elton Bradman serve to highlight the text, especially as music plays a large role in the characters’ journeys.

Trayf, however, is not a look into Chabad culture; it merely uses it as a backdrop to explore the lives of its two main characters. Their struggles between community and individuality are universal, and this play highlights that rift. Led by a superb cast, Trayf is not one to be missed.

Trayf is now in performance at the Geffen Playhouse’s Audrey Skirball Kenis Theater through April 10 in Los Angeles, California. For tickets and more information, visit here.