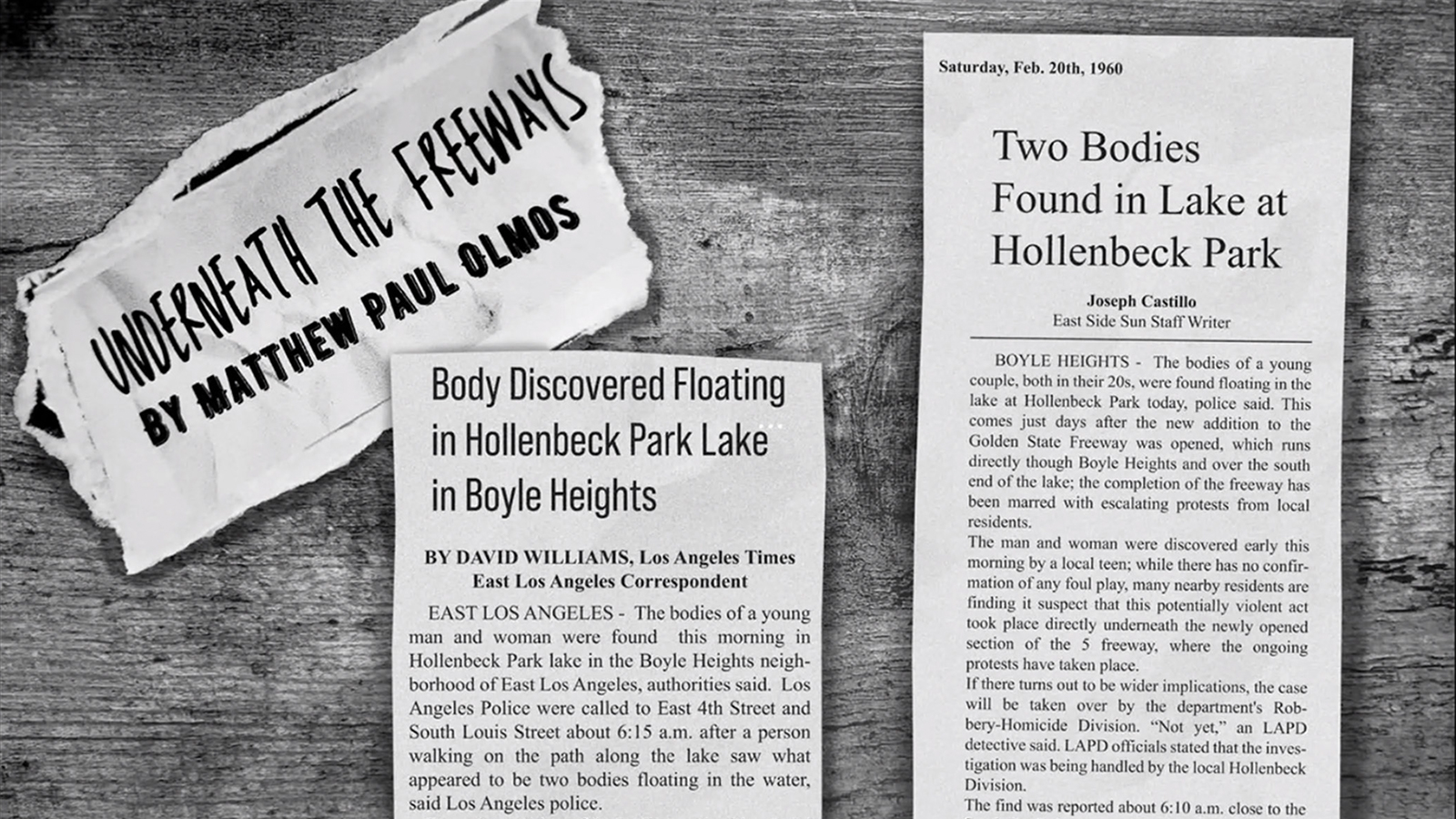 By
Zack Reiser
No items found.
on
Category:
Reviews

We’re in East L.A. in 1960. The bodies of a young man and woman have been discovered in Hollenbeck Park, right below the newly-built section of the 5 Freeway that stands over the south side of the lake. Our narrator introduces us to five suspects of interest: the freeway project manager, a protest leader, a local teen artist, a neighborhood mom, and a vagrant with a record. We are given a few minutes with each person to ask whatever we feel necessary. Who can you rule out? Which one is guilty? And what does it mean for the community of Boyle Heights? Those are the questions Echo Theatre Company forces us to answer in Under the Freeways of Los Angeles.

The murders may be fictional, but the protests surrounding the construction of the 5 Freeway in Boyle Heights were certainly real. The day before the show, Echo Theatre Company provides the audience with a couple of newspaper clippings of the fake incident, and some real world articles to give historical context, but unfortunately that is all the world building that gets done before you enter the show. It was hard not to feel somewhat un-immersed in the experience–an issue that pervaded the evening. The note in our pre-show emails encouraging (but not requiring) costumes or taking on a “character” very different from ourselves was ignored by everyone in the performance I participated in.

We are met at the beginning of the evening with our narrator (Amy K. Harmon). She tells us of her passion for the case, and asks us to question the five people the LAPD currently have in custody. We then proceeded into smaller breakout rooms to conduct nine-minute-long interviews with each character, who take their improvised performances with aplomb. Gloria Ines and Rolan Ruiz give standout performances as DeeDee Echeverria and Efren, respectively.

Where Under the Freeways let me down is in its level of immersion. Aside from being done completely in black and white, I felt that I could have just as easily sat in front of any one of the six characters at any other time. The bare background/set design also does little to suggest a time and place. The show asks us to think about our sense of community, but the structure of the show doesn’t do anything to build a community with our audience. I found by the time my group got to our fourth and fifth interviews there were long, awkward moments of silence where there should have been engagement. The story, created by Matthew Paul Olmos, has so much interesting merit, but doesn’t take enough care to think about how the audience needs to interact with each other (or the performers) and process new information together to reach conclusions to make the experience feel meaningful.

It was hard not to think about Citizen Detective, the true crime mystery from Geffen Playhouse, that I enjoyed over the winter. Whereas Citizen Detective left no interaction unthought of–from the clues dropped in our emails the evening of our show, to the time we were allowed with our narrator throughout the evening to discuss our findings, to the total utilization of Zoom to come up with decisions as a whole audience–Under the Freeways dumps all the information in our laps and doesn’t give us the chance to put the clues together. Under the Freeways sounds like an alluring experience on paper, but on screen doesn’t put the pieces of the puzzle together well enough.

“Under The Freeways” runs through April 26, 2021. For tickets and more information, visit here.