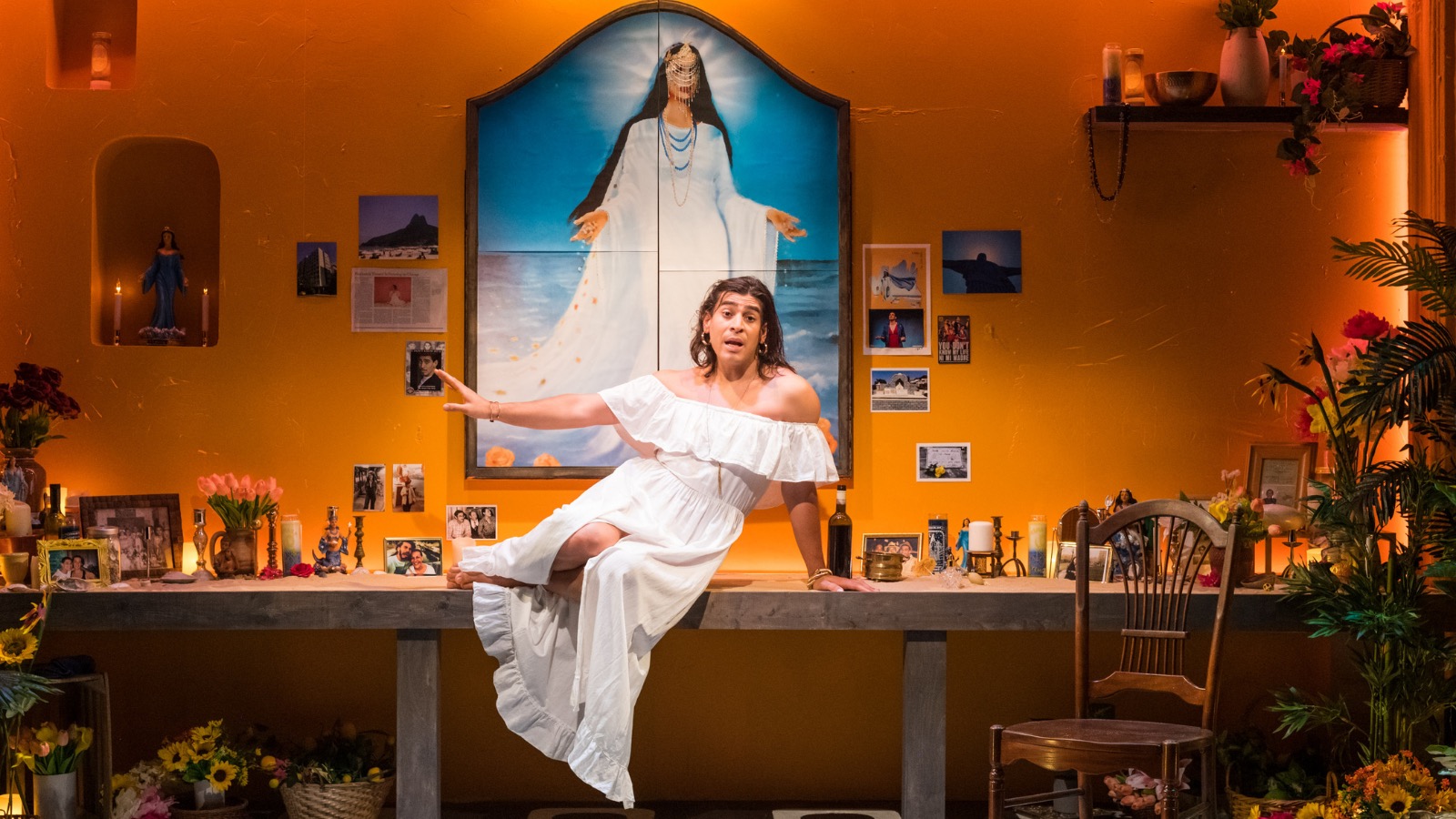 A queer son plays his own mother in writer-performer Arturo Luís Soria’s Ni Mi Madre: a one-man, one-hour tropical breeze that picks up into a storm of child-rearing trauma. Unlike that most famous mommy imitator Norman Bates, Soria does not aim to kill, but takes an unsparing stab at the perilous business of meeting your maker.

In performance at the Rattlestick Playwrights Theater––which is also live-streaming each show––he enters dressed in a flowy white dress that’s half baptismal gown, half mom-on-vacation. Recounting his maternal lineage’s troubled history of identity, love, and immigration with warmth and an axe to grind, Soria-as-mother makes plenty of references to himself-as-son, but smartly avoids making this a public therapy session.

Rather, the play is a blend of imagined confessional and stand-up act, recounting his mother’s relationships to her many husbands and showcasing Soria’s considerable talent at working a room. His perfect timing is matched by a performance that seductively straddles the line between characterization and affectation––you never lose sight of the fact that it is Soria onstage, but that’s the point. Unlike most performances that feature a multilingual character employing some bastardized Spanglish (the Dora the Explorer effect), Soria’s speech is realistic, transitioning between English, Spanish, and Portuguese just as fluidly as his mother’s saunters from memory to memory, from bottle to bottle.

Danilo Gambini’s direction uses the small space well, and Kathy Ruvuna’s sound design pumps Gloria and Madonna while Soria scurries about searching for the next drink. Stephanie Osin Cohen’s simple, yet carefully appointed set is a bright room with the plants, candles, vanity items, and large portrait of a Virgin walking on water that looks suspiciously like Cher that only a queer Caribbean could envision.

That Virgin looms large over the stage, giving the proceedings a spiritual air intoxicated with the suggestion that self-martyrdom is just another performance (true of both Soria and his mother). The boozing and pill-popping that mounts to a narcotized finale smooths out some of the play’s more forced moments of agony, but it rests well enough on the delivery of Soria’s convivial banter, and the deliverance from the sins of the mother.