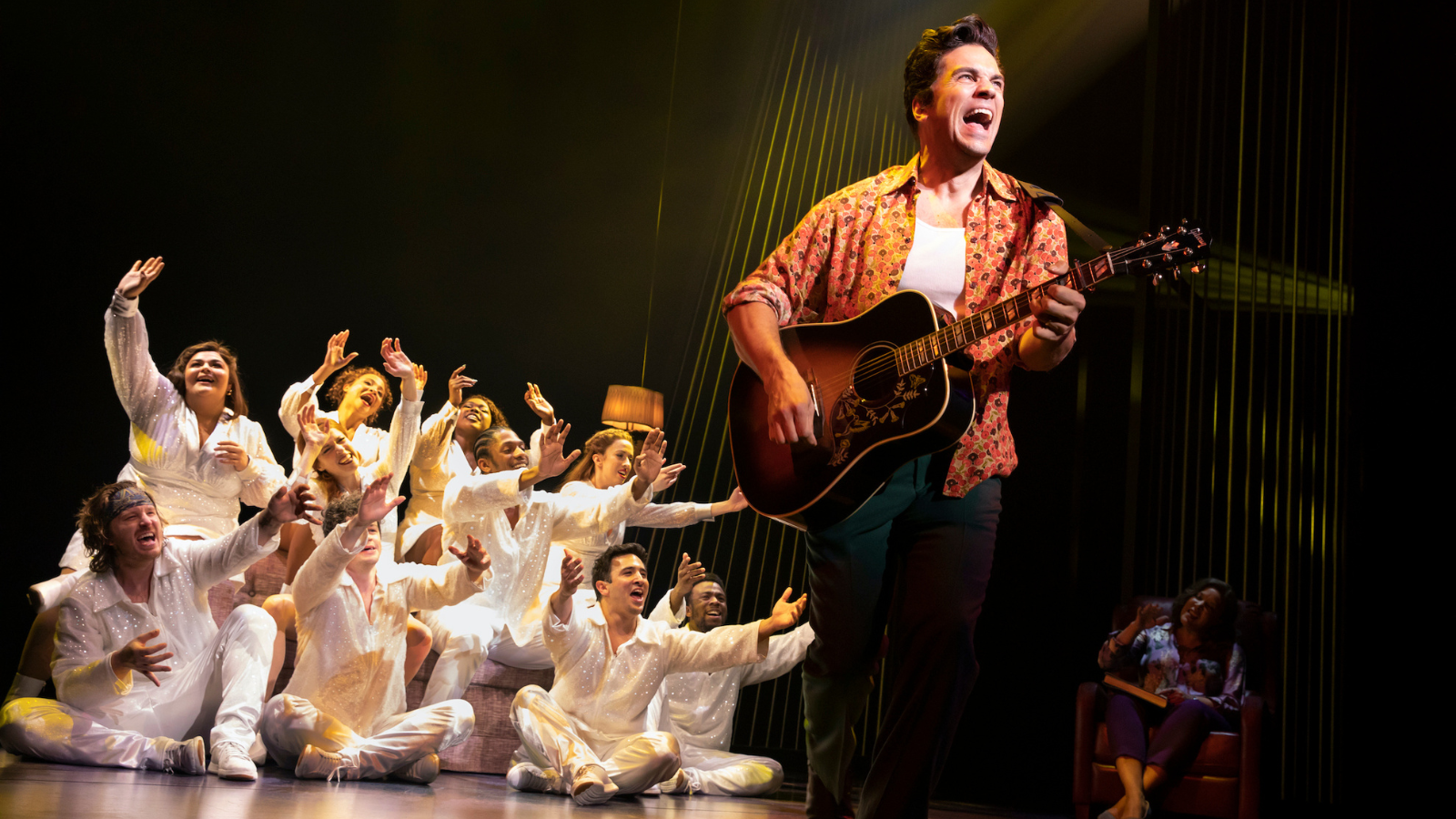 Will Swenson and the company of A Beautiful Noise | Photo: Julieta Cervantes

There’s a moment in the Neil Diamond bio-musical when the famed singer-songwriter says his career was “a beautiful monster.” That’s an apt description for A Beautiful Noise, the new musical on Broadway after a superb out-of-town tryout in Boston. It’s poised to be a box-office smash that doesn’t necessarily drive any artistic conversation forward but leaves audiences gobsmacked with joy. On Broadway, where the dollar will always reign supreme, especially as the industry still reels from an unprecedented shutdown, what matters more than having a good time? A Beautiful Noise offers as good a reason as any for crowd-pleasers like these.

The musical opens with Neil in the present day, played with emotional heft by Mark Jacoby, as he sits in a therapist’s office refusing (at first) to divulge his inner turmoil. Said therapist is simply named “Doctor,” a harbinger that Linda Powell will have little to do but sit in an armchair and enjoy the show unfolding around her. Together, they leaf through Diamond’s voluminous book of lyrics to spark memories that plot the trajectory of one of the most successful music careers of all time. It’s a clunky-but-inventive story device that ultimately leaves the present day characters on the stage too much—they’re either mimicking the past with no purpose or neatly swept to the side to watch whatever action is unfolding.

Will Swenson plays Neil Diamond–Then with verve, stoic and hunky with a gravel-y voice matching Diamond’s to a tee. At the performance I saw, however, it took a short while for the star to settle into the role. I attribute that more to director Michael Mayer leaning into Anthony McCarten’s book, which kicks off flashbacks with the star lacking confidence as he tries to find a record deal. Having Neil Diamond-Then come on stage, before the memories unfold, to lead a title track opening number in pop star concert mode but with a semblance of hesitancy is a choice that doesn’t quite work.

As Neil’s star begins to rise, the story incorporates songs like “Kentucky Woman,” “Song Sung Blue,” and “Cherry, Cherry.” Those numbers offer glimpses of the show’s full potential but most of Act 1 feels a bit like watching a movie—a metaphorical pane of glass separating the stage and the audience. Of course, whatever barrier there is gets completely shattered by “Sweet Caroline” as the participatory lead-in to intermission. Never has a rising platform looked so good (so good!). From there, it’s a high-octane roller coaster ride—energized by a mighty and delightful ensemble called “The Noise”—to the final curtain in Act 2. Once it grabs hold of the audience, it doesn’t let go.

The show’s narrative arc features all of Neil’s various ups (world tours, #1 singles and records, a house in Malibu) and downs (multiple divorces, an ironclad record deal with the mob). As Diamond gets ready to wrap up his therapy sessions, it loops way back to his childhood and his parents, which neatly allows one of his best songs, “America” to spotlight the plight of immigrants. It’s a motif that hits the right emotional notes, even if it’s slightly out of place chronologically.

Despite this being Neil’s story, it is the women who shine brightest, particularly Robyn Hurder as Marsha Murphey (Diamond’s second wife) and Bri Sudia as record exec Ellie Greenwich. Hurder, who at this point should be at “national treasure” status and is easily the best dancer on Broadway right now, owns the stage whenever under the spotlight. Her belting at the end of “Forever in Blue Jeans” is sublime. Sudia, making her Broadway debut, is hilarious and quippy thanks to McCarten’s best-structured part of the story: Neil’s transition from struggling artist to bona-fide superstar.

The production itself is also elevated by a number of design elements, particularly Emilio Sosa’s triumphant costumes, sequined and flamboyant in their ‘60s and ‘70s pastiche. David Rockwell’s scenic design smartly incorporates the orchestra, which makes a fashionably late appearance on stage. And props to sound designer Jessica Paz for delivering a pop-rock bio-musical that didn’t blow out my ear drums.

Still, at the end of the day, it’s hard to not think of this “beautiful monster” motif mentioned above. Everything that works does it so well but the aspects that don’t are the typical traps of a bio- or jukebox musical, cheapening the overall experience. For example, several props are only half-used on stage. Inconsistencies with microphones and telephones cheapened a few of the high-stake emotional scenes. In a way, it’s very unlike Neil Diamond’s own journey, who clearly thought out every note, every lyric for all of his songs.

A Beautiful Noise wants to explore how artistic passion can lead to an isolated and calculated life. Constantly forced to choose between himself and others, narcissistic pride won out—and look where it got him. After all, he feels like “The King,” as he says in a later therapy session—and Broadway is his next kingdom.

A Beautiful Noise is now in performance at the Broadhurst Theatre on West 44th Street in New York City. For tickets and more information, visit here.