A CASE FOR THE EXISTENCE OF GOD Is Sublime Theatre — Review 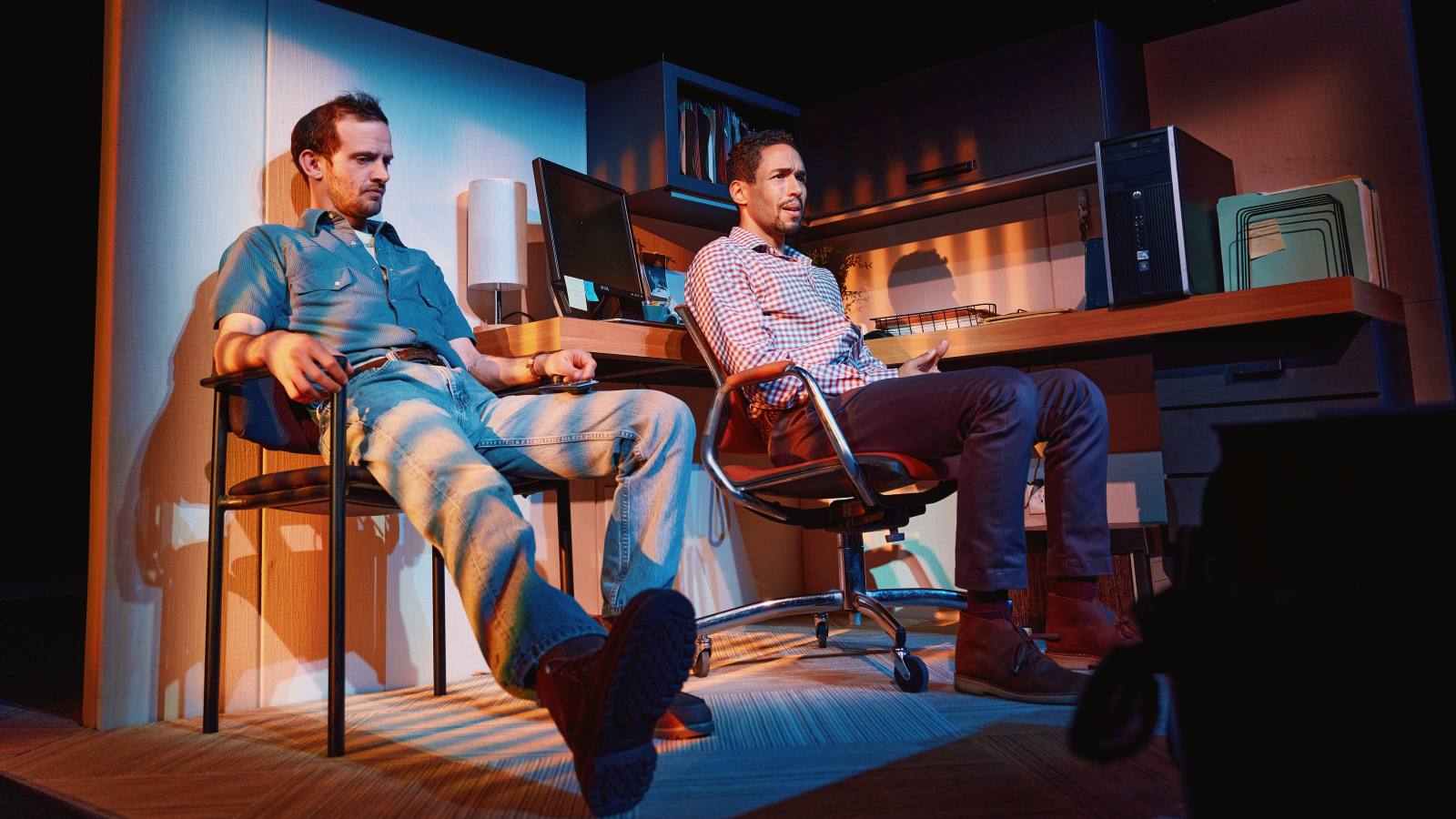 A mortgage broker, we learn early on in A Case for the Existence of God, is not the same as a mortgage lender: he is a middleman, unable to grant anyone’s wish and living in a no man’s land of pending choices and decisions. Sublimely directed by David Cromer with the dignity and consequence of an instant classic, Samuel D. Hunter’s phenomenal new play brings the terror of such trapped existences to dizzying light with its two-man cast. Never has immobility and cautiousness seemed so frighteningly visceral.

The broker, Keith (Kyle Beltran), is polite, gay, Black, and intelligent. The well-traveled son of a moneyed lawyer, he wastes his degree in Early Music on his job at a brokerage firm in Twin Falls, Idaho while hoping the baby he recently adopted isn’t taken away by a suddenly-interested member of its biological family.

Keith is not the type to share this openly, but does so over a series of increasingly personal conversations with potential client Ryan (Will Brill), another single father he met at daycare. An outgoing white factory worker whose high school glory days obscured a troubled home life, Ryan’s willingness to overshare reflects his place at the top of the majority-white town’s food chain.

But Hunter’s play isn’t as simple as basic identity politics, deconstructing its characters’ identities and impulses carefully as they cautiously find their bond strengthening as the dullness of their business partnership gives way to a profound closeness.

Both men are lonely in their own way, and Tyler Micoleau’s deft lighting and Christopher Darbassie’s sound design signify the slow progress of their relationship. Suddenly it’s dark, and they’re drinking. Are they at his place? His place? A bar? The play is almost careless about setting, placing its entire weight behind its rich dialogue and trusting its actors—and, refreshingly enough, its audience—to carry its hefty, unassuming burden. A brilliant bit of stagework, I’ll say, features a generic computer background signifying the duo’s transition to a public park.

If Hunter’s musings sometimes flirt with the overly romantic, he is smart to channel them through Ryan, whose open-mouthed awe at the intellectual world to which Keith exposes him makes an appropriate passageway for the play’s more grandiose preoccupations. Brill brings the same free-weheeling American boldness he deployed to hilarious effect as Ali Hakim in the last Oklahoma! revival to this role; an easy worldliness reconstructed out of the constricting confines of an all-American exceptionalism.

Keith, meanwhile, is guarded, carrying a lifelong sense of alienation from growing up a gay man of color in a rural town. Beltran plays him with clipped speech and an unnerving tension that marvelously hints at his character’s anguish—one he might find unique and unshareable, but is understood all too well. Brill and Beltran are first-rate scene partners, allowing their characters to catch themselves and each other as the two uneasily forge a powerful bond. The two play so well together, in fact, that it took me well past the play’s hour-mark to realize neither had once stood up from their chairs throughout.

There isn’t much motion in this production, elegantly staged in Arnulfo Maldonado’s purgatorial scenic design: a lone cubicle against a vast, unquestioning nothingness that extends from the floor up to whatever might be above us. Cromer recreates his masterful understanding of the charged momentousness of muted liminality that he showed in his Tony-winning work on The Band’s Visit, working the play’s stillness with impeccable vitality.

Cromer and Maldonado’s work approximates the immensity of existence Hunter evokes—the play’s psychic timeline stretches from the lost 900 AD songs Keith adores to the year 2100 Ryan understands their children might live to see. But despite the hugeness of humanity, and the smallness of our existence, this transcendent new play and its stunning final tableau make a case for the present as being just the right size for us.

‍A Case for the Existence of God is in performance through May 22, 2022 at The Pershing Square Signature Center on West 42nd Street in New York City. For tickets and more information, visit here.