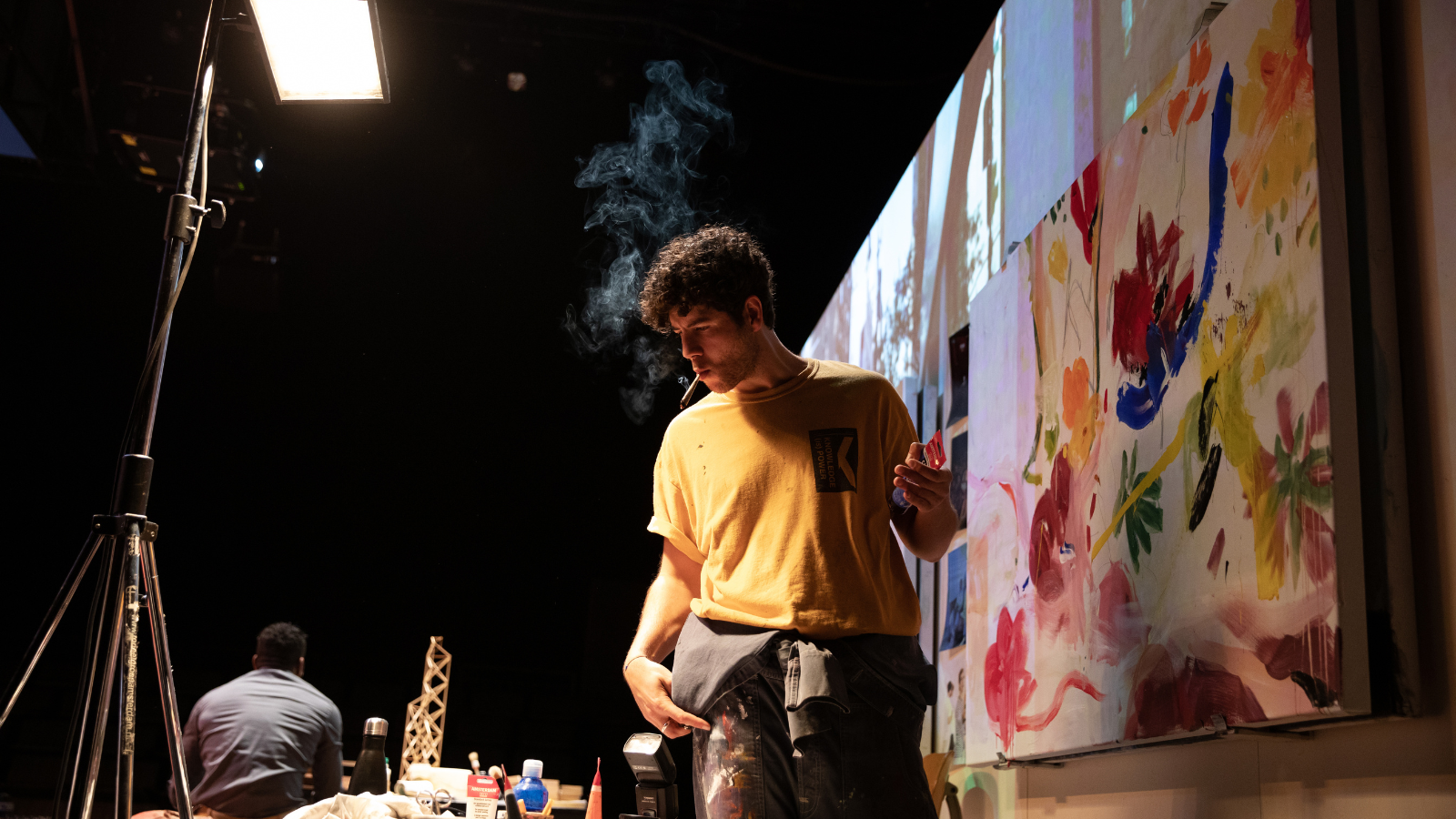 When Hanya Yanagihara’s A Little Life came out in 2015, I found it inescapable. The cover, a black and white photograph of a man in pain (or ecstasy?), followed me around on the subway, the beach, and the airport. When a friend finally gifted me the book, it became another eagerly started but quickly abandoned literary project on the shelf.

So, I went into Ivo Van Hove’s A Little Life, adapted by Koen Tachelet and part of BAM’s Next Wave Festival, with little context. I did know that it was going to be intense. The one comment I continuously heard from friends was that they had to put the book down at times due to its intensity. I also knew it dealt with gay themes. A 4-hour, intense, gay van Hove production at BAM? Say less.

Now, after absorbing the mesmeric violence of van Hove’s uneven production, all I can wonder is what type of friend would give me this book? How did this book become this popular? How much pain can an audience member take? About a quarter of the audience left at the show I saw.

For those also new to A Little Life, the story depicts the late-twenties to mid-fifties of the enigmatic Jude St. Francis (Ramsy Nasr). Secondary to Jude are his friends JB (Majd Mardo),  Malcolm (Edwin Jonker), and Willem (Maarten Heijmans). Early on, Willem, Jude’s closest friend and eventual lover, says there is an unspoken rule of not pushing Jude to speak about his past. Through flashbacks, often guided by the ghost of Jude’s former social worker (Marieke Heebink), we learn Jude has been subjected to a horrific amount of sexual and physical abuse beginning at a monestary where he was abandoned as a newborn. To deal with this pain, Jude cuts himself. As we learn more about Jude’s past and he continues to be abused in the present, the hefty escape of suicide lingers.

Entirely in Dutch (with English supertities), the text is dense. Yanigahara’s novel is about 800 pages. The sparse, wide set (designed by Jan Versweyveld, van Hove’s life partner and frequent collaborator), featuring plenty of the artist’s signature background, naturalistic busy work, is primed for transformation. However, van Hove’s production is surprisingly stagnant and uneven.

The consistent monotone delivery of text is sometimes cut with sudden screaming. The fairly still staging is sometimes cut with loud music and strobe lights. It all makes little theatrical sense. The flashback-heavy story relies on the audience both investing in Jude as a character and putting pieces of the past together. Instead, the sharp juxtaposition breaks apart the theatrical connective tissue that could, for example, track Jude’s mental state as a child to middle age.

Then there is the violence. Yanagihara has been criticized in the past for writing trauma porn, all of which van Hove stages. When Jude cuts himself the first time, it is shocking. However, by the third time I watched Ramsy’s Jude crawl bloody and nude across the stage, I began to feel…nothing. The violence of the piece eventually washed over me. Every time something horrible happened to Jude onstage, of course it did. There are no dramatic stakes when everything is traumatic; what once was relentless is now expected. As a piece of narrative, adapted theatre, it does not work.

However, as endurance performance art, it does. Ramsy throws his entire, often nude, body into the role. There is an unending cycle of abuse and self-harm including simulated cutting, rape, and physical attacks. Credit must be given to van Hove staging the abuse in a theatrical, choreographed way. I also credit van Hove for cleverly staging a ritual cleansing the blood each time Jude cuts himself. Almost all of this is done by Jude’s former teacher and father figure Harold (Jacob Derwig) and supportive doctor (Bart Slegers). However, while the stage is ceremonially cleansed, whatever blood Jude spills on himself remains. Even in the brief (very brief) moments of joy onstage, Jude is covered in blood.

The piece finally hits its rhythm in Act 2 during a sequence where fifteen-year old Jude escapes one abuser, Brother Luke, only to be kidnapped by another, Doctor Traylor. Ramsy, fully nude, sprints across the stage as Hans Kesting, who excellently plays three main abusers in Jude’s life, circles him with a spotlight. I sat on the edge of my seat wondering how long the brutal sequence would last. I found the true stakes of A Little Life lie in how far Ramsy was willing to push his body on stage.

Even though I wouldn’t say I enjoyed my time at A Little Life (I mean, what is there to enjoy…), it deeply affected me. Looking up at the supertitles and back down to the drama onstage, I found myself lured into a trance. It reminded me of the first time I watched Stanley Kubrick’s Eyes Wide Shut. The images were disturbing, but I found myself hypnotized to stick them out. Leaving the show, my companion for the evening encouraged me to read the book. And maybe I will.

A Little Life is currently playing through October 29 at BAM. For more information and tickets, click here.

Nolan Boggess is a director and writer living in Brooklyn. Originally from Iowa, Nolan’s theatre obsession began with the VHS of Cats and one too many productions of The Music Man. A graduate of Grinnell College, Nolan currently works as a COVID Safety Manager on Broadway. He is so thrilled to be apart of the Theatrely team - say hi to him on social media!