A New Dawn with PASS OVER — Review 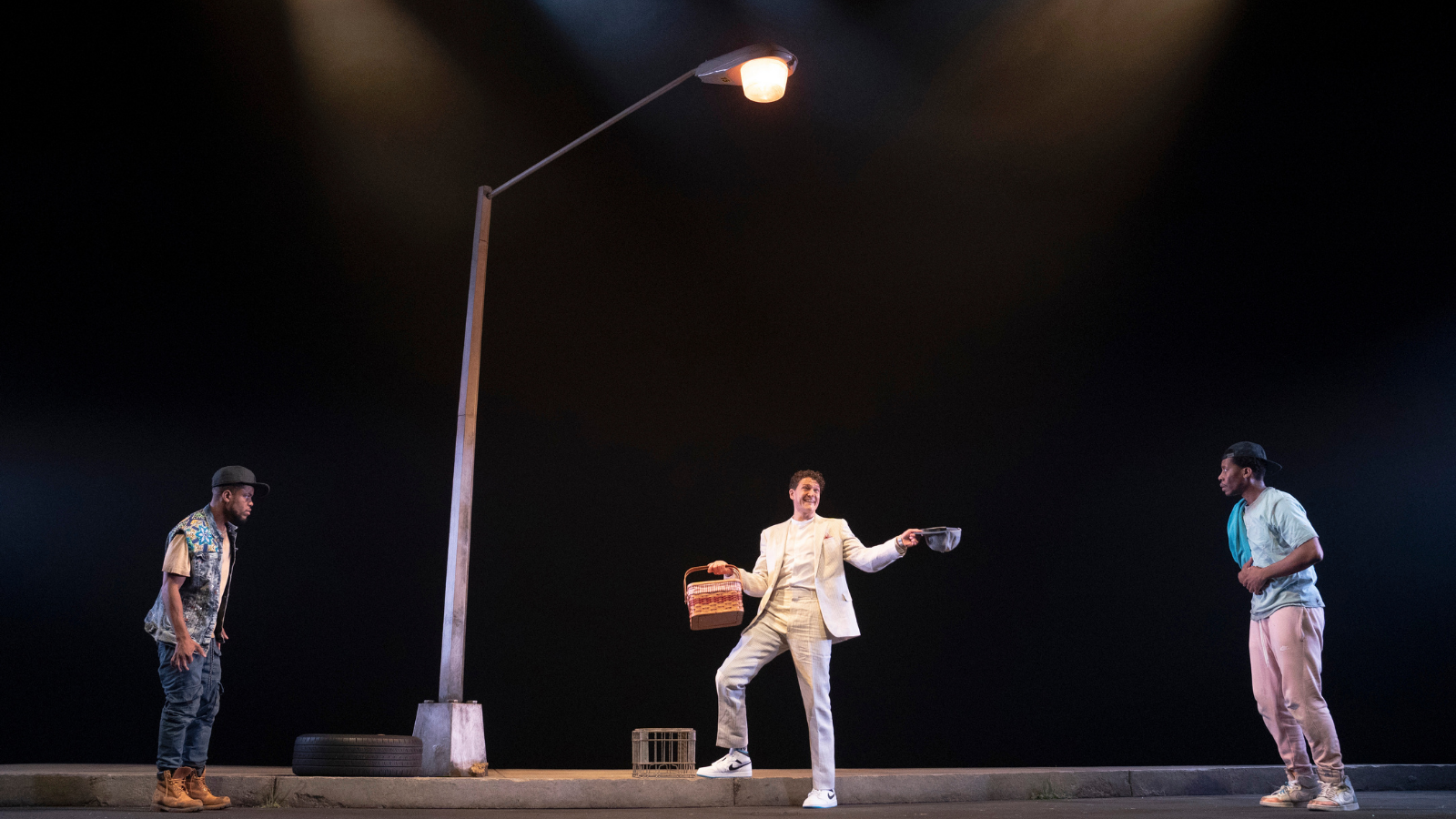 A promising Sun is dawning at the August Wilson Theatre, and not just because Broadway is officially back. Pass Over, a mostly captivating one-acter by Antoinette Chinonye Nwandu, represents a hopeful new chapter in Broadway history, not only as the first play staged since the COVID-19 lockdown, but as the first of seven by Black writers to be produced this season.

A spiritual successor to Waiting for Godot, it also (perhaps most importantly) signals a return of the contemporary Drama of Ideas to the country’s biggest theatrical platform. Neither a revival nor a comedic star-vehicle, it is an anomaly in the recent Broadway landscape: a simply staged, plain-spoken play about our current sociopolitical state.

But, of course, Moses (Jon Michael Hill) and Kitch (Namir Smallwood) are not aware of any of this. They simply while away the hours on their street, trying to avoid joining the long list of their friends who have been murdered by police, and dreaming of the day they can “pass over” onto the promised land––be that Heaven, or simply a better life for the two young Black men.

Hill and Smallwood’s chemistry instantly betrays their character’s constant reminders that they are not brothers, as the two share a lived-in rapport that has likely only grown since they performed the roles at Lincoln Center three years ago. (The play is strangely being billed as a new play, despite having had a New York premiere in 2018 and a Spike Lee-recorded production at Chicago’s Steppenwolf Theatre the year prior.)

Their chemistry is perhaps too good for their roles, though, as the script endures long periods where the duo’s personalities become rather indistinguishable and generic––not at the fault of the skilled actors. The white, immediately out-of-place stranger who arrives with alarmingly suspicious charm, does not suffer from this same lack of character personality.

Played by a terrifically game Gabriel Ebert, he brings to mind a Twilight Zone Colonel Sanders, offering the men food and music with an unnerving hospitality. He also serves up the chance for the play to wade directly into the waters of racial politics which, though it’d been doing fine enough at that on its own, accentuates some of the clunkiness of Nwandu’s book.

A bare discussion of who gets to say the N-word, for example, seems about a decade too old, and the play’s sudden turns to brutality and trauma are often jarring in their by-the-book inclusions. Because of course traumatic violence must appear––for all its sharp performances and often brilliant depiction of Black hope and hopelessness, little happens that can’t be seen from a mile away. The arrival of a racist police officer (also played by Ebert) goes through the expected beats one can expect from a clichéd character, and takes away from the play’s otherwise sterling observations.

Then again, with a brisk 95-minute runtime and a clear thesis in mind, Nwandu cannot be faulted too heavily for getting to her point efficiently.

The stripped-down approach works better in the staging, with deft direction from Danya Taymor and a cleverly unfussy set by Wilson Chin. Marcus Doshi’s smart lighting design reveals the full beauty of the always-terrific Chin’s work late in the play to astonishing effect.

The ending, complicated by a bewildering––and, I would say, unnecessary––bestowal of grace, is thematically lopsided but theatrically stunning. Pass Over, with its flaws, beauties, and contradictions, is much the same, but heralds an electric new moment in highly-visible American theatre.

“Pass Over” plays at the August Wilson Theatre on 52nd Street through October 10, 2021. For tickets, visit here.