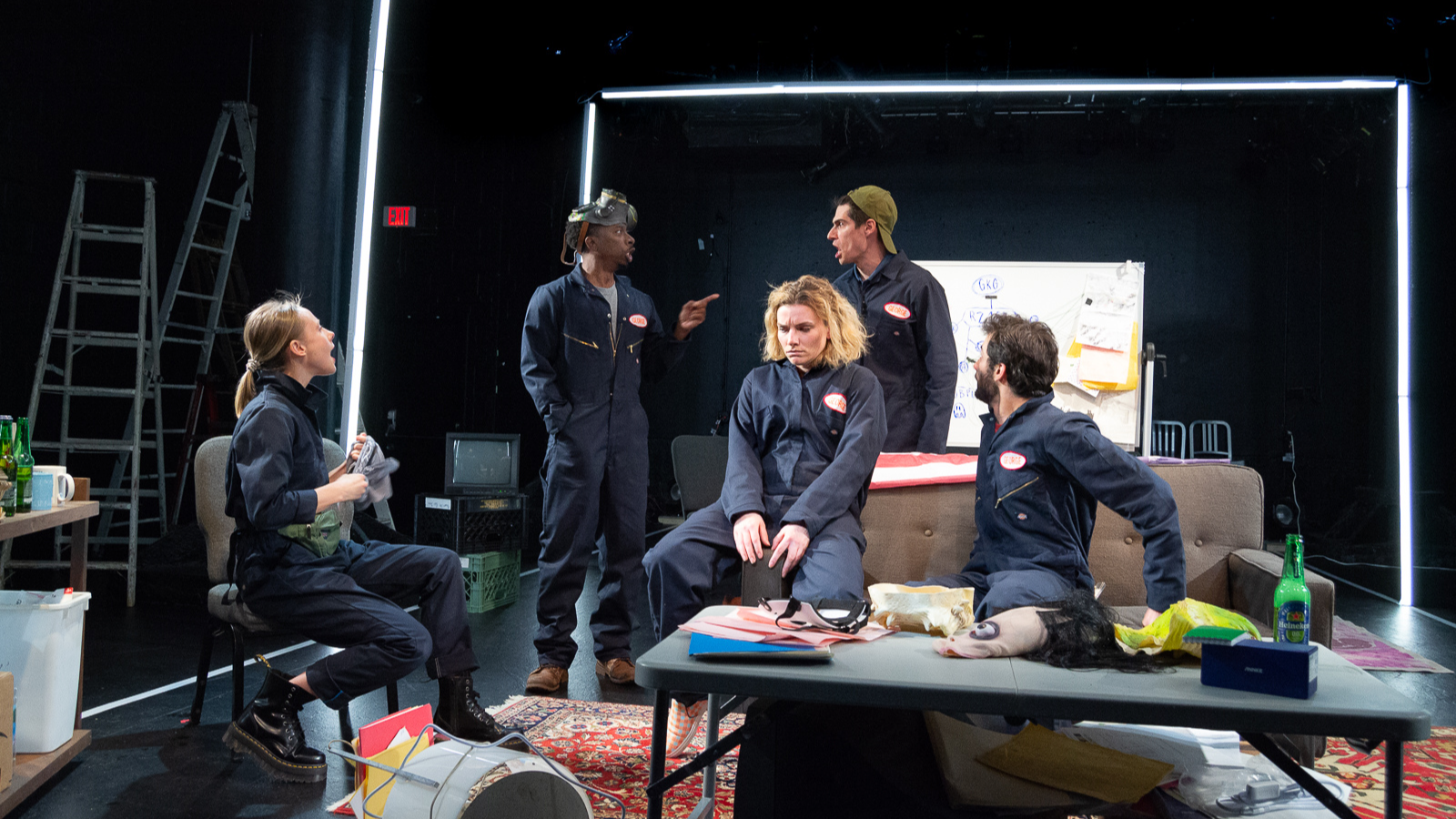 In keeping with the world-ending paranoia this season (and the possible end of Twitter) tends to bring about, two New York premieres of plays that opened last week have taken to absurdism as a way of sorting out the mania. Just off-Broadway, The New Group presents Will Arbery’s Evanston Salt Costs Climbing, a jerky look at the psychological effects some of America’s dying habits are having on those who know no other way. Downtown, off-off-Broadway, the Bridge Production Group brings Samuel Buggeln’s translation of Frédéric Sonntag’s George Kaplan, a fun, shifty little play that’s as European as the righteous storming of the Bastille and the failures of the Italian army. Each provides sinister, sideways pleasures though, if I had to choose, the poetic ambition of the former is toppled by the sneaky success of the latter.

You can feel the chill rushing through the Danya Taymor-directed Evanston. In Matt Saunders’ salt silo set, the play’s characters, who speak in blunt, abnormal outbursts, could just as easily be flightless planes in an abandoned hangar. Hauntingly lit by Isabella Byrd, and with Mikaal Sulaiman’s often spectral sound design, they amble around a desolate Chicago suburb in search of a salvation that might never come. Arbery certainly never hands it to them, and an uncharitable reading would even go as far as saying he sideswipes their dignity with his writerly machinations.

In 2014, Basil (Ken Leung) and Peter (Jeb Kreager) are preparing for a long shift salting icy roads while their boss Maiworm (Quincy Tyler Bernstine) mulls over how to tell them that a new, eco-friendly method of warming the pavement could soon put them out of a job. At home, her daughter Jane Jr. (Rachel Sachnoff) is aimless and suicidal. To a degree, they all are. Each one perceives some vision of an incoming end, whether hallucinatory or in the newspaper articles Maiworm half-proudly announces in the breakroom—the modern mechanism would guarantee her a higher role in the city planning world to which she earnestly aspires.

The play sees their despair crescendo even as Arbery’s insistence on forcing absurdism onto their pain derails the possibility of finding catharsis through that philosophy’s existential insight. Peter blurts out his horrible inner thoughts, which include killing his wife, with Arbery and Taymor seeking the same laughs here that they do from his and Basil’s insufferable Abbott and Costello routines. Intimations of sex and warmth are stamped out by the production’s brutality, with only a handful of scenes allowing the characters to merely exist without being subjected to a masturbatory dramaturgical thesis that feels disingenuous and unearned.

An ingenious flash forward, suggesting that our world’s knowledge of the anxiety that our impending doom causes us still yields no actual improvement, is masterful but not enough to salvage the writing. The performances, however, are ferociously good, with Bernstine reaching levels of astute folly and Leung delivering a fearless study of an immigrant driven to near-schizophrenia.

In an equally icy set, director Max Hunter gleefully unlocks this French puzzle box of a play, deeply paranoid even as it mocks conspiracy, making dumbasses out of anyone seeking larger meaning. A triptych, it begins with five members of a would-be radical group hidden behind threatening masks as they prepare to announce their manifesto to the tiny tripod ahead of them. The trouble is they can’t decide what it is they are against, or even here for—only that step three of their plan is to “implement media hoaxes.” The anonymity of their cause holds them back from their pathetic nonymous aspirations. They don’t get to argue causes and ideals because they’re bickering over whether their gathering even constitutes a meeting.

Such critiques of democracy, of the elemental failures in allowing everyone a valid opinion, permeate the work, with its sometimes juvenile but always intriguing observations. The fivesome—Christina Toth, Elisha Lawson, Max Samuels, Campbell Symes, and a fiery Michael DeFilippis—move deeper through Thomas Jenkeleit’s set, lit with hard neon lines by Conor Mulligan. They transform into a screenwriters’ room, callously devising ideas as to why a government might invade another, and a meeting of shadowy operatives, trying their ridiculous best to find out who George Kaplan is.

Like the chicken motif that runs through each of the play’s sections (absurdism, I tell you), George Kaplan constantly pops his head in. We’re told, late in the play, that the name applies to a Lithuanian physicist, the creator of The Phantom action hero, and several works by Buñuel, Salinger, and Hitchcock: all dubious claims, save for that last one. In the master of suspense’s North by Northwest, it is the name for whom the hero is mistaken. It all means nothing, and that’s sort of the point.

Such dry, European folly is not for everyone; the audience around me seemed as if they were watching a transmission from another planet. If the play is not laugh-out-loud funny, it is because it, and Hunter’s direction, trust us to hold slippery characters, ideas, and the mercurial nature of meaning all at once—but it is very funny. Beginning in someone’s basement, with grad school-types waxing metaphysical over cans of beer and ending at “deep state” levels of “power” where no amount of espionage can attain a proper answer, the higher the work goes, the dumber its inhabitants get, and the more eager they are to pass on blame. Who’s the dumbass now?

‍Evanston Salt Costs Climbing is in performance through December 18 at The Pershing Square Signature Center on West 42nd Street in New York City. For tickets and more information, visit here.

‍George Kaplan is in performance through December 3 at the New Ohio Theatre on Christopher Street in New York City. For tickets and more information, visit here.