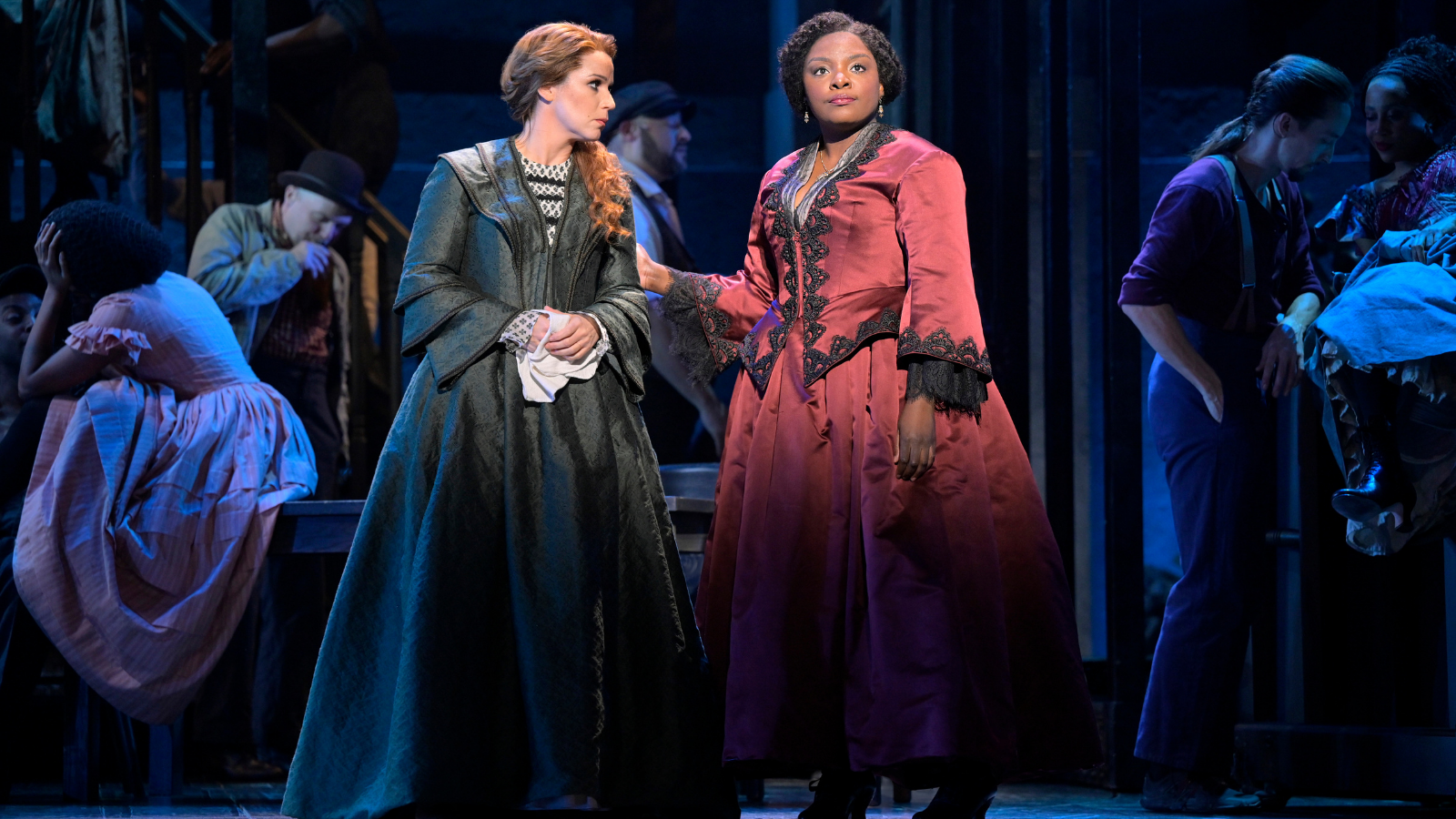 Ahh, a new megamusical is in town. It’s hard to remember the last time one of these opened up. Not the over-bloated film adaptations that continue to plague Broadway stages, but the gargantuan originals of the ‘80s and ‘90s. Towering sets, huge ensembles, grandiose plots told through so-so methods that nevertheless win you over. Paradise Square, now at the Barrymore Theatre, qualifies on all these counts, with a healthy dose of “America is a beautiful melting pot” earnestness that has all but been erased by a more timely (more accurate) understanding of the country’s jumbled ingredients.

And you know what? I enjoyed it. Moisés Kaufman sharply directs a fantastic cast way beyond what the thrown-together book provides. I suppose it's appropriate that a show about a New York neighborhood that served as a joyous petri dish for the country’s many communities would have three different writers: Christina Anderson, Craig Lucas, and Larry Kirwan. The result is as tumultuous as the story itself.

Manhattan’s Five Points, allegedly the country’s first slum, was a rough neighborhood better known for its crime and disease than the futuristic utopia the musical presents: a place where Black Americans, Irish immigrants, and other marginalized characters live and love without any -isms driving them apart. They congregate at Nelly O’Brien's (Joaquina Kalukango) titular bar, as the country powers through the Civil War and wealthy politicians’ attempts to divide them. As simplified as some of these dynamics seem, it’s a cute idea to entertain, and one that gives us a diverse cast which neither scurries into “color blindness” nor pretends race is not a factor.

Kalukango is a born star, displaying a completely different, equally fully-realized skillset from her Tony-nominated role in last season’s Slave Play. She commits fiercely to the book scenes — perhaps fiercely enough to reveal some of its flaws — and brings the house down every time she sings. Her Nelly escapes the ‘determined, ahead-of-her-time woman’ archetype these roles can often become, fleshing out the character’s humanity in a searing, memorable way. She is matched in magnetism by Chilina Kennedy in the role of Annie, Nelly’s tough sister-in-law. Kennedy does not chew scenery, does not eat it up — she has a hearty Irish stew onstage, leaving no crumbs. The two women anchor the production even as it sprawls further from cohesion on Allen Moyer’s industrial set.

The majority of the songs are serviceable at best. Jason Howland’s score sometimes approximates top-notch melody, but mostly lands in an anonymous no-man’s-land of ballads, chants, and ditties. A jam sesh built around “Camptown Ladies,” meant to bring together the show’s Black, Irish, and All-American Stephen Foster styles, feels like a first idea that made it onto the finished script unedited. The lyrics, by Masi Asare and Nathan Tysen, are equally workmanlike and more syrupy than endearingly sentimental. What the cast does to elevate the show’s ho-hum music is close to a miracle.

The choreography—some of Bill T. Jones’ best work—achieves what the music thinks it can, locating dance as the common language between the area’s Black and Irish residents. Aside from the bodily lyricism Jones excels at, several of the production’s best sequences involve direct mashups of the two cultures’ take on step dancing. The ensemble excels at both styles, and it is encouraging to see leads ably taking on some of the steps as well. As two hungry young dancers, Sidney DuPont and A.J. Shively imbue their dancing with the same specificity they do their numbers, and the results are often electric.

Megamusicals have rarely, if ever, gotten great reviews from the jump, and I suspect this one will be no different. Is this the next Phantom or Les Miserables? No, but as far as these things go, it’s a pretty excellent example of the form: a rousing throwback to old-fashioned American entertainment, cobbled together from strange, disparate sources but somehow, somehow still going.

Paradise Square is in performance at the Barrymore Theatre on West 47th Street in New York City. For tickets and more information, visit here.