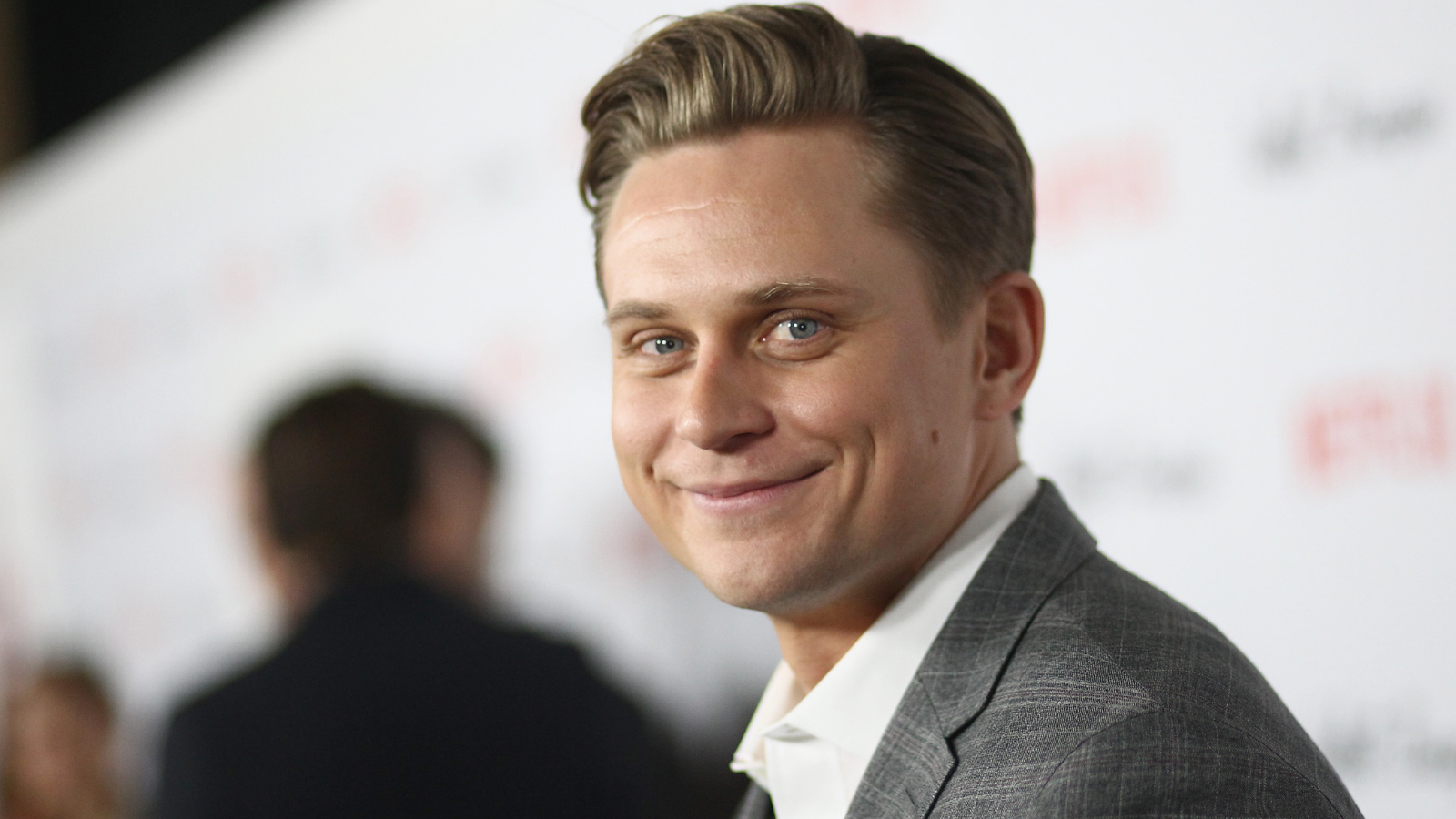 Billy Magnussen | Photo by Tommaso Boddi/Getty Images for Netflix
By
Juan A. Ramirez
No items found.
on
Category:
Features

For the uninitiated, Billy Magnussen is someone for whom you probably don’t actually need an initiation. He has turned in a number of great performances in well-received films like Game Night and Ingrid Goes West. He’s also made quite a name for himself in the theatre world, picking up a Tony nomination for his work on Vanya and Sonia and Masha and Spike, and playing Rapunzel’s Prince in the film adaptation of Into the Woods. Or maybe you saw him get dragged into a painting by some murderous monkeys in Velvet Buzzsaw––a film I maintain is Actually Good.

You’ll keep seeing his ‘40s leading man charisma later this year in the Sopranos prequel, The Many Saints of Newark, and the ever-delayed 007 film, No Time to Die, but Magnussen has not forgotten (and misses!) the stage. A self-described “theatre YouTube nerd” obsessed with Bill Irwin’s clowning, he currently stars with fellow thespian Cristin Milioti in the new HBO Max series Made for Love.

His role as tech billionaire Byron Gogol asks, “What if literally any Silicon Valley overlord had an ounce of charm?” and might finally get him the recognition his body of work deserves. I wish I could say I know first-hand that Magnussen’s contagious magnetism travels past the screen, but our recent conversation about his theatrical roots took place over Zoom. Nevertheless, his enthusiasm for theatre talk took me by surprise, winning me over immediately.

Our conversation has been edited for length and clarity.‍

Always. I could see you playing Herbie in 20 years.‍

Yes, with Imelda Staunton on the West End!‍

Right, right. You know what I saw last time I was out there? Follies. Oh my God, this production was absolutely unbelievable. You know when you’re loving theatre, but you literally start crying and it’s like, “Aw, you sons of bitches…”‍

I mean, also, that show is just depressing as hell.‍

Truly! I’m telling you, it was fantastic.‍

Do you make a point to find theatre wherever you go?‍

I'm all about theatre. I think it's the best art form; there's just this beautiful ballet that happens between the audience and the performers every night. That energy exchange is worth it. And then it's done forever, you know.‍

Do you like not having a record of your performances? Are you not an actor who watches his work afterwards?‍

No, I do. [Chuckles.] If you're a carpenter and you build a table, you kind of have to look at the table. I just think there is no better drug than live performance. You can kind of relate to reviews or input from your directors, but you can feel the experience yourself. It’s so real and you have to be aware of it.‍

Your first major project was the 2007 Broadway revival of The Ritz. Did you get into acting through theatre?‍

My dream was always to be on Broadway, and I was fortunate enough to get cast in the ensemble of the Ritz. And, yeah, it was this weird snowball effect from there; it was amazing. My job was to be in a Speedo and walk across the stage. I remember bringing my parents to opening night like, “Mom, Dad, I’m on Broadway!” And then they see that... ‍

Even now that you’re doing a lot more screen work, you’re still surrounded by theatre people; I’m thinking of Cristin in Made for Love and Black Mirror, or Jane Krakowski and Titus Burgess in Unbreakable Kimmy Schmidt. Does a project with theatre names attached call out to you?‍

Not really, but I do think there is this language and understanding that happens with a performer that has a theatre background; you can communicate differently. You talk more broadly about the story and the beats of the scene, rather than individual moments. There's no one like theatre performers. You cut your teeth doing theatre because it's exercise, it's a workout. It is a marathon.‍

When you’re entering a scene with another stage veteran like Cristin, do you tackle it like you would a stage performance?‍

I just want to say Cristin Milioti is one of the most wonderful, gracious, elegant actors in the world, and I truly adore her. And we’ve been friends for 10 years! There are scenes we came to where we thought, “Let's really play it like a play, and let it live and breathe as it goes.”

I get really mad at Cristin because she makes me laugh. I get pissed off because I have to be yelling, “Stop making me laugh! Stop making fart noises!”‍

She's kind of the worst person to work with because you quickly realize how bad you are as a performer as soon as you look at how gracious and wonderful she is.‍

How did you two meet?‍

We played husband and wife in this film The Brass Teapot ten years ago. She was cut out of most of the film, but when I was doing Vanya, she was doing Once next door. I was at the Golden and she was at the Jacobs, and I would always go over during intermission and bother her backstage.

If you’ve seen that original production, you know the set is just a huge bar and there's those swinging doors and windows, and I would always be in my Prince outfit making faces at her. ‍

Did you get to see each other’s full performances in those shows?‍

Oh, of course. Like I said, she’s one of the most talented actors alive. I know. She brought me to tears, that's for sure. When she was singing that song, where she's at the piano…‍

Now I’m picturing you running around Broadway in that Prince outfit. Do you miss those backstage shenanigans? ‍

I miss theatre so much. There's this intense family community you gain through the theatre, it's just beautiful. It's a beautiful community that New York has created. But, you know, the dream is to be on the West End.‍

Broadway is the elite here, and I think the West End is the elite for Europe. Just to be a part of that history, to be on one of those stages… [If gazing pensively into the Zoom-stance exists, this would be it]‍

Did you make any West End moves when you were over there shooting the Bond movie?‍

Oh, yeah. They were all like, “Please leave, we’re proper actors.” I think there could be an opportunity as long as I pursue it.‍

What I love about theatre over there is how varied everything is, and you’re someone I’ve seen in very different types of stories.‍

I'm the kind of performer where, for me, it's more about the project at the end of the day, and what story you're trying to tell, rather than the individual character in the piece. It really should be about the project as a whole. I find it's always a better project when everyone's focused on the community, because it’s in a collaborative art form. So why not, you know, keep the focus there?.

You come to each project differently and what it brings out. In Made for Love, what Byron has become for me, I did not expect––what he has blossomed into, what I really discovered and loved in character.‍

Well, I think he's the personification of toxic masculinity. We––well, I don't want to assume your gender––‍

––we have been put in a world of what he has: looking good, having the money, being successful, being loud, being aggressive. That is what a man is; he has control of his life. And then I slowly reveal that that is the facade that Byron is hiding behind. He's just a scared boy, which is what we all are. Putting the light up to that has been the most exciting thing in this process; it is looking behind the curtain of toxic masculinity of a guy who’s scared and wants to feel loved.

A lot of people describe him as this douchey sociopath, but the journey that [series creators] Alissa Nutting and Christine Lee have created for this character is a story of a scared individual trying to connect. The show is just about miscommunication, like love is all the time.

Made for Love is now streaming on HBO Max.