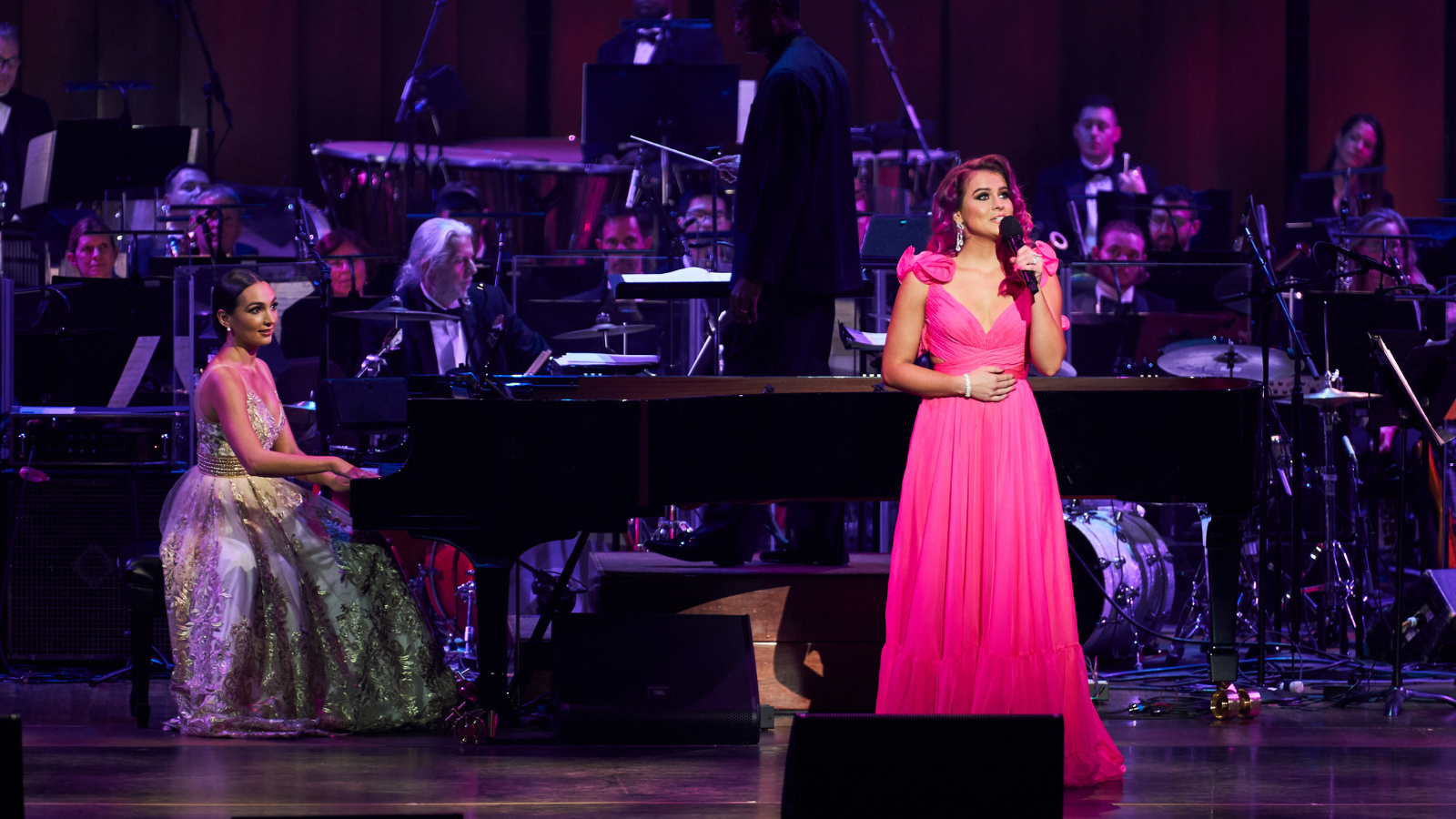 Two options. You either know Abigail Barlow and Emily Bear, or you are about to. The newest songwriting duo quickly (and I mean quickly) rose to fame via TikTok at the start of this year when they started composing a musicalilzed version of Netflix’s Bridgerton.

Since posting their first video back in January of this year, the two creators have garnered millions upon millions of views. This past month, they released the Unofficial Bridgerton Musical concept album which has topped the charts ever since. (And yes, it really is as good as everyone says.) Now, the pair joins a star-studded roster of performers for The Kennedy Center’s 50th Anniversary Celebration Concert which was taped a few weeks ago and will premiere on PBS tonight.

We spoke with Barlow and Bear via Zoom from their apartments in Los Angeles about celebrating the historic institution’s special anniversary, their admiration of Darren Criss, and what comes next. Our conversation has been edited for clarity and length.

Theatrely: I love how last Christmas when Bridgerton came out, I sat in bed and just binged the latest series to drop on Netflix and went on with my day. You both watched it and your lives changed completely. So first question, how are you both?

Abigail Barlow: I can't tell you how great it's going. It's fantastic and we're living a dream — it's amazing.

Emily Bear: We're still sort of riding this high of the album release but to say everything is wild right now would be an understatement.

Do you ever take a step back and reflect on these past nine months?

Barlow: I literally just finished doing that about 10 minutes ago. I think about it all the time. It's crazy just to step back and look at it from a bird's eye view and really see all the work we did — we put our heart and soul into this project. Such a wonderful memory and experience that we will never forget.

Bear: We were both so frustrated with our music and our careers before this happened and we felt like we weren't being taken seriously. To look at the difference from this time last year to now, it's really special.

One of the most interesting parts of watching both of you over the past year is your dedication to your fans and really making sure they are along with you for every step of the way. What do they mean to you?

Bear: I mean, the reason this whole thing happened in the first place. What we essentially did is just get inspired by a piece of art and then seeing millions of other people get inspired by something we created is still extremely humbling. I don't even know how to put it into words. It still leaves me speechless. I also think the timing of it was so perfect for us. It was in the middle of winter and one of the worst parts of Covid and everyone felt so disconnected especially after a holiday season that many were not able to travel and see their families during. To be able to have something to look forward to every day and be passionate and excited about something again, along with millions of other people around the world and be connected to so many new people was wonderful.

So when the Kennedy Center called you and asked to perform at their 50th Anniversary, what was going through your mind?

Bear: I sent Abigail a screenshot of the email and I was like, is this real? This has to be a phishing scam.

Barlow: I've just been in a constant state of shock, like for literally nine straight months. We're just really grateful that we got the opportunity to be a small part of this.

Talk to me a little bit about your collaboration with Darren Criss.

Bear: Darren felt like a little bit of a connection to us because of how he got his start in the world with A Very Potter Musical — he basically had the same sort of kick-start career move that we did. He reached out to us and once we met we immediately hit it off. What started as a very introduction has turned into a really fun recurring partnership sort of thing. Plus he is just so lovely.

Barlow: Not to mention I love getting to sing with him!

Take me back to the night when you both are at the Kennedy Center and you hear Audra McDonald announce your names and you walk out and get to perform with the National Symphony Orchestra.

Barlow: I just re-lived it as you said it. It was truly crazy, a wonderful dream.

Bear: To be included in that kind of lineup for such a legendary iconic space. It was both surreal and ridiculous, in the best possible way! On a more personal level, hearing the music was so special. All of the instruments on the album are programmed, so not real. We both have been waiting to sling to hear it with a full orchestra. There is something about the magic of 65 musicians playing together. Being in that venue and all the incredible artists and the First Lady, the whole time we were just pinching ourselves.

I know one of the cornerstones of the Kennedy Center over the past 50 years has been their dedication to learning and the arts. You both are always inspiring your fans and teaching them every step of the way. What does arts education mean to you?

Barlow: We both got an incredible education. I think arts education should be available for everyone who wants to pursue that, no matter how old or young you are. It should always be included in every school system, and so we want to make that happen. It's really important to teach kids to follow their dreams.

So when you aren't composing your own albums - what are some of your favorite musicals to jam out to?

Barlow: I love Next to Normal. It's like my favorite musical. I love a little slice of life musical but I also love big American Broadway classics like 42nd Street, probably my favorite dance show.

Bear: I loved The Color Purple on Broadway so much. And as much as it is a cliché, Les Misérables will always have a special place in my heart whenever I hear that music. And honestly anything Sondheim.

Do you think we will ever see Bridgerton make it to the stage?

Barlow: Who knows is the answer right now. You know, we were given the permission to release the concept album and right now we can enjoy it for what it is. It is the start of Barlow and Bear and we're really excited to tell more stories.

Bear: The last nine months have sort of allowed a bunch of incredible opportunities to cross our paths that we never, ever would have dreamed of in a million years. There's a lot of really, really exciting upcoming projects like crossing into film and TV and also future stage shows. I know we're both really grateful to be able to wake up and tell the stories we want to, and go from there!

“The Kennedy Center At 50” premieres on PBS and the PBS Video App tonight, October 1 at 9pm ET.