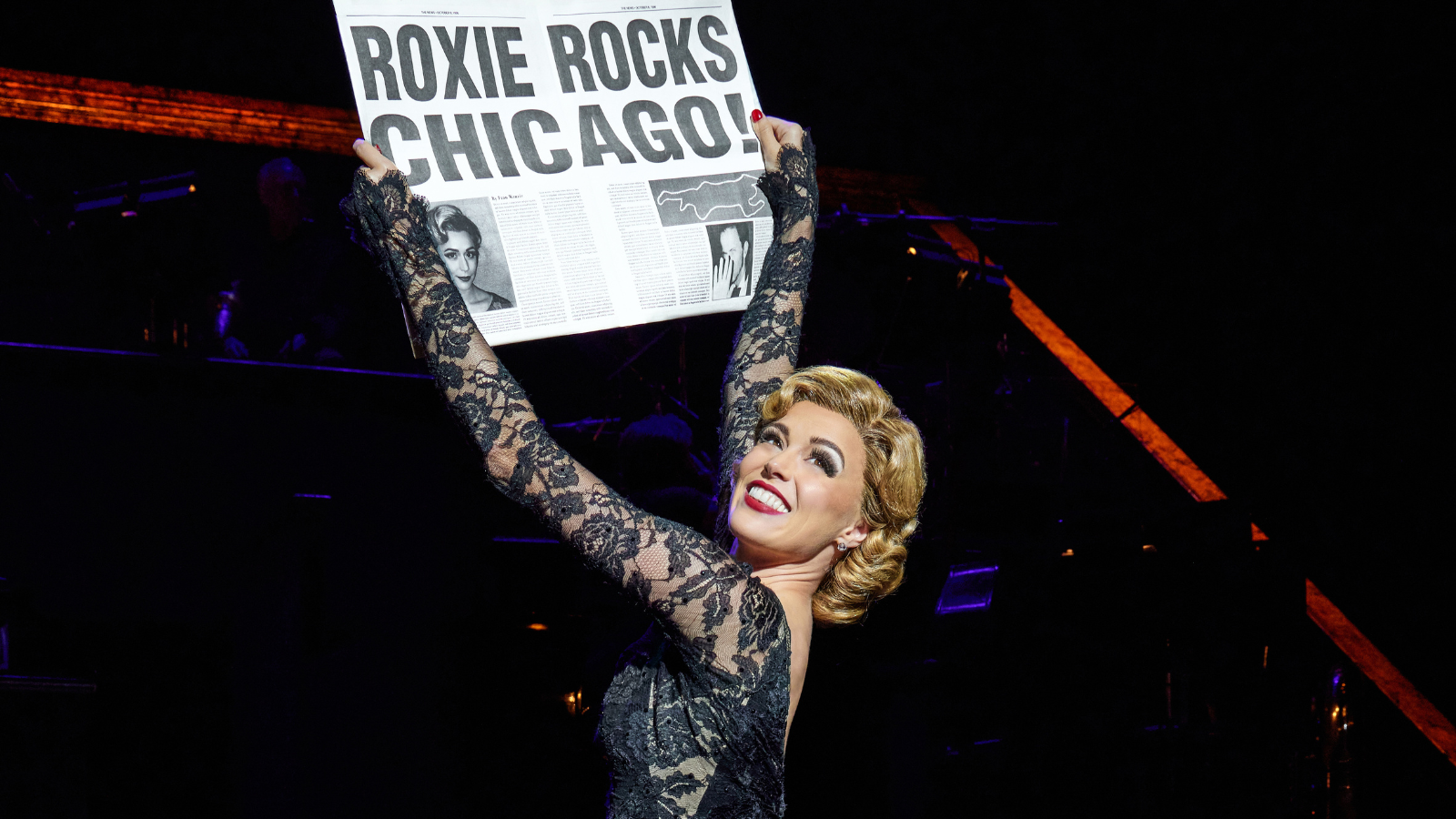 Stepping into the iconic black character heels of Broadway’s most charming murderess in a 25-years-running revival leaves every incoming Roxie in Chicago with the monumental task of bringing new life to a long-lived character, and after two and a half years, “The Search for Roxie Hart” winner Emma Pittman has finally introduced us to her Roxie: an irresistible cocktail of silly, sweet, and scandalous.

Beginning on YouTube in September of 2019, Broadway.com’s “The Search for Roxie Hart” embarked on an online journey to narrow down a list of self-tape auditions for Broadway’s next star, in hopes of finding a new, original talent. In December, three finalists were flown out to New York City to see Chicago and audition in front of the revival’s original Roxie and Velma, Ann Reinking and Bebe Neuwirth, as well as Chicago veteran Bianca Marroquín.

In contrast with the quarrels Roxie and Velma find themselves in throughout Chicago, Pittman and her two fellow contestants were able to find a safe space with each other to collaborate in their explorations of Roxie’s character.

“When we got into the space, we realized that the thing that makes Roxie an awesome character is that everyone makes it their own. No one’s going up there trying to be Gwen Verdon or Ann Reinking. Everyone is being themselves in Roxie. That’s why we can have people like Charlotte d’Amboise, and Pamela Anderson, and myself come into this role, and we’re all super valuable and individual,” she shares.

As Pittman performed in front of Chicago’s greats, she had the once-in-a-lifetime opportunity to be coached directly by some of the greatest talents behind the character she would soon become the next to portray, before she would even step into a rehearsal room two years later. When Pittman finally prepared to take the stage in 2022, she had carried the late Reinking’s (who passed away in 2020) wisdom with her along on the ride.

“I remember doing the monologue and Ann Reinking stopping me and being like, hey, we really need to see her vulnerability. Another thing that Annie and Bebe really encouraged was to be myself and allow my silly quirks to be a part of her, because that’s who she is. She’s goofy, and endearing, and cute, but it’s not coming from a place of wanting attention, that’s just who she is.”

Now, Reinking’s legacy lives on through Pittman’s application of her advice, as Pittman’s own personality shines through a bright-eyed Roxie with a beaming smile onstage, dazzling the audience with an intriguing blend of ingenue and femme fatale. Throughout her process of discovering “her” Roxie, she shares that she first worked through understanding Roxie, then understanding her own relationship to Roxie’s story and identity.

“I remember in the beginning of the rehearsal process wanting to get her story straight,” Pittman notes. “I know that because Chicago is so stylized in Vaudeville, it can be easy to play up the jokes, but what makes Vaudeville so effective is when it’s based in a truth and a reality for the character, so I really wanted to make sure I knew, where was she from? What was her background? Why did she meet Amos, why was he important for her to stay around, and why did she start to fool around? Finding those exact why’s were really important to me to make sure that there was a lot of truth in her storytelling so that the audience doesn’t just see her being silly, they see an innocence to her, a bright-eyed, bushy-tailed sweetheart that…gets a couple of things wrong,” she chuckles, “but she’s trying.”

Then, Pittman connected the dots between her own heart and that of Roxie’s: “She and I are very bubbly and positive, and I would say that we’re also very present. We’re not very calculated people, I don’t think very far ahead…in comparison, with Velma, everything she does is very calculated and thought through, she’s always a couple of steps ahead. I think Roxie is very in the moment.”

As Broadway’s longest-running revival and second longest-running production in general, it’s crucial that Roxie gets a refresh with every actress that takes on telling her complicated story. Pittman stresses the most important question to ask oneself when playing Roxie: “What parts of ourselves can we bring into this role to make it ours?” She references the most recent Roxie successor before herself, as a golden example: “If you saw Pamela, so many things in the text related to her real life, like, when she says the line ‘what if the world slandered my name?’ she just gives this delicious, quick, coy look to the audience, and there’s this immediate eruption of laughter from the audience,” she shares, with a palpable fondness for Anderson’s performance. “It’s just fabulous how this part is so malleable to each performer. It just goes to show that when it’s great text, it can live forever.”