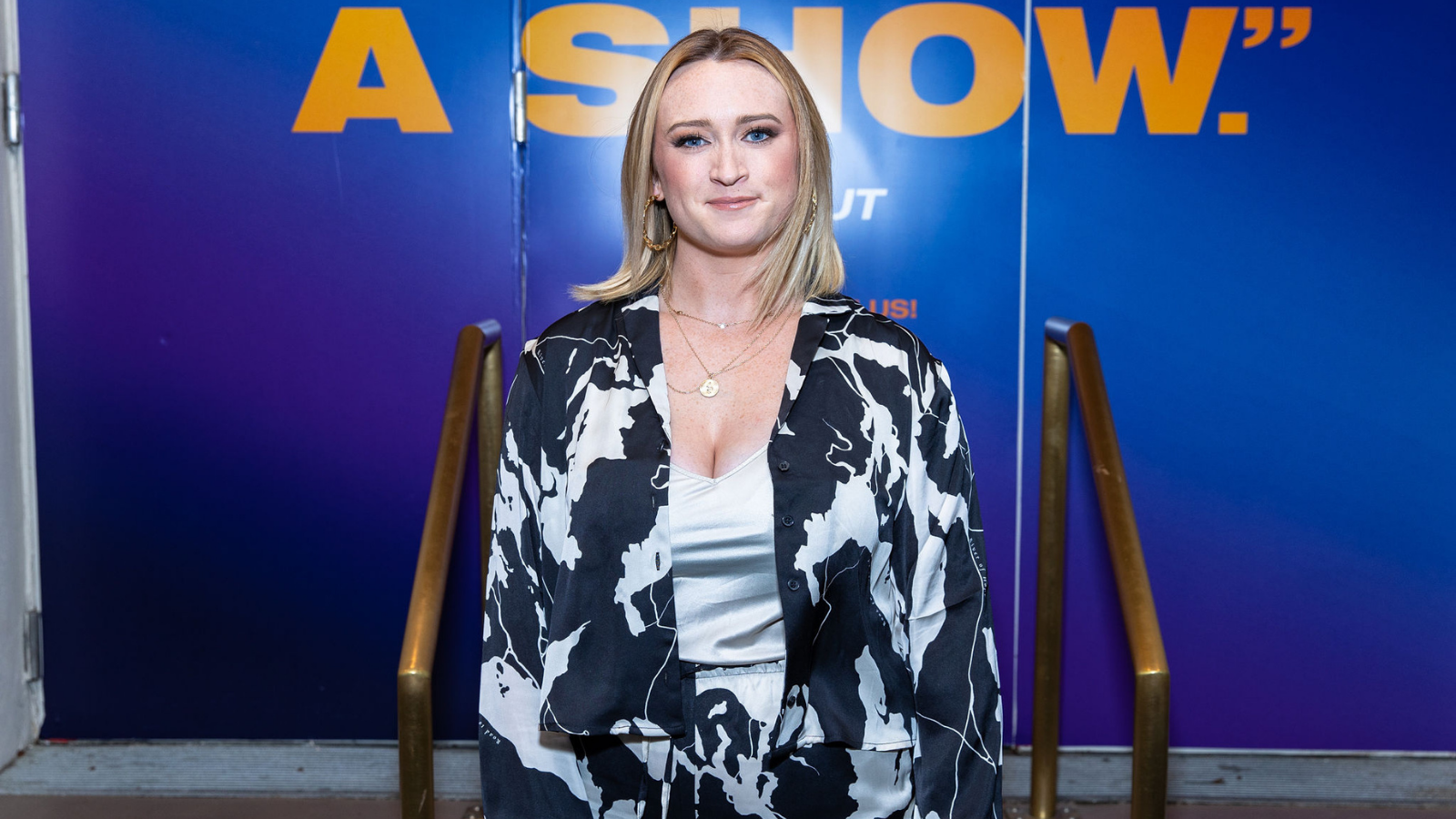 The hit improv hip-hop sensation Freestyle Love Supreme is officially back on Broadway and we caught up with beatboxer extraordinaire Kaila Mullady a.k.a. Kaiser Rözé to chat all about the show and making it to the Great White Way.

Our conversation has been edited and condensed for clarity.

Did you ever imagine that beatboxing could lead you to Broadway?‍

I’m like, WHAT?! I still can't imagine it! There’s no way I ever thought I’d be on Broadway. Beatboxing and improv comedy are two of my favorite things in the world, but those are two art forms that are very underground. A lot of the time, you see improv shows in basements…these two art forms that are extremely underrated. Beatboxing is incredible; nowadays singers get paid millions of dollars to not even write their own music…they auto tune their voice, they lip sync when they perform live, but with beatboxing there’s no way for me to fake what I’m doing. Beatboxers around the world are literally creating sounds that DJs are only supposed to do, or sounds that instruments that have been around for thousands of years are supposed to do. Improvisers are coming on stage and making up something completely before your eyes. They don’t get enough credit. I’ve always had so much respect for these two art forms, and to see them on a Broadway stage makes me so happy and proud.

This show seems like such a collaborative effort to me, so I’d love to hear about your relationship with the cast: how do you guys bond with each other in your downtime? How do you show up for each other onstage?

We have had a lot of guests come in this year, and we meet 10 to 15 minutes before every show to warm up and jam together, and right before we go on stage every single night, you hug everyone that’s about to go onstage, look them in the eye and say: “I’ve got your back.” It’s something that we’ve done since I've been in the crew, and it’s pretty normal in the improv world, but we’ve had some guests like Mark Kelly from the Roots, and he was like, “you guys do this all the time?” When Daniel Watts from Tina Turner came, he was like, “you do this before every show?” and I said “yes, don’t you do this in Tina?” and he’s like “...nope.” The same thing happened with Jessica Vosk! I would assume that every Broadway show would do that, right? The only way that our show works is if we feel connected to each other, if we feel safe, and if we’re having fun.

I can definitely tell just from photos I’ve seen of the show that you all have such a good relationship, and you feel so comfortable with each other. I can only imagine how important that is with how vulnerable improvisation can be.

Absolutely, you really have to trust the person in front of you! And you have to understand each other. When you know what the other person’s strengths are, or how they create music…for me, as the person who’s doing percussion, and I’m doing a beat, if Christopher Jackson comes up, I know what his style is, so I know how to create a beat that’s going to let him shine. But his style is very different from when Lin comes up. They have completely different styles. so the more that I know my friends and my castmates rhythmically and musically I can also make them shine. It’s the same thing for them, too, they know who I am and what I like to do and how I shine. They can make space for me to be my best self. Our show is really like The Avengers, and everybody is just their own superhero. Once you know each other’s superpowers, then we know in the moment, whose superpower is going to make this moment the best for the audience?

That is definitely one of the most lovely things I’ve ever heard about a Broadway cast, and you’re right! Most people don’t do those hugs before the show, and they should. I’m definitely going to share this article to my social media with a screaming caption: “y’all need to hug each other more!”

Yes! It really makes a difference.

I saw that outside of being a performer, you’re very much an educator, that’s been a huge part of your career for many years now, yes?

I would consider myself more of a facilitator than a teacher, because I don’t think I have that much to teach the kids, everybody has their own superpowers and I just want to help people feel confident enough to realize what their superpowers are.

A lot of my friends who are educators always share the sentiment that their students teach them as much as they teach their students. Is there something you’ve learned about performance or beatboxing from one of your students?

That really is true. For many years, I worked at a school for blind students and students with different abilities, and I would wake up at 6 AM and have to take the train two hours to the Bronx, and maybe it would be a cold day, maybe I didn’t have a seat on the train and I had to stand the whole time…I’m walking and it’s raining, and I’m having this “woe is me” inner monologue. Then, I’d get to the school where all of these students had different abilities and different disabilities, and every single day when I walked through the door, they had the biggest smile on their face. They’re the happiest souls I have ever met in my entire life. I would walk into that class and I'd be like, “why was I just getting aggravated about not sitting on a train?” I have so much to be grateful for, especially those students. They would make the best music and they had so much joy when they created music.

Just for everyone reading, could you share a little bit about Freestyle Love Supreme Academy and your role in it?

FLSA is a wonderfully inclusive space where there’s people from all around the world who come and learn exactly what we do onstage. They learn beatboxing, storytelling, how to freestyle, but really, they learn how to find the power of their voice…how to feel confident just sharing yourself and being present in the moment. I think those are the greatest gifts that these art forms, especially when put together, offer people. There are online classes people can take, there’s weekend popups, there’s one time workshops. If anyone is interested, check it out, and if anyone is reading this and is like, “that sounds terrifying,” then you should definitely check it out! Follow the fear. Once you do it, you’re going to realize it’s not scary at all. The people and community of FLS are the kindest souls. Everyone has your back.

If people want to learn more about beatboxing specifically, I have my own beatboxing education called The Academy of Noise that involves the work I’ve done with music therapy and speech therapy

Who is your dream surprise guest in the show?

We talk about this a lot. Aneesa and I are trying to manifest some people! Personally, of the beatboxing and improv world, I would love to have Reggie Watts or Beardyman. There’s also an incredible freestyler named Harry Mack who just destroys it online, he would be great. All of my childhood heroes would be incredible.

What’s a Broadway show that you think beatboxing could be seamlessly inserted into?

Moulin Rouge is already such a party vibe, why not throw it in there? Hadestown, too...the guy who is playing Hades (Patrick Page) is essentially doing the craziest bass technique I’ve ever heard in my entire life! I’ve never heard a human go that low.

And you’re going on the FLS National Tour in 2022, right?

Yes! I can’t wait to bring what we do to people who have never seen it and never had the opportunity to see it.

Which city are you most excited to visit on the tour?

I’ve been to most of the cities except for Detroit and San Diego, so I’m excited to check out those cities, but really, the reason why I’m excited about the tour is because anybody who comes to our show is the newest member of our crew. So much of our show is getting words from the audience, getting full stories even, where people tell a story about their life and things that have happened to them in the past, and a lot of the stories that we’ve been getting are very Northeastern. If we go to Seattle, the stories that we’re going to hear are going to be different because there’s a different culture there. The words that we’re going to get are going to be completely different, so it’s going to change our show with every city we go to, because that city is going to bring its vibes to us.

Beyond the tour…do you see yourself trying out any other roles or shows on Broadway in the future now that you’ve done this?

I mean, this has been so wild for me! For some people - like, Aneesa has done theatre her whole life - this was always their dream, but for me, I think as a beatboxer and an improviser, I just never assumed that I would be able to be in this world. It never really crossed my mind, but now that I’m here, I have such a love for theatre, so who knows? Maybe I’ll be Elphaba in the next ten years or so. This has definitely opened my eyes to a new world of possibilities, and I’m saying “yes” to it all.

Freestyle Love Supreme is now in performance at the Booth Theatre through January 2, 2022. For tickets and more information, visit here.