Chosen Families: Some by Blood, Some Found on Yahoo in WOLF PLAY — Review 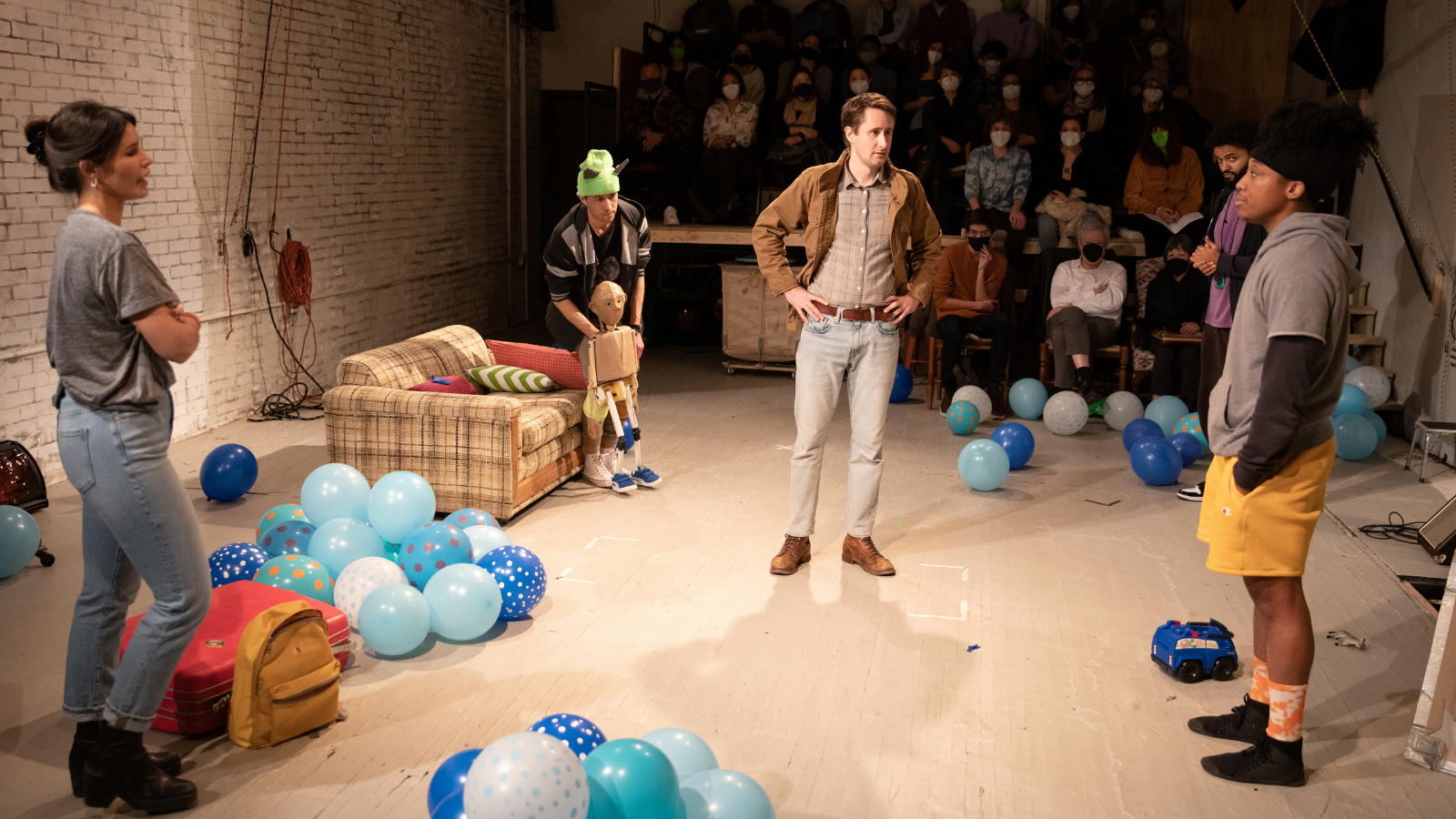 Theater has been back for a while. But was it really back until Soho Rep staged a play where the audience can only leave by walking directly through the action? Aaah, that’s the good stuff.

There is one complicating factor: that child, Jeenu, is a wolf. He explains so in an introductory monologue, delivered to us before the story kicks in: “I am not what you think you see. I am the wolf. Aow.”

Jeenu/Wolf is brought to life by Mitchell Winter in a really extraordinary tour de force. Winter moves breathlessly between two modes: voicing the child’s inner thoughts to us as asides, and operating a deceptively simple, wonderfully expressive puppet (designed by Amanda Villalobos) which interacts in Wolf-mode with the other characters.

Jeenu has been adopted online by Robin (Nicole Villamil), over the objections of both her partner Ash (Esco Jouléy), a professional boxer, and brother Ryan (Brandon Mendez Homer), who is also Ash’s trainer. Both view the arrangement, set up through “Yahoo Clubs,” as sketchy at best—though Ryan is selfishly concerned with keeping Ash focused on their training.

Tensions aren’t helped when Jeenu’s original adoptive father Peter (Aubie Merrylees) objects to the new home upon realizing the child “won’t have a father.” (Ash identifies as non-binary, and Robin left the details vague online.) Ash notes that this is rich coming from someone rehoming a six year old adopted child—and then proceeds to knock him one.

Ash punching Peter is the first of a few odd contrivances in Jung’s text. The character’s buried frustrations will later be fully explored, but sudden violence towards strangers does not seem like their way. It’s also hard to entirely buy that Robin would adopt Jeenu after only minimally consulting Ash (a whole ass child?). Later in the play, Ryan’s objections to the adoption will lead him to an extreme action, the cruelty of which feels at odds with the character we get to know in earlier scenes.

Of course, Wolf Play exists in a heightened reality all of its own, as Jung makes clear with that first line: “I am not what you think you see.” Time and place is vague. Dustin Wills’ pleasingly ramshackle production places the characters in a confined world all of their own. But the work also deals bluntly with bigotry, toxic masculinity and class conflict, all issues which feel inevitably tied to sociopolitical pressures. Jung is intent both on confronting our world’s inequities and crafting an unreality all her own, and the dueling interests sometimes clash.

Yet, that clash also produces some wonders. There is Winter’s amazing work as Jeenu/Wolf, which anchors the production. He first greets Ash with a bite to the arm. But the two gradually form a bond, forged over breakfast cereal and morning runs. Jeenu’s unexpected attachment to Ash reveals a gentler side to the child, which Winter plays beautifully. But he also captures Jeenu’s bouts of confusion and anguish with equal precision. At these moments Winter steps away from the puppet and runs circles around the Soho Rep space, howling and howling. It is simply electric.

Jouléy is incredible as Ash, a quiet presence brimming with barely-controlled anger. Ash’s connection with Jeenu is wonderfully moving. The two see in one another that same buried pain, that same overwhelming need to howl. Robin struggles with Jeenu’s greater attachment to Ash, and this anguish is also sweetly believable. Villamil is saddled with a less developed character, but finds truth in Robin’s own developing bond with Jeenu—much slower to develop than he and Ash’s, but no less deeply felt.

Even the strange arc of Peter, who comes to regret giving away Jeenu after separating from his depressive wife, proves compelling. His depiction and Merrylees’ performance lends humanity to a fairly awful man without ever shying away from his bigotry.

Ultimately, Wolf Play is a story of chosen families, of loving communities built out of nothing by those who know the pain of abandonment. It takes some time for the play to reach that emotional center, but when it does, it packs a punch. The story’s conclusion is deeply upsetting, and the play ends on a heart wrenching, unforgettable monologue which had the theater in tears.

Wolf Play is now in performance at Soho Rep, in association with Ma-Yi Theater Company, through March 20, 2022. For tickets and more information, visit here.