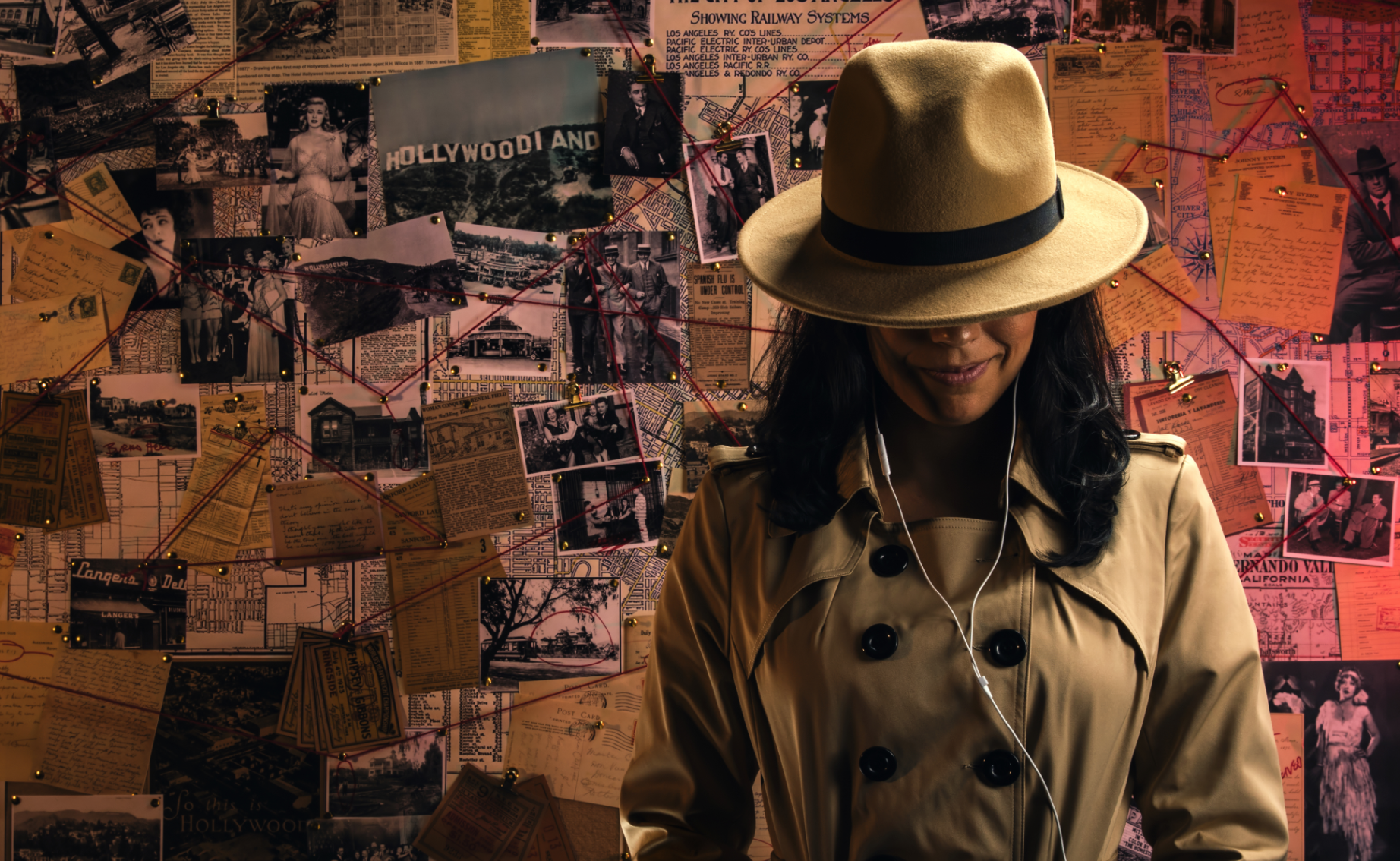 Photography by Jeff Lorch
By
Kobi Kassal
No items found.
on
Category:
Reviews

The Geffen Playhouse continues to strike gold with their interactive Zoom performances, a part of their Geffen Stayhouse series. Their latest offering comes in the form of a murder mystery whodunit as we put on our crime solving hats in the world premiere of Citizen Detective from playwright and director Chelsea Marcantel. The LA-based playhouse has seemed to find the perfect formula for pandemic theatre after their recent productions of The Present and Inside The Box. I urge all theatres in America right now to look to the creativity and ingenuity coming out of the Geffen and replicate it for their audiences.

About a week before the performance, we were sent a personality survey so that the production team can separate us into like-minded groups to help solve the case. The murder in question? The unsolved homicide of Hollywood director William Desmond Taylor. The infamous case has become quite well known over the years in pop culture; spanning movies, podcasts, and even some theatrical references—more on that later.

About 90 minutes prior to your performance, you are sent a secret URL with more information on the case and your specific suspect. It would behoove you to spend a good amount of time learning about the crime in question to get the most out of the experience. I had Mary Miles Minter, Taylor’s devoted protégé who has some mischievous evidence against her, but this is a spoiler free review!

As the play itself begins, we are introduced to famed mystery novelist Mickie McKittric (an enjoyable Mike Ostroski) who guides us through the evening in his “seminar” on becoming, you guessed it, citizen detectives. We are also joined early on by Andrea (the hilariously fantastic Paloma Nozicka), one of McKittrick's devoted and fervent crime-obsessed pupils. As we learn more about the case, we are sent into breakout rooms to discuss in further detail our particular suspects. I was on team “Mixed Nuts” with a rather adorable family from Los Angeles, a couple in Palm Springs, and a group in Cleveland. I fully recognize a big part depends on the willingness of your group to give in and play along, but I lucked out with a lively bunch.

Marcantel knows mystery thrillers work in modern America, there is a reason why Clue topped the list of top performed plays earlier this year. She keeps the audience moving along in this brisk 85 minute performance. If you think you know what's coming next - I can guarantee you you are wrong. And why I won’t say just how the night concludes, I will say you won’t want to miss it. Many of the younger citizen detectives in the audience really got into the theories and it was endearing to see the cast follow through with them. As a critic I enjoy watching audience's reactions, and in this new world of Zoom plays that is easier than ever. As twists and turns are revealed, watching the faces of excited sleuths as their suspicions come true is half the fun.

As for William Desmond Taylor’s tie in with theatre? Jerry Herman’s 1974 Broadway Musical Mack and Mabel recounts Mack Sennett and Mabel Normand’s riotous relationship; Mabel Normand just so happens to be one of the key suspects in the case. And the iconic Norma Desmond from Sunset Boulevard derived her name from Mabel’s last and Taylor’s middle, an ode to the famous murder.

As the pandemic trudges on, and work from home continues for many, Citizen Detective is one of the few Zoom meeting that will have you smiling as you join a breakout room. As the holidays descend upon us, gather the family or yourself and a nice bottle of wine and see if you can uncover the truth.

"Citizen Detective" was extended due to popular demand through February 7, 2021. Extension tickets go on sale to the general public on Friday, November 27 at 10am PST. For more information, visit:https://www.geffenplayhouse.org/shows/citizen-detective/