Comfortable In The Shadows, Not Anymore - Live Events Rally at State House 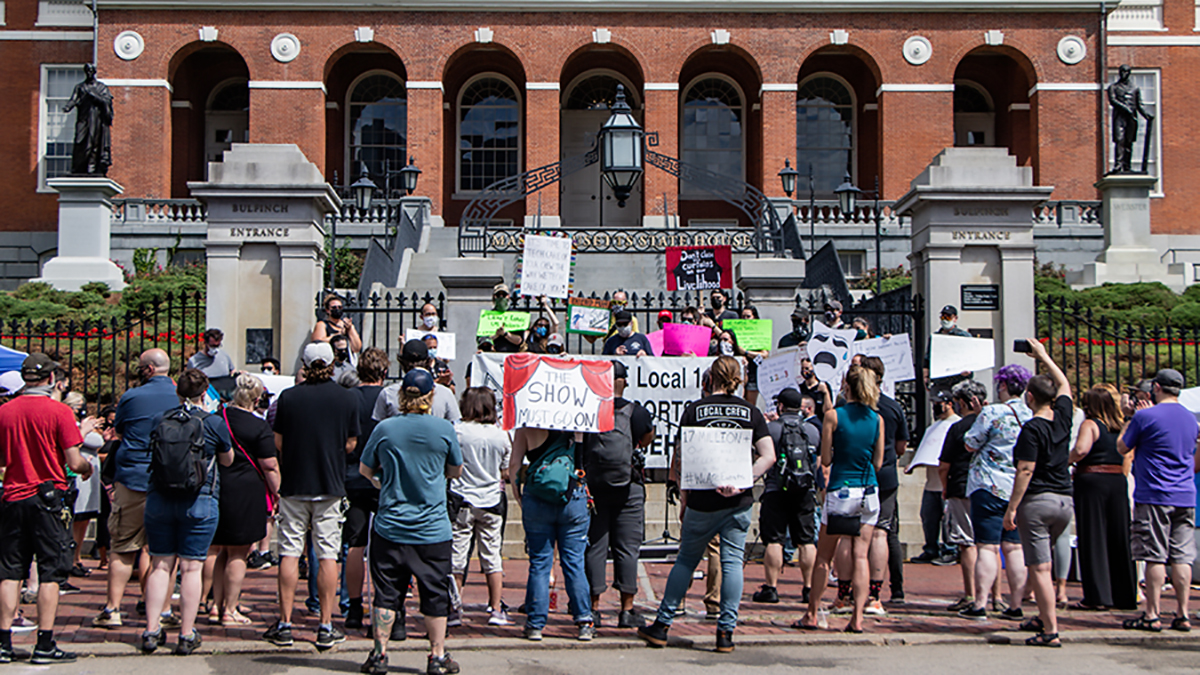 Early outside the State House this morning, here in Boston, a rally was held in support of the live events industry. From theatre to concerts, weddings to conventions, and everything in between, live events add over $1.4 trillion annually to America's economy.

Over 125 individuals came out to voice their support and urge the government to include these in their latest stimulus package, which is currently being debated on Capitol Hill.  From stage hands to photographers to drama school teachers, the crowd featured a makeup of all different career types that all are affected one way or another. Even though the sun was blaring down in 90° heat, the crowd was energetic holding signs emblazoned with slogans like: “The Show Must Go On!,” “Your Entertainment Is Our Livelihood!,” and “Don’t Close The Curtain On Us!”

Many speakers told their stories on how the pandemic has upended their lives and careers with an impassioned plea from Steven Tolman, President of AFL-CIO. Donning an “I Want To Work” shirt, theatre electrician Amanda Holt spoke on behalf of the Boston Freelance Theatre Community. “No Ivanka, I don’t want to try something new,” she exclaimed, referencing the first daughter’s new campaign to urge those out of work to explore new career paths.

Kate Hausler, stage manager of Blue Man Group at the Charles Playhouse, recounted how they were in the midst of planning their 25th Anniversary as the shut down took effect. Speaking to Ms. Hauser after the rally, she expressed, “for many of us, the job losses are continuing rather than plateauing or getting better. We need more time, we need more support, it's abundantly clear we won't be able to make theatre for months (at least), and if they expect us to find something new, they need to make sure we aren't financially destitute while we try to.”

A number of government officials, including State Director for Senator Ed Markey James Cantwell, State Senator Patrick O’Connor, and State Representative Patrick Kearney, all vocalized the need to expand on unemployment insurance and stated they are working tirelessly to fight for those in the industry.

Live events was one of the first industries to be hit by shutdowns in early March, and will likely be one of the last to see a return with many saying they want a vaccine before attending an event again. Until then, the Live Events Coalition will keep fighting for its constituents.