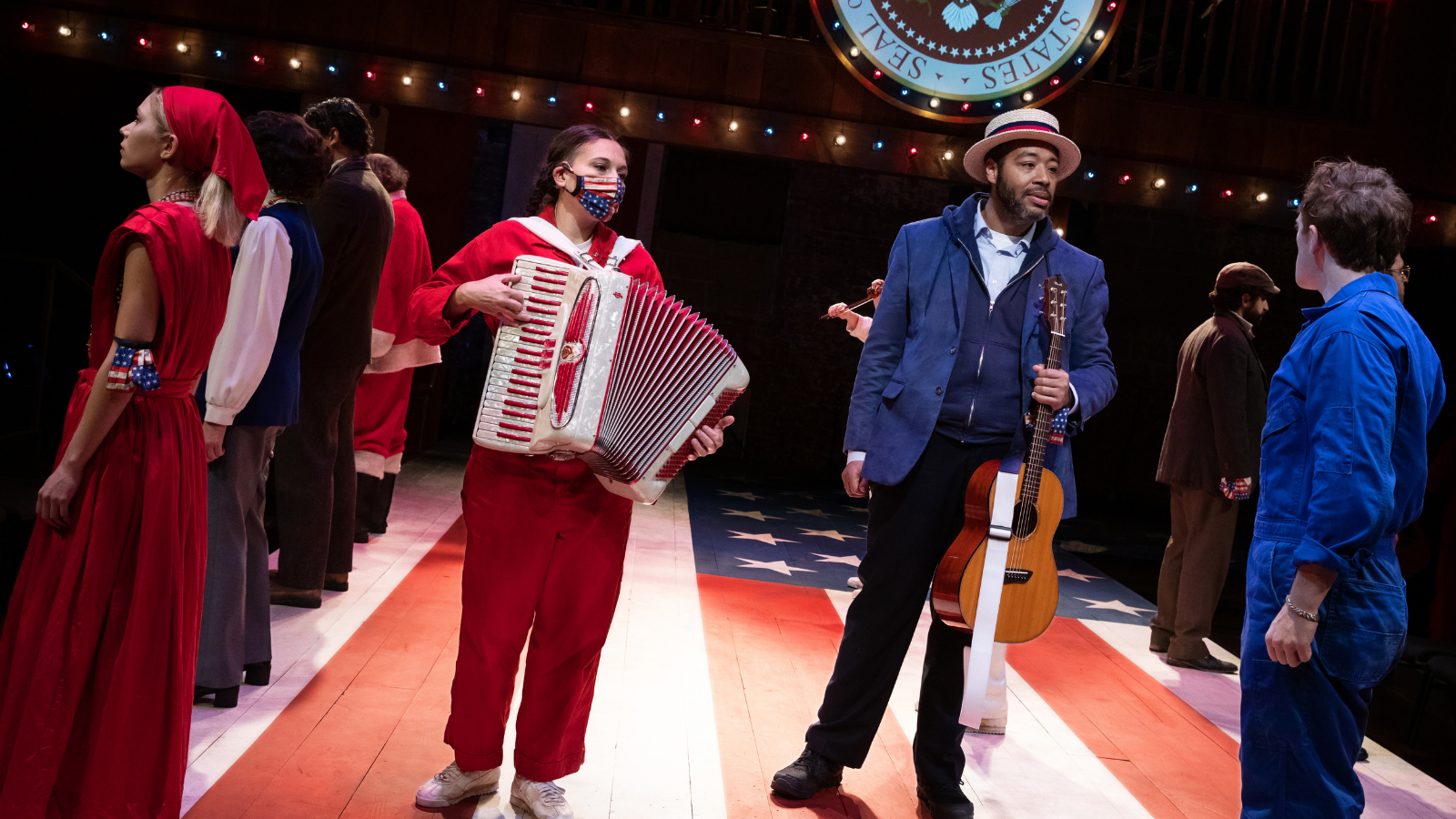 Stephen Sondheim’s Assassins is a brilliant but distancing work, making John Doyle a risky pairing with the material. For years now Doyle, who is also artistic director at Classic Stage (where Assassins plays through January 29) has specialized in stripped-down stagings of classic musicals, like recent revivals of Carmen Jones and The Color Purple. His stagings can, at their most successful, draw out the emotional core of a piece by clearing away all of the noise. But in the case of Assassins, is there an emotional core to tease out?

Assassins is a startling and searing musical, an unsentimental dissection of America’s better ideals collapsing under the weight of our sins. Sondheim’s lyrics are, of course, genius beyond words. But the conclusion Sondheim and book writer John Weidman reach on each assassin, in often inert book scenes that are consistently rescued by the next song taking hold, is much the same thing each time: they were completely insane. That is of course accurate, but limiting in terms of finding an emotional throughline.

Director Anne Kauffman was at a loss to inject some momentum into those choppy waters in her lifeless Encores Off-Center staging at New York City Center in 2017. Doyle acquits himself better here, but ultimately, he also seems mismatched. He arranges his shows like dinner tables, laid out just so. That formal neatness has worked elsewhere, but it’s an odd fit with a show about the homicidally insane.

So we are left with a revival that captures Assassins’ smarts and musical brilliance, but ultimately, still lacks a certain something. It needs a bit of mayhem. A touch of chaos. More than a hint, perhaps, of madness.

The contemporary resonances are certainly there, if not revelatory. Conspiracy theories dominate our culture more than ever, a point Doyle highlights without hitting it too strongly. “Gun Song” is more terrifying than ever, and its staging captures not only the horror of these objects we created to easily destroy one another, but the increasing mundanity of that destruction.

“Something Just Broke” still hits with ferocious power. It is the moment the show drops its remove and forcefully reckons with the devastating emotional cost of Lee Harvey Oswald’s unexplainable actions.

That idea of the unexplainable is a powerful one right now, also. The brutal truth that we may never understand what motivates so many of our countrymen’s actions—if, indeed, there is even anything there to understand. The staging of “Something Just Broke” conjures January 6th without any need for an explicit reference, but Doyle, not trusting his audience, throws a projected image of the riot up to hammer it home, killing the moment in its crib.

A good revival isn’t only measured by state of the nation resonances, and this production does have a lot else going for it. Greg Jarrett’s orchestration and musical direction is masterful. Every number sounds incredible. The crew of on-stage musicians are superb, with Rob Morrison in particular impressing both on guitar and in multiple small roles. Some of the smaller flourishes in Doyle’s staging, like The Proprietor pulling a blood red string out of a 13-folded American flag each time a life is lost, are effective in their simplicity.

Stephen Pasquale thankfully gets a second chance to play John Wilkes Booth, a role he seems born for, after a first try in that disappointing 2017 staging, and is utterly magnetic. Ethan Slater’s Ballader commands attention with a plastered-on smile which first charms and then unsettles, though his Oswald makes less of an impression. Judy Kuhn is wickedly hilarious, and she and Tavi Gevinson have fun together.

Brandon Uranowitz and Wesley Taylor are stuck with less interesting assassins who get somewhat lost in the shuffle, but both acquit themselves nicely. Adam Chanler-Berat’s “Unworthy of Your Love” doesn’t make a huge impression, but the Hinckley scenes benefit from the strange reality that the man himself is now free, tweeting and releasing music. (Has anyone offered John Hinckley Jr comps?)

The standout, though, is Will Swenson, an oft-underrated comedic performer whose maniacal take on Charles Guiteau grabs a firm hold of the show whenever he’s on stage. Swenson’s “The Ballad of Guiteau” is a jolt of energetic insanity in a production that desperately needs more of it. As Swenson flails through Guiteau’s nonsensical musical rant, we get a thrilling hint of a production that could have been, one that built insanity, pure insanity, into its very theatrical form.‍

Assassins is now in performance at Classic Stage Company in New York City through January 29, 2022. For tickets and more information, visit here.