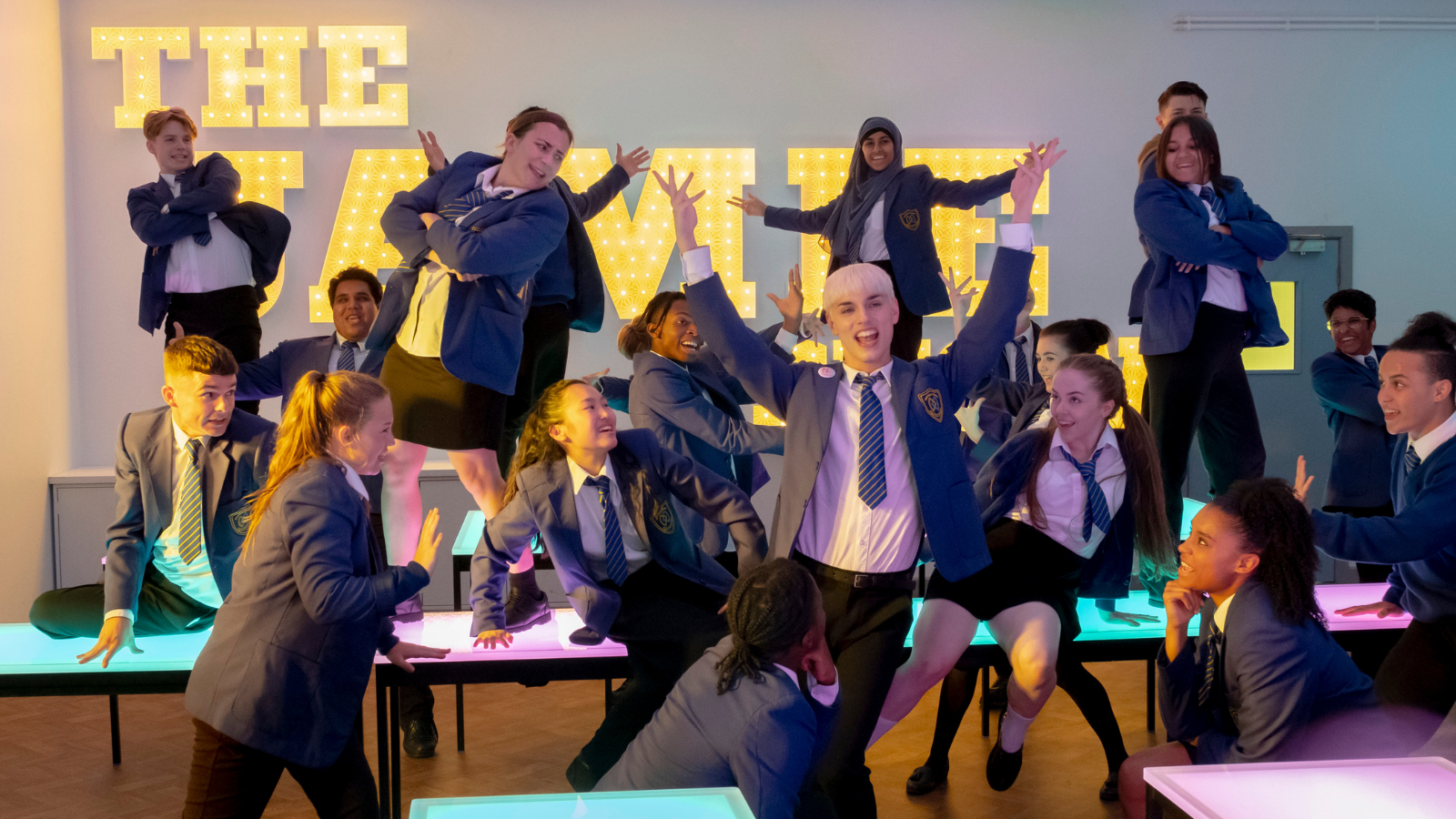 Max Harwood stars as Jamie New in the ~new~ film | Photo: John Rogers
By
Juan A. Ramirez
No items found.
on
Category:
Reviews

Let me come at this with the tough love of a nurturing drag mother.‍

Everybody’s Talking About Jamie is a musical which, the further I get away from having seen it on stage, the more I appreciate it. A charming dramatization of sixteen-year-old Jamie New’s fight to come into his own and wear a dress to prom, it was a polished, mostly silly take on the queer underdog tale, with the distinction that its lead is established as an out-gay teen. Not subjected to a tired coming out narrative, its appeal lay mostly in its earned earnestness, infectious score and all-out performances by a hungry young cast. Hunger is what drives the character of Jamie New––a real Brit whose drag beginnings were immortalized in a 2011 BBC Three documentary––and from the very first number, the electric “And You Don’t Even Know It,” you, well, know it.

An apt embodiment of the show’s accidental brilliance, the opening song captures, through fab and force, what every queer kid knows to be true: that something inside them desperately yells for something beyond the norm, even if no one can yet see this inner light. West End original John McCrea knew this. His replacement, Layton Williams, knew this. The same cannot be said about newcomer Max Harwood, who has stepped into Jamie’s heels with a face for the gods but a voice for the TikTok.

He’s a more glamorous Jamie––a vision made for serving looks in the film’s many, many dream sequences––but, however amiable, it seems that in scaling down from stage to screen, his hunger has become mere fantasy. Jamie needs to come at these high notes and choreo like Laganja Estranja to charm his way into our hearts, and Harwood mostly glides (beautifully!) through them.

A generous reading would take this to mean that queer people no longer have to give 110% to impress, but this film is not a slice-of-life study of working class England. First-time film director Jonathan Butterell, who helped develop the stage show, is more eager to escape into glossy fantasy numbers than lean into the sweat and tears that highlights the yearning behind these songs. Musical numbers go from zero to one-hundred quickly, summoning up dancers and flashes of light instead of telling a story through the poignant schism between Jamie’s glittery visions and his bleak surroundings.

Many blame Baz Luhrmann’s Moulin Rouge! (2001), with its quick cuts and hyperkinetic dancing, for “ruining” the movie musical, but Luhrmann showed his mastery over combining the forms in knowing that editing—the backbone of the cinematic language—is what could be chopped and screwed to make a modern musical work on film. The showmanship always remained brassy, pointed, and focused on the performers.

“Work of Art,” a bass-heavy house song in which Jamie reaches the confidence to invite his classmates to his first drag show, has stunning references to the voguing videos of the ‘90s, but misses what made the stage version so affecting. There, it is an ode of queer reclamation, as the young man turns his bullies’ mocking Snapchats into a runway show he controls. Here, the black-and-white cinematography and angular choreography are a treat, but lack the deep truths that charge the original.

But enough motherly patronizing, because Everybody’s Talking About Jamie is ultimately a pleasure to experience and features strong supporting turns from its cast.

As Jamie’s drag mentor Hugo, ally-of-the-century Richard E. Grant nails a tender number about his experience of queer history, with archival footage of Freddie and Diana shooting straight through the heart. Lauren Patel, as Jamie’s best friend Pritti, is convincingly puzzled by her bestie’s sudden love of eyeliner. And Sarah Lancashire is alternatively heartbreaking and -warming as Jamie’s mother, even if her tearjerker ballad, “He’s My Boy,” does all it can to keep her offscreen. Cameos from McCrea and Bianca Del Rio are fun tributes to the musical’s stage roots.

Maybe it was Amazon Studio’s annoying decision to keep this film out of theatres and in the living room that lessened its impact on me, though I can say with confidence that I will be rewatching it for its dazzling numbers, if not for its dramatic value. Sometimes girls do, after all, just want to have fun.