FAIRYCAKES Not Worth Believing ― Review 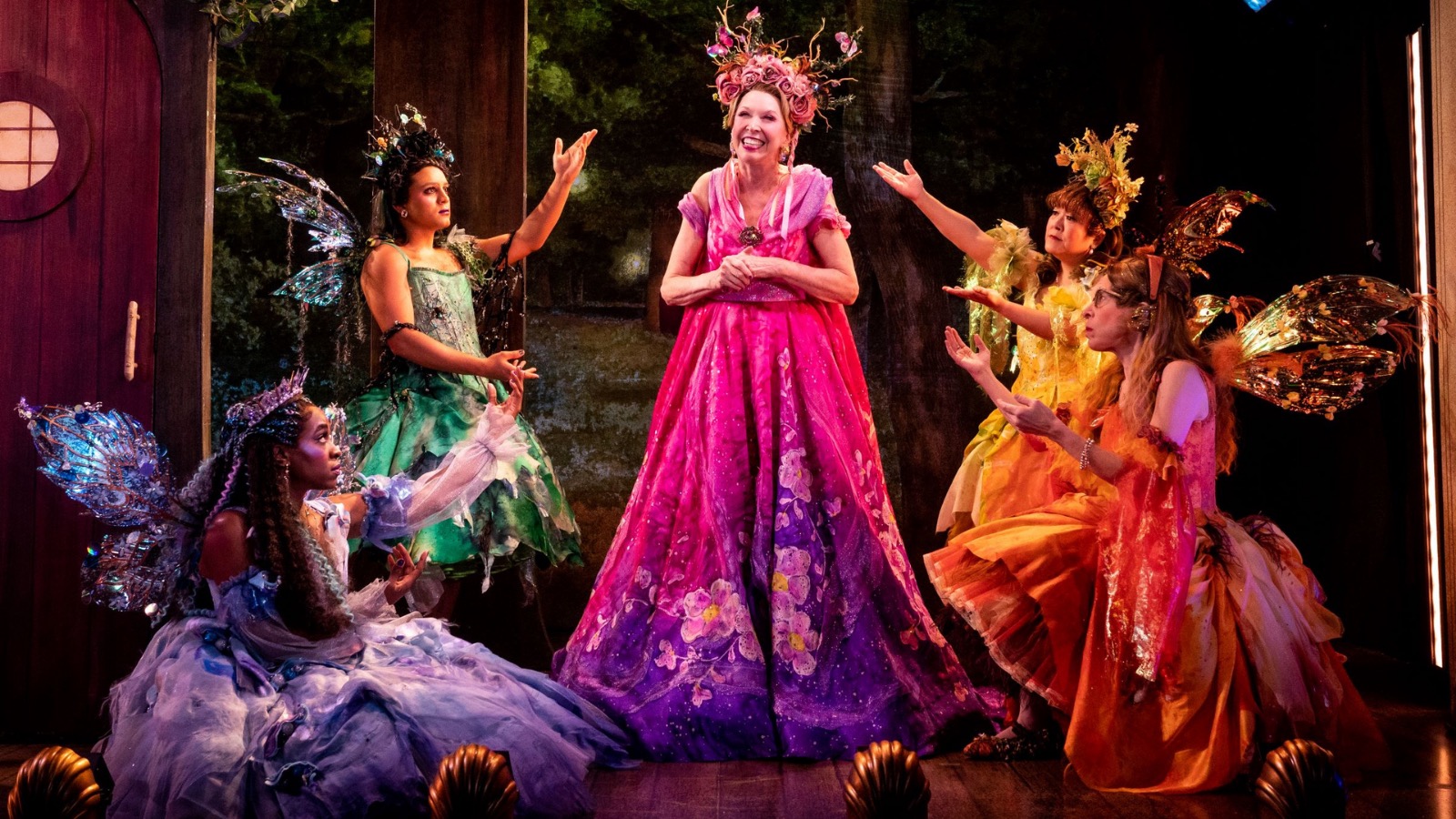 There is a whopping cast of twelve in Fairycakes, Douglas Carter Beane’s new sendup of A Midsummer Night’s Dream and other assorted fairy tales, which just opened at the Greenwich House Theater. Its stage is of a large enough size, but it buckles under the weight of Beane’s bloated design: twelve performers, some playing multiple roles, struggling to find a spare minute with which to make an impression, and tools to help them.

Consider it the Gay Village’s take on Marvel’s Avengers movies, in which approximately seven hundred characters wrestle for screentime and plotlines, failing at both. Beane’s own overcrowded direction, which often just scatters the characters about the stage with little care, leaves the assembled fairies and mortals to fend off the tremendous dud of a book all by themselves. The result is kind of a bloodbath, told almost entirely in tiresome verse.

Beane injects the bard’s breezy tale of swinging blind romance in the mystical woods with fairy tale icons like Cinderella and Pinocchio, and there is not much more thought given to this other than the passing coincidence that these tales include magical beings. And so Geppetto (Mo Rocca, for some reason) struggles with raising Pinocchio (Sabatino Cruz) at the same time Puck (the winsome Chris Myers) flirts with the fairy Peaseblossum (Kristolyn Lloyd, charming).

Peaseblossum and her sisters (Jackie Hoffman, Z Infante, Ann Harada) are distraught when they discover that the recent separation of parents (Julie Halston and Arnie Burton as Titania and Oberon, respectively) will result in their death. Meanwhile, Cinderella and Aurora (both played by Kuhoo Verma) shoot their shot with the Prince (Jason Tam), and the mythical Changeling (Jamen Nanthakumar) hangs around looking for something to do.

It’s a lot of ground to cover, backstories to (somewhat) fill, and introductions to be made. If reading it sounds like a chore, then you get a pretty good idea of what the first act is like: all exposition with no new material mined out of characters whose stories we know inside and out.

Beane’s verse becomes oppressive almost immediately, resigning itself to cutesy, sophomoric rhymes at the cost of wit, humor, and playfulness. As if mirroring the show’s punitive hexes, the actors are cursed into playing tired Shakespeare 101 jokes, sapping them of any chance to find anything new to say about their characters, or at least a new way to say it. The overcrowding of the stage and plot only heighten the book’s unbearable slightness.

Unsurprisingly, Jackie Hoffman and Julie Halston float comfortably amid the exhausted-queen dialogue only a gay man of a certain age could write. Two sides of the same coin—the regal Halston, who also plays Queen Elizabeth, and Hoffman, with her trademark frumpy humor —they wring as many laughs as possible from a cloth that has long dried up.

As Pinocchio (and one of Cinderella’s stepsisters), Cruz charmingly evades child actor precociousness by leaning all the way in; a knowingly kitschy tap-dancing puppet with a perma-grinned earnestness. In a sense, his presence and performance are the best suited to this material which, more often than not, feels like it should be performed by a cast of under-21s.

Gregory Gale’s costumes are serviceable, if a bit more Party City than Neverland—as are Shoko Kambara and Adam Crinson’s scenic design. Original music by Lewis Finn winks at the idea of this being a musical—an unfulfilled promise that might have actually gone somewhere—but, like Elenore Scott’s choreography, and most of this draggy production, it remains flightless.