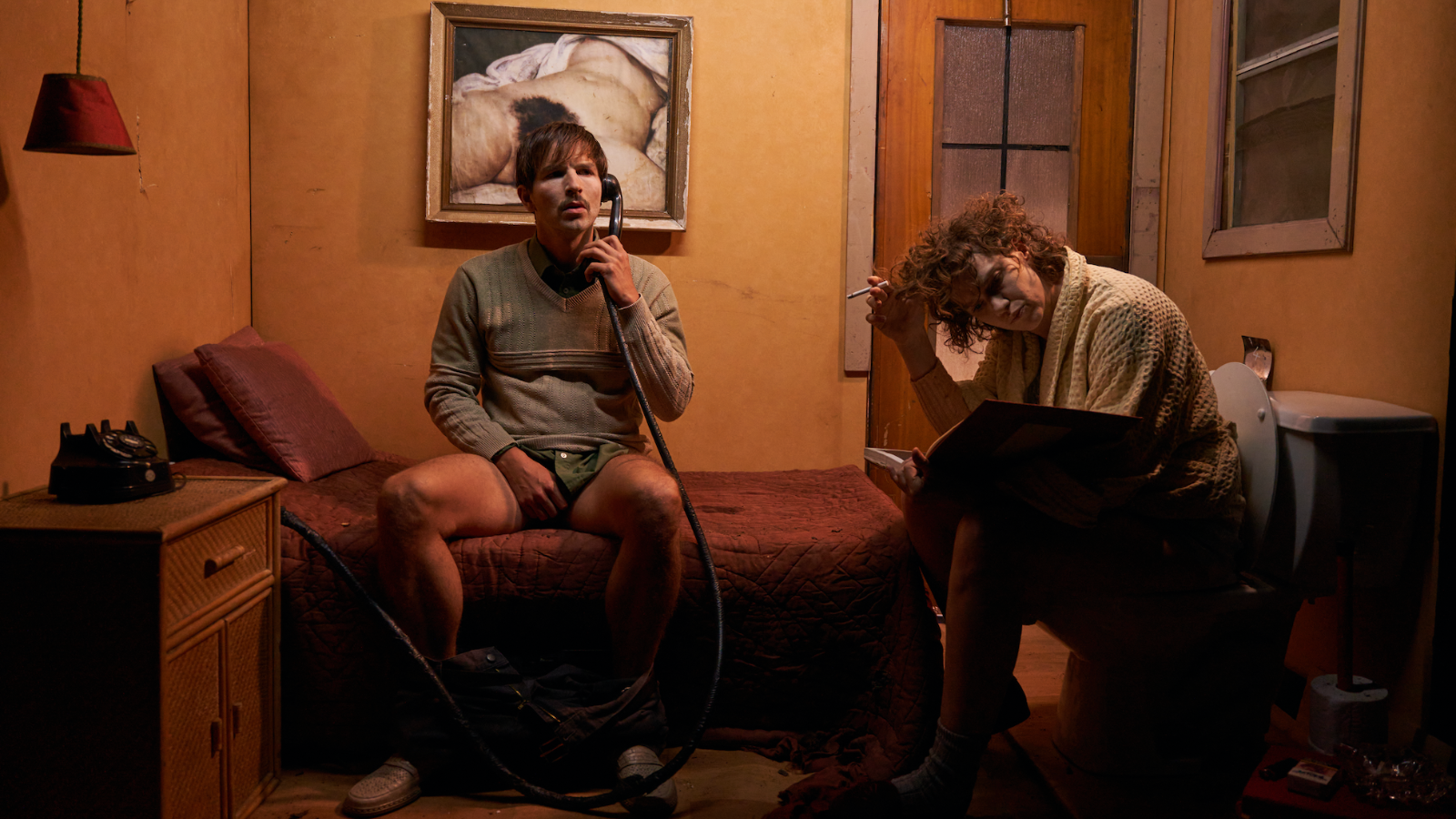 Open the flood gates! BAM’s Next Wave Festival has returned after a two year hiatus of in-person performances. The 2022 festival launches with the American premiere of FC Bergman’s 300 el x 50 el x 30 el. The Belgian troupe’s massive, multimedia theatrical installation is a perfect, haunting start to the festival.

Named after the dimensions of Noah’s Ark, 300 el x 50 el x 30 el transforms BAM’s Harvey Theater into a rural village including six shacks, a dense forest, and a small pond. While finding your seat in a dense haze, you can smell the deep, earthy scent of moss and cigarette smoke. Following FC Bergman’s advice to let the performance flow over me, I was thrilled to be in the packed theatre not knowing exactly what was to come.

While the expansive installation is impressive in its own right, the real magic is happening behind closed shack doors. Using live camera feeds, we are granted access to the private drama of the installation. Operated by three crew members, the camera rotates around a track revealing what is happening in each home.

In one unit, a family attempts to satiate its hungry matriarch with anything they can (is she eating a chair?). In another, a man masturbates while his lover is trying to pass something on the toilet (is that a conch shell?). Another shows a man blowing up a scaled replica of the village with firecrackers (does he represent God?). The surreal images are at times hilarious, gruesome, and charming.

The storytelling and tension of the piece, which has no dialogue, relies upon the contrast between the chaos of the shacks’ interiors and controlled, robotic movement of the tracked camera. Each time the camera returns back to a home, we see how the dynamics of the unit have shifted. It’s like coming back to your dollhouse and realizing, against the laws of existence, your toys have moved themselves into a much more disturbing situation than when you left them. As the performance takes a darker turn, the camera movements become more jagged and rapid. It was fascinating trying to split my attention from the filmed interiors and drama onstage, knowing I could never catch every detail.

There are a few shocking moments when the cast of 15 exit their shacks and unite on stage. They stand still watching a dead sheep being exhumed from the pond with a crane. As the suspended carcass drips muddy water, some audience members gasp while others laugh. The divisive response makes sense, as FC Bergman has said the piece does not have a code to crack. Whatever interpretation you might have, the images are impactful—you literally have to see it to believe it.

BAM’s Next Wave Festival is a showcase of performance NYC rarely, if ever, gets to see on a large scale. It also is a way to bring a broader artistic community together in a shared space. Ahead of the performance, BAM recruited masses of local extras to flood the stage during the climax of the piece. When the crowd appeared, I got emotional thinking about the return of the thrilling, experimental festival. If 300 el x 50 el x 30 el is any indication of what is to come with the 2022 festival, consider BAM my next home for the rest of the year.