HAMLET Smartly Traps the Audience in Its Madness – Review 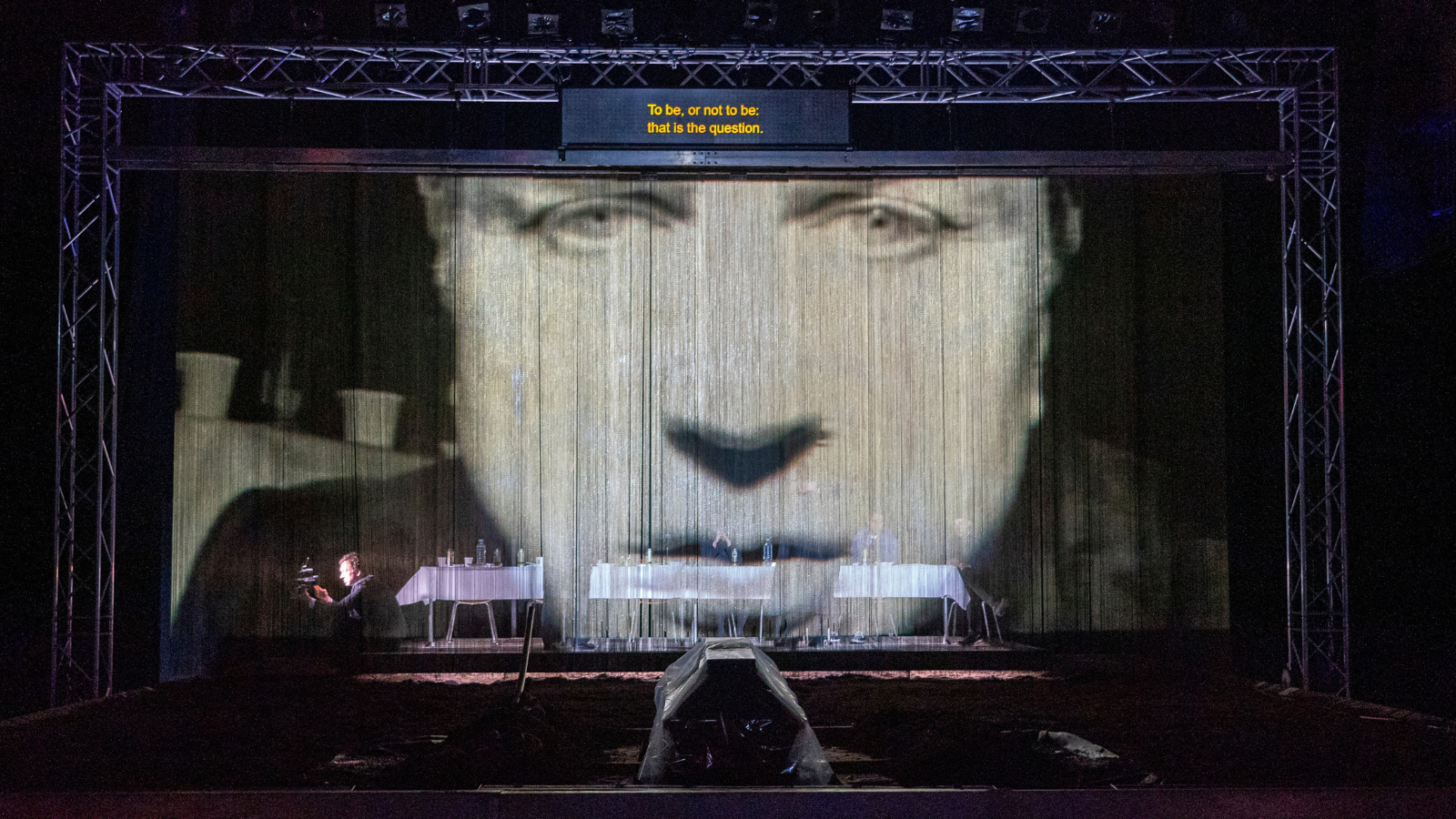 “What is a Mousetrap?” Hamlet asks the audience. Moments of silence pass.  Someone in the second row offers, “It’s when you catch someone.” Hamlet, deadpan and standing partially nude in fishnets and a wig, turns to his murderous uncle Claudius and repeats “It’s when you catch someone.” Hamlet turns back to us, and we laugh knowingly. All the world’s a stage and all that jazz, right?

Thomas Ostermeier’s Hamlet has made its highly anticipated New York debut. Originally created in 2008 for Schaubühne Berlin, the bombastic piece is now part of BAM's Next Wave Festival. It’s a fantastic, high-octane mess. Caring little about Shakespeare’s text (a heavily trimmed German translation by Marius von Mayenburg) Ostermeier is more concerned about pushing the prince of Denmark (Lars Eidinger, exceptional) to the max. By the time Hamlet involves the audience in his bloody drag performance of The Mousetrap, we had already been trapped for a while. There was nothing we could do but buckle our seatbelts as the car crash of an experience barrelled to its bloody climax.

The performance begins with Eidinger filming himself reciting the Dane’s “to be, or not to be” speech (yes, a very early delivery). The Blair Witch-style closeup of his face (video design by Sébastien Dupouey) is projected above a huge lot of dirt, prepared for the burial of his suspiciously dead father, and a table, prepared for the too-quick-for-comfort wedding of his mother and uncle.

The burial is a mess, with the rain-soaked gravedigger falling under the coffin. The wedding is equally uncomfortable, with Claudius and Gertrude making out, Laeretes shooting a machine gun, and Gertrude writhing as she sings a love song. While the cast of five, all doubling except Eidinger, could easily take their performances to caricature-level, they remain grounded and unflinching. Hamlet captures all of this through his lens, revealing his opinion of the unnerving, disgusting circumstances. All of this sets the scene for Ostermeier’s main focus: performing madness.

After a visit from his father’s ghost, Hamlet tells Horatio he will “put an antic disposition on,” masking his motives of avenging his father’s death. This is the first production of Hamlet I have seen where I have felt so inside Hamlet’s game of madness. Just short of winking and nodding at us, Eidinger makes sure we know everything he is doing is pretend…or is it? We watch Eidinger hurl himself into the dirt, eating fistfulls of mud. He sprays Rosencrantz and Guildenstern with various liquids while performing a hip hop standard atop a banquet table. His performance is shocking and exhilarating. I found myself even rooting for Hamlet to fool everyone.

Then, things take a turn. A darkness begins to appear in Eidinger’s unpredictable Hamlet. He throws both Ophelia and his mother (both Jenny König) around stage, attempting to bury both of them in dirt. He wraps Claudius in plastic, pours blood on him, and kicks him to the ground. While these images do correspond with the dramatic turns of Shakespeare’s work, it was captivating to watch performative madness turn real. By the time Eidinger came into the audience before his fatal duel, I was terrified. And then Hamlet ends the way it always does. A big, bloody body count and Horatio living on to tell Hamlet’s story.

I left Hamlet thinking about Fat Ham, the Pulitzer Prize adaptation of Hamlet at the Public earlier this year. Fat Ham also experiments with Shakespeare’s text, denying the tragic ending and celebrating life. Ostermeier’s Hamlet, relishing in the brutal ending, is also a celebration of life. It celebrates the intimate, theatrical connection an audience has with a performance and its performers. We are all part of the trap.

‍Hamlet is currently playing through November 5 as part of BAM’s Next Wave Festival. Performances are held at BAM Strong inside the Harvey Theatre. For more information and tickets, click here.

Nolan Boggess is a director and writer living in Brooklyn. Originally from Iowa, Nolan’s theatre obsession began with the VHS of Cats and one too many productions of The Music Man. A graduate of Grinnell College, Nolan currently works as a COVID Safety Manager on Broadway. He is so thrilled to be apart of the Theatrely team - say hi to him on social media!