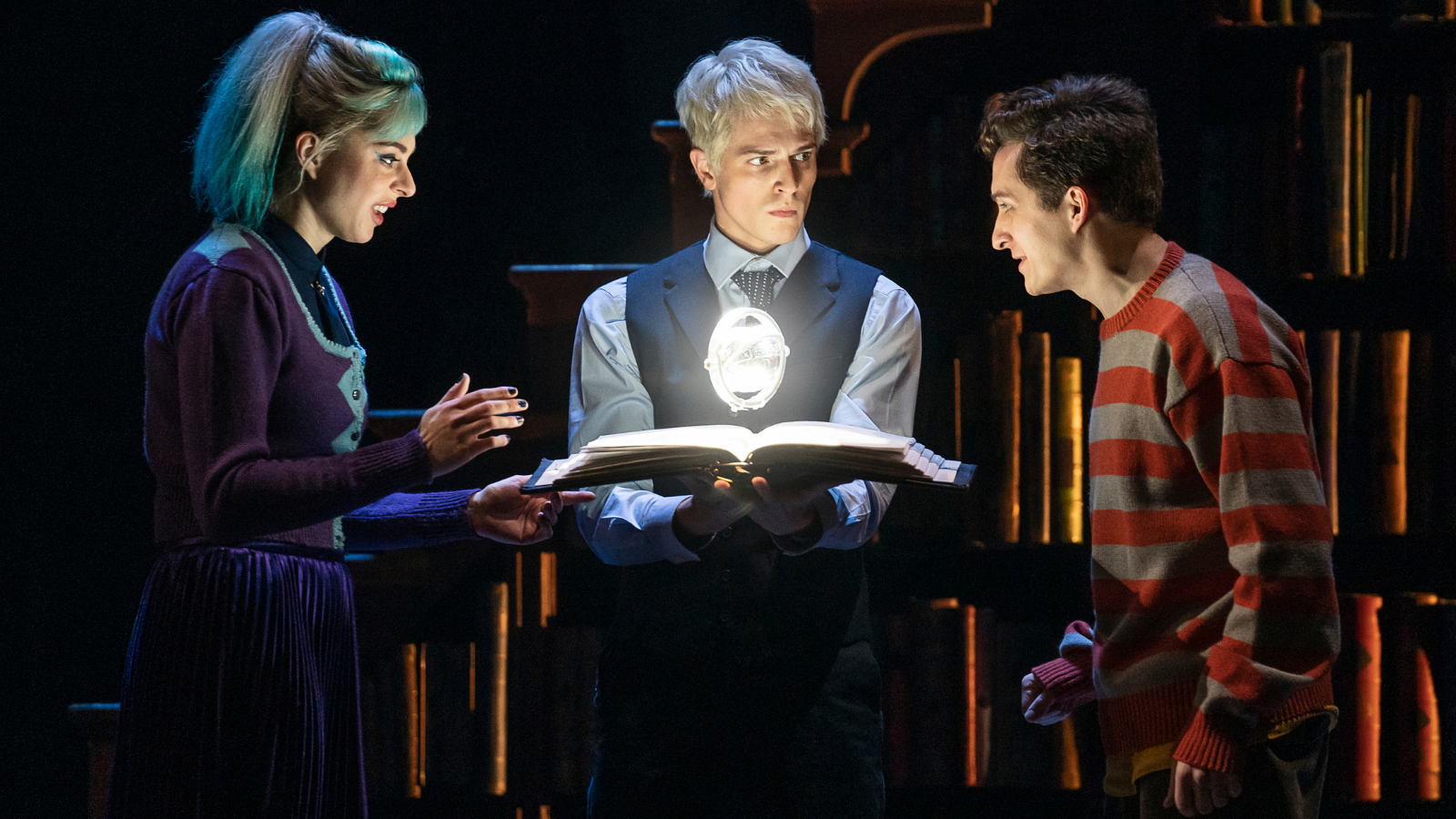 First things first: it is indeed much gayer, if still not as gay as it could be.

Since its West End debut in 2016, Harry Potter and the Cursed Child has attracted intense fan interest around its central relationship. The close bond between Harry Potter’s son Albus and Draco Malfoy’s son Scorpius forms the emotional core of Jack Thorne’s play, which follows the pair’s doomed effort to “set history right” by stealing a time turner and saving Cedric Diggory’s life nineteen years in the past. (It goes wrong, of course, and complications ensue.)

Thorne’s original text, co-conceived with director John Tiffany and J.K. Rowling (more on her later) does not demand Albus and Scorpius’ bond be played as a burgeoning romance. But Tiffany and original co-stars Sam Clemmett and Anthony Boyle certainly leaned into that reading in the play’s first iteration, playing the duo’s journey as a love story even when the text sometimes insisted otherwise. Choreographer Steven Hoggett even crafted a mournful, romantic “Staircase Ballet” for a scene where the two are forced apart.

So early reports that Thorne’s new single evening, 3-and-a-half-hour version of Cursed Child (slashed down from two parts) had leaned further into queerness without actually naming it suggested a creative cop-out. That idea felt dispriting in part because Rowling is now a crusading transphobe, who uses her platform primarily for hate. An embrace of everyday queer love by Thorne could go some small way to holding this play apart from Rowling’s bigotry—but did they have the guts? A new line in the show’s final scene does sound, out of context, like a carefully managed, corporate tested compromise: Albus informs his father that Scorpius “might always be the most important person in life.”

But as always, context is key. That line and all of Thorne’s subtle shifts to this central relationship do in fact work. Cursed Child now eagerly places Albus and Scorpius’ love story at its center, without shyness or shame. But at the same time, leaving some things unspoken does feel truthful. It seems right that Albus and Scorpius would, by this story’s end, have reached an understanding of how important they are to one another without yet fully comprehending what that means.

That shift in the play’s central axis does have knock-on effects—some of them tricky. In its two-part version, Cursed Child was really about two relationships: Albus and Scorpius, and Albus and his father Harry. The latter dynamic now feels less fleshed-out. Steve Haggard’s Harry thankfully remains a tense prick, which is such a great choice—the guy went through a lot!—and his ferocious early argument with Albus still hits hard. But father and son’s attempts to rebuild get a bit lost in this version’s frantic pace, and the play’s final scene loses some impact as a result.

There are other losses. While Ron was always something of a hanger-on in this story (which, like, whatever), Hermione now unfortunately joins him. A formerly dignified presence who brought a needed level-headedness to the proceedings, she now mostly hovers on the outside of the action. Though perhaps we’d underestimated just how much presence Noma Dumezweni was bringing to an underwritten role - the (very talented) Jenny Jules feels, by contrast, easily lost in the madness around her.

Cursed Child was always a male-focused story, but with these new cuts, the play’s women are now broadly afterthoughts. Ginny Weasley barely registers outside of a couple good lines, though Diane Davis brings warmth and wit. And Delphi Diggory’s arc has so little room to breathe that audiences are far less likely to be surprised by her ultimate place in the story.

The play’s now-furious pace means one other casualty: atmosphere. Thorne’s sprawling tale had allowed Tiffany and set designer Christine Jones to build an expansive look at the Wizarding World, one far richer and more lived-in than anything the film series accomplished. Tiffany’s staging remains, of course , astonishing—from Polyjuice transformations to Dementors to apparitions, the magical work of the technical team is mind blowing and simply never gets old. But with the loss of multiple flashbacks, as well as time spent in alternate timelines, that world now feels a bit less expansive.

Other elements are neither better nor worse, but just different. As Harry, Hermione and Ron, Haggard, Jules and David Abeles read significantly younger than the play’s original cast. The classic trio play not as struggling adults but overgrown children, still scared and overwhelmed in a confusing world. When Headmistress McGonagall dresses down parents and children alike, an existing line now lands much harder: “You are all so young.”

(Thorne also corrects writing errors in the previous version which rendered McGonagall a useless, doddering figure—her commanding self has thankfully been restored.)

For all its unwieldiness—and the play is unwieldy, now more than ever—Cursed Child works because it is grounded in themes of loss, trauma and love. In the two-parter those themes tied together surprisingly in the final scene, where Harry and Albus looking to a hopeful future while standing at Cedric’s grave. Only then did you realize the trick Thorne had pulled, of telling such a grounded, deeply human story amidst all this big-budget insanity.

Now, we hit those themes earlier and harder, threading a slightly repetitive “power of love” message through the proceedings with a heavier hand. It’s inelegant for sure. But the play still works because it holds onto its relationships. Cursed Child is, like Rowling’s original novels, ultimately about companionship as the most essential, powerful defense amidst a lonely world, and Thorne and co. have ensured that quiet, intimate moments which make the play’s emotional core still get their due.

So we still have Draco Malfoy (Aaron Bartz, tremendous) softly explaining to Harry the cost of spending your teenage years feeling deeply alone. (As in the movies, Draco is quietly the show’s deepest and most rewarding character.) We still get Dumbledore (in painting form) mourning the pain he was forced to put Harry through and the support he failed to provide, adding as a tragic aside: “And I never had a son.” And we still get to see Severus Snape (Stephen Spinella, feasting) cast his patronus—a doe—to save the life of another, then mournfully bow to this magical representation of his inner goodness.

And we still have that final scene, at Cedric’s grave, where the constantly warring Albus and Harry realize just how alike one another they truly are. The scene isn’t all that it was, but it remains deeply moving, tiny and monumental all at once. Cursed Child’s most impressive accomplishment, ultimately, is making a multi-millionaire dollar corporate construction somehow feel like a small gift, a magical little thing speaking just to you.

Harry Potter and the Cursed Child is now in performance at the Lyric Theatre on West 42nd Street in New York City as well as other productions around the world. For tickets and more information, visit here.

Joey Sims has written at The Brooklyn Rail, TheaterMania, Culturebot, Exeunt NYC, New York Theatre Guide, No Proscenium, BNet, Broadway’s Best Shows, and Extended Play. He was also Social Media Editor at Exeunt for two years. Joey is an alumnus of the Eugene O’Neill Theater Center’s National Critics Institute, and a script reader for The O’Neill and New Dramatists. Prior to the shutdown, he worked as an Operations Manager at TodayTix.