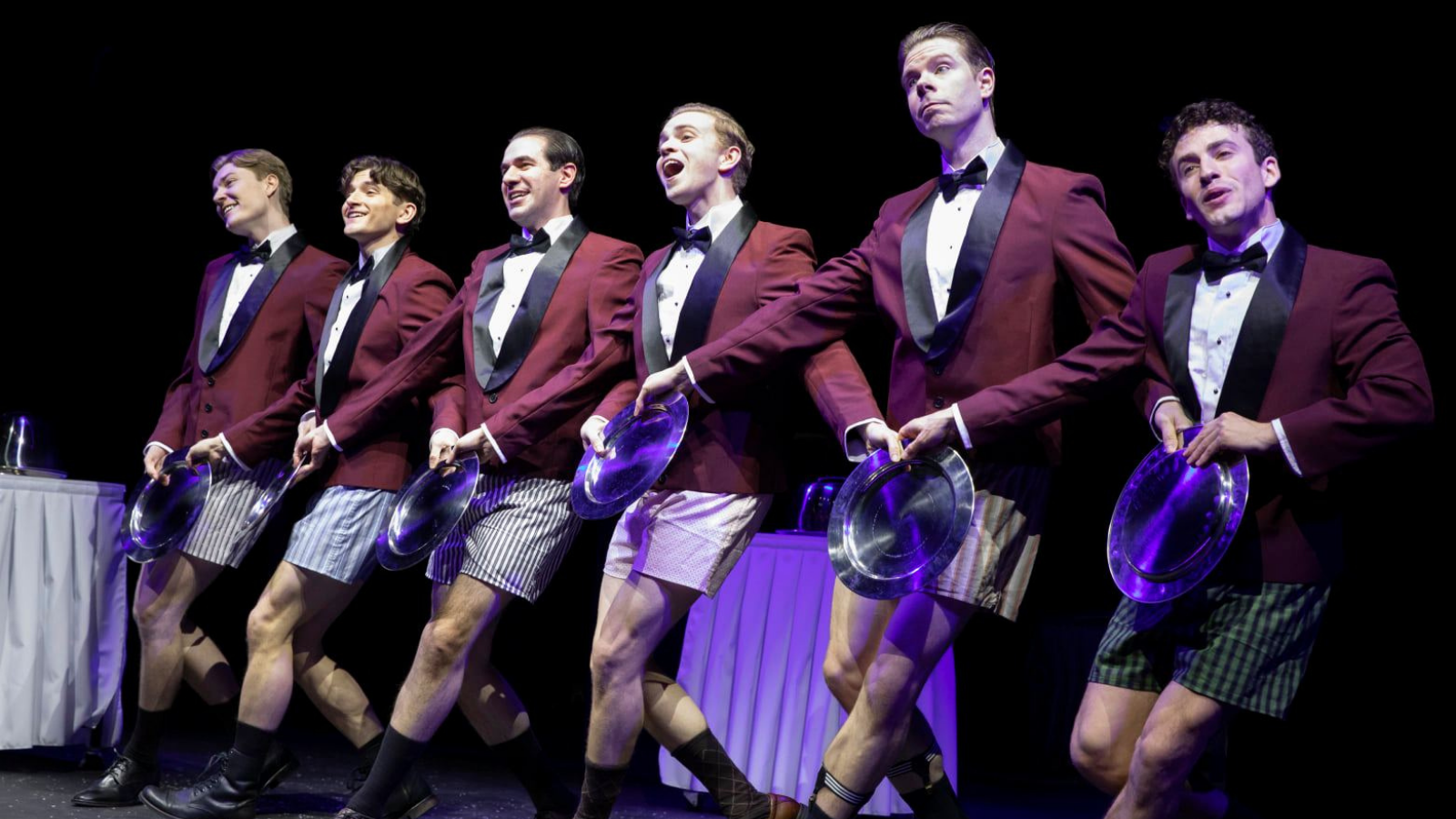 The company of Harmony: A New Musical | Photo: Julieta Cervantes

No matter how hard times get, there’s always something to sing about, and sometimes you luck out and find a few others to join your chorus. Harmony, a mostly great new musical with music by Barry Manilow and book by longtime collaborator Bruce Sussman, touches on this hopeful truth at its best. In telling the story of the Comedian Harmonists, a ragtag group of six men who found tremendous (if, now, forgotten) success in early 1930s Germany through tightly harmonized,  gag-filled numbers, they make their best case when stepping aside to let their stars shine.

There’s ringleader Harry (Zal Owen), eager-to-please Bobby (a very funny Sean Bell), daddy’s boy Erich (Eric Peters), bad-boy Chopin (Blake Roman), the underwritten Lesh (Steven Telsey), and young Rabbi (Danny Kornfeld), so called because he’s left his religious life behind because “it would be nice to sing in a major key for once.”

Struggling through lack of opportunity, they strike gold when costumes stolen before a gig lead to an improvised, naughty take on one of their songs, which earns them the laughs and upward mobility they crave. It’s all very Funny Girl, though the time and place—as well as Beowulf Boritt’s mirrored set—take the characters right into Cabaret: as their star rises via several successful international gigs, a certain political party sees them fit to become friendly “cultural ambassadors” to the world, even when some of its members become unwelcome in their own country.

Manilow’s music is fun and, with 21 numbers, plentiful, if not particularly memorable. He has the most fun with the couple pastiche songs he writes for Harmonists, during which Warren Carlyle’s enjoyable choreography becomes its most rousing. In “Come to the Fatherland,” a satirical paean to Germany’s fall from grace, the lederhosen-clad group dance as marionettes, tied to dangling strings. The visual gag is already effective enough, but the men’s sharp moves and sparkling, pitch-perfect deliveries make it the show’s most memorable number.

Whenever left to create his own sounds, though, Manilow’s score quickly plateaus into mundanity. A should-be-riotous prole hymn, led by Chopin’s girlfriend (a strong Jessie Davidson), has the same vibe as young Rabbi’s profession of eternal love for  Mary (the angel-faced, angel-voiced, and underused Sierra Boggess) in the face of Nazism—and neither would feel out of place on an easy listening station. These songs pale further in comparison when contrasted with the Harmonists’ vocal chemistry, a winning formula the book should be displaying front and center.

Chip Zien goes for production MVP fast and early, donning several wigs and outfits as he plays a variety of roles (including Marlene Dietrich, who Sussman seems to hate). His energy is laudable, and he is a capable tour guide through the years-spanning narrative, but I’m not convinced his character, added some time during the musical’s long road to New York, is entirely necessary.

He’s also tasked with carrying the bulk of the book’s rapidly increasing earnestness about the time’s political situation, which comes to feel a bit like low-hanging fruit. The Nazis rise to power signals the book’s descent into the simplicity of a grade school history lesson territory—literal Albert Einstein (Zien, of course) at one point shows up to tell the boys that, yes, Hitler is a serious threat, and the older Rabbi becomes abruptly plagued by a survivor’s guilt that opens a too-real void of despair the show does not adequately set up, or is equipped to deal with.

Dips into melodrama aside, the Comedian Harmonists’ story is one that, as one of them points out from the jump, is barely known today. Manilow and Sussman’s work to keep their legacies alive is admirable, and what their musical lacks in out-of-the-boxness, it more than makes up through the classic art of telling an unsung story well. In this case, it’s sung gorgeously, and six times over.

‍Harmony is in performance through May 8, 2022 at the National Yiddish Theatre Folksbiene at Battery Place in New York City. For tickets and more information, visit here.