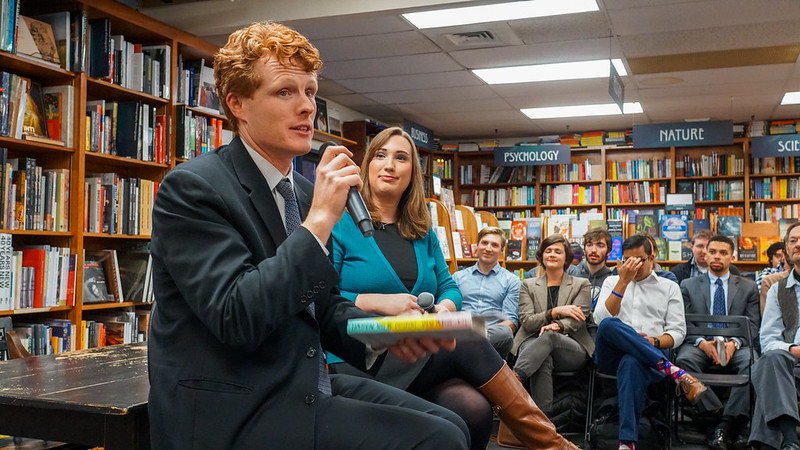 It was last Thursday afternoon that my phone started buzzing with text messages from friends and colleagues about a Playbill article announcing an upcoming benefit: Broadway Sings for Joe Kennedy III. The article stated that many Broadway favorites including Sara Bareilles, Kelli O’Hara, Andrew Barth Feldman, composing team Benj Pasek and Justin Paul, and more would participate in a pre-taped virtual concert. I was unaware that so many Broadway veterans kept abreast of the Massachusetts Senatorial race but was intrigued to learn more.

Joe Kennedy III, grandson of Robert F. Kennedy, is running against one-term incumbent Ed Markey for the seat. Senator Markey won a 2013 special-election when John Kerry stepped down to become the US Secretary of State under President Obama.

Mere hours after Playbill had tweeted out the article, many Twitter users started calling out the participants for their frustration in supporting Mr. Kennedy’s campaign. Hundreds of tweets started pouring in tagging the stars and asking them not to participate.

One Twitter user who asked to remain anonymous told me, “Joe Kennedy is running against the single most progressive member of the democratic caucus. It’s upsetting that leaders of such a diverse, progressive industry are betraying those 'progressive ideals' they are vocal about online.”

Playbill has since taken down the original tweet due to the backlash and updated the article to reflect: The previously announced Kelli O'Hara, Solea Pfeiffer, Andrew Barth Feldman, and Benj Pasek and Justin Paul will no longer take part.

A representative for Andrew Barth Feldman told me, “Andrew has decided he will no longer be participating in this fundraiser. He is so grateful and proud to be part of this community that listens to each other, grows together, and for the resources he was sent recently.”

Other stars have taken to Twitter to voice their opinions as well.

George Salazar, of Be More Chill fame, took to Twitter with the following sentiment.

As of the time of writing this article, the portal to purchase tickets has been taken down. On Sunday, July 19, Playbill reported that the benefit will be "postponed until further notice." A spokesperson for Kennedy for MA has responded with:

"We are heartbroken by the cyber-bullying so many of our event participants were subjected to. The toxic nature of political Twitter is nothing new, but the level of vitriol Senator Markey and his supporters have unleashed during this campaign is unprecedented. This is a huge part of the reason Joe decided to challenge a 47-year incumbent in the first place. Because he understands how sick and tired people are of this kind of politics. At the end of the day, this is a race between two progressive Democrats from Massachusetts. We should be able to engage in a spirited debate  about who is the best leader for this moment without tearing down the other team."

No matter who you support in the race, it is important to vote and let your voice be heard. The Massachusetts Primary Election day is September 1, 2020.

[EDIT]: This article was updated at 1:15PM on Sunday, July 19, with a statement from Kennedy for MA.