In Mosaic Theater’s BIRDS OF NORTH AMERICA, A Father and Daughter Yearn to Connect — Review 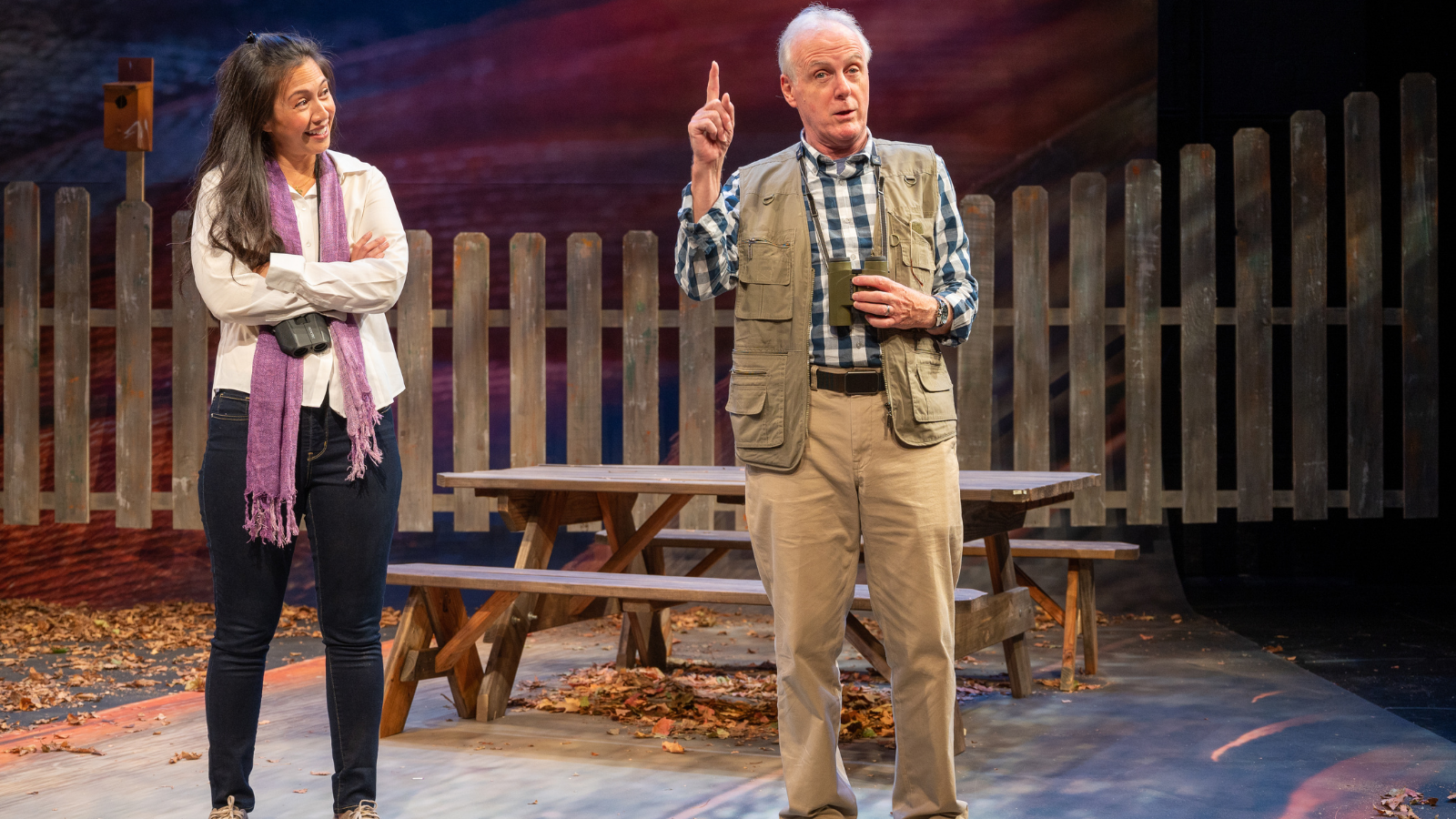 I don’t spend a lot of one-on-one time with my father outside of our skiing trips. While our life experiences, identities, and political beliefs are vastly different, there’s something about the tradition of being outdoors together—and the unavoidable intimacy of sitting on a chairlift—that cracks open conversation between us. Maybe skiing is just an excuse to be around each other, even as time forces the lives of a father and his child to inevitably drift apart.

Bird-watching is the excuse for unexpected closeness between the two characters of Birds of North America, the first play reopening Washington, D.C.’s Mosaic Theater Company. In Anna Oeuyang Moench’s contained but ambitious two-hander, John (David Bryan Jackson) and his daughter Caitlyn (Regina Aquino) are attempting to catch sight of new birds from their Baltimore County backyard. The setting is sensitively rendered in Alexa Ross’s abstract set and David Lamont Wilson’s sound design. Together, they create an autumn mood that captures the muted crispness of an overcast day, along with the occasional brilliance of light seen in films like All That Heaven Allows.

As the play goes on, the audience realizes that each scene between the father-daughter duo is happening a year apart from each other. The show, eventually spanning a decade’s time for the characters, becomes an astute study in how time deepens both familial wounds and relationships.

The most evident change over this decade is to the climate: increased temperatures, deforestation, and even house cats have dwindled bird populations and fundamentally changed migration patterns. John, played by Jackson with an appealingly wry humor but also a frustrating stubbornness, is wistful that he can’t return to the environment of his childhood. “It was a different time… you don’t know what it used to be like,” he says. “There used to be so much more. Of everything.”

Watching Jackson's performance, you get the sense that John is clinging to a nostalgic reverie that no longer exists. Despite John’s efforts to live an eco-friendly lifestyle, his nearly unchanging wardrobe over the entire show hints at a deeper stagnation. In contrast, Caitlyn is constantly changing outfits between scenes, just as she is taking on different identities and jobs over different years. Aquino delivers an absorbing performance, tracking Caitlyn’s maturation from free-spirited naivete to a resigned acceptance of compromise.

We get a real sense that Caitlyn’s personality is inherited from her father, maybe too much for her father to recognize. Despite working for publications and companies that her liberal father opposes, Caitlyn defends her ability to separate her personhood and morality from the job that she has. Moench offers her most compelling writing in these arguments. Caitlyn and John’s polarized political arguing doesn’t further any of their causes, and only deepens a divide between them that can’t easily be mended.

This divide is compounded by director Serge Seiden’s choice to have a white actor play John, and a Filipinx actor play Caitlyn. Moench’s script for Birds of North America is strangely vague when it comes to casting descriptions; Moench states that, “As a mixed race person, I am an ardent advocate of open-access casting. Yet I recognize that the world is not ‘color-blind,’ and it is absurd to pretend otherwise.”

These roles of John and Caitlyn might be fertile ground for an exploration between mixed children and their white parents. Moench herself is mixed race and Chinese American, and some of the dissonance between my father and I may come from the fact that I’m mixed race and Filipino American while he is white. But there are no references to race in Birds of North America, and these divides across color-lines go unexplored in the text.

Moench’s vague casting notes reminds me of Larissa FastHorse’s The Thanksgiving Play, a show the Indigenous playwright wrote with only white roles when theatre companies told Fasthorse that casting native actors was impossible. Because Birds of North America can be played by exclusively white actors (as it was in its East Coast premiere), it’s far more likely to be produced by mostly-white theatre companies, which is to say most theatre companies. But in an understandable bid for commercial viability, Moench has lost some of the cultural specificity seen in shows with explicitly mixed Asian protagonists, like Hansol Jung’s Among the Dead or Leah Nanako Winkler’s God Said This.

The sheer strength of Aquino’s performance, and my own recognition of seeing another Filipinx person like me onstage, deepened Birds of North America’s depiction of race for me. When Caitlyn admits that doctors won’t believe her when she goes to a hospital, I was reminded of the mistreatment of women of color in the medical industry, and the strained history of Filipinx people in nursing roles. When Caitlyn discusses her mother giving up her artistic dreams to support the family, I was reminded of my Lola sending all of her earnings in balikbayan boxes to the Philippines, in order to support her brother’s career. But white audiences without my family background probably wouldn’t read those things into the play. Those dynamics are trapped in the subtext.

One of the unexpected delights of watching the characters in Birds of North America is seeing how the characters, despite feeling stuck in one place, still can change over time. While Caitlyn starts out as a novice birdwatcher, she eventually impresses her father with her adept ability to notice detail when identifying birds.

I think the same might be true of Birds of North America as a play: while the script may start out vague and nonspecific, it’s actors and directors who will imbue the show with specificity and aliveness going into the future. Let’s hope that there are more productions of Birds of North America, like the carefully considered and gorgeously acted one at Mosaic Theater, that prove this show can grow wiser with time.

Birds of North America is now in performance at the Mosaic Theater through November 21, 2021. For tickets and more information, visit here.