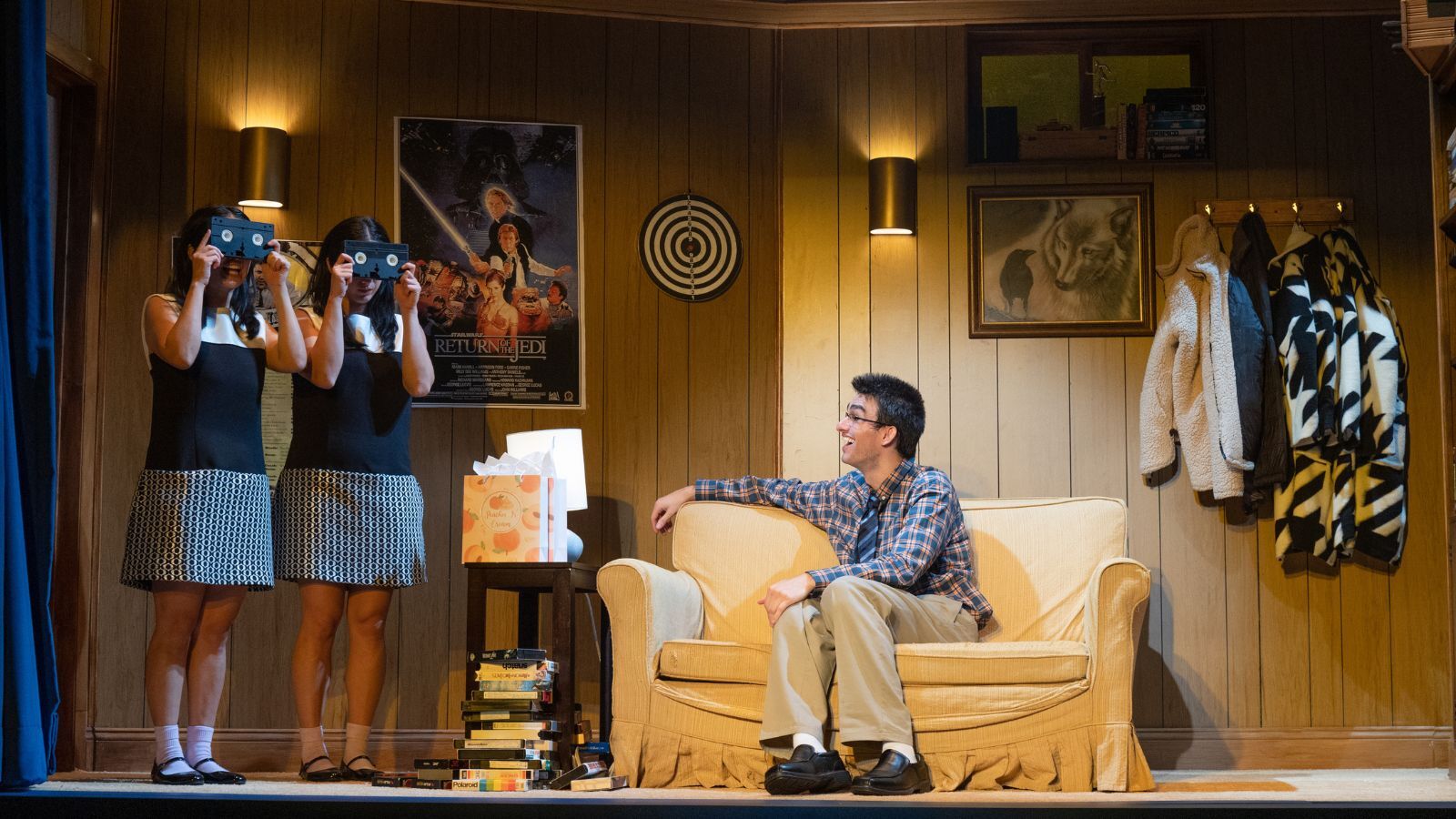 ‍Peerless asks its audience to overlook morals: this is not a fable nor a lesson. It’s a riff on Macbeth escalated into a contemporary world. The play obscures notions of the straight-A good student, the idea of familial support, and the levels to which someone will fight for an Ivy League admission. Are there moments nearing unbelievable levels of violence from high school students? Yep, but it was interesting to watch.

From the opening, we establish that M (Sasha Diamond) and L (Shannon Tyo) are bad people…twin sisters, one of whom stayed back a year in school, who are desperate for that top Early Decision acceptance into college. Add on a Dirty Girl (Marié Botha, playing John Bender meets Bellatrix Lestrange) with a few thrown away crude remarks and we settle into a twisting argument of Gen-Z proportions. Fortunately for the show, its 80 minute run is just about as much villainy as I can take: there’s a reason storytelling most commonly uses a hero, underdog, or “good” protagonist, and that reason is probably that it’s kind of exhausting to watch people be wicked with minimal ceasefire.

Playwright Jiehae Park has crafted characters shockingly capable of this scheming. Park obscures the character’s personal details, expounds their sonic and visual style, and voids a complete range of emotions to make mostly nameless characters M(acbeth) and L(ady Macbeth) capable of unthinkable thoughts. Combine that with a preppy, perfect student disposition and the dissonance is jarring. The hyperrealism noted in the language, design, and presentation (Olivia Rodrigo in the preshow playlist) quickly becomes more surreal as the leads refuse to suffer remorse. Outside of our main duo, even Dirty Girl/Preppy Girl and BF (Anthony Cason) are minimized, more spinning tops in a whirlpool of chaotic action than characters who grapple with consequences.

D/D’s Brother (Benny Wayne Sully) is a much more complex character pairing, as the actor covers both the means-well-but-awkward D, and later, the chronically disabled D’s Brother. By placing themes of mental health, physical disability, and Indigenous identity on one track, this role stands out for the sheer level of emotional vulnerability. Sully handles it with endearing humor, but across from the shallow and scheming M and L, these scenes become an unbalanced challenge of ethos.

With most of the focus on protagonists M and L, the supporting characters take turns getting lost. Dirty Girl and BF are far, far removed from time spent in D’s home, and while that makes sense on paper, we’ve been set up to see them as active participants in the action, not asides and epilogue players.

For a new play being billed as a take on Macbeth, the 1:1 character and plot comparisons get slightly blurry, though the language is a much appreciated deviation. Park’s dialogue is witty and quick, and director Margot Bordelon’s style thrives here in its hyperspecificity. Each cadence, movement, and transition are planned with near-clinical precision thanks to blocking that has the actors full-out-no-marking sprinting and/or speaking with a speed that must require a variety of diction exercises.

Sound design and composition (Palmer Hefferan) are a knockout, as most of Hefferan’s work is (Kate, The Skin of Our Teeth, more). The scenic work (Kristen Robinson) is also top notch, drafting a monochrome playing field equipped for all the physical movement required. Robinson’s design is seemingly simple, though late-in-the-game surprises and reveals only add to the well-crafted set.

The design, direction, and performances create a seamless world, though considering the murder, cruelty, etc., not necessarily one I want to be part of.