IN THE HEIGHTS Lives Up To Its Name — Review 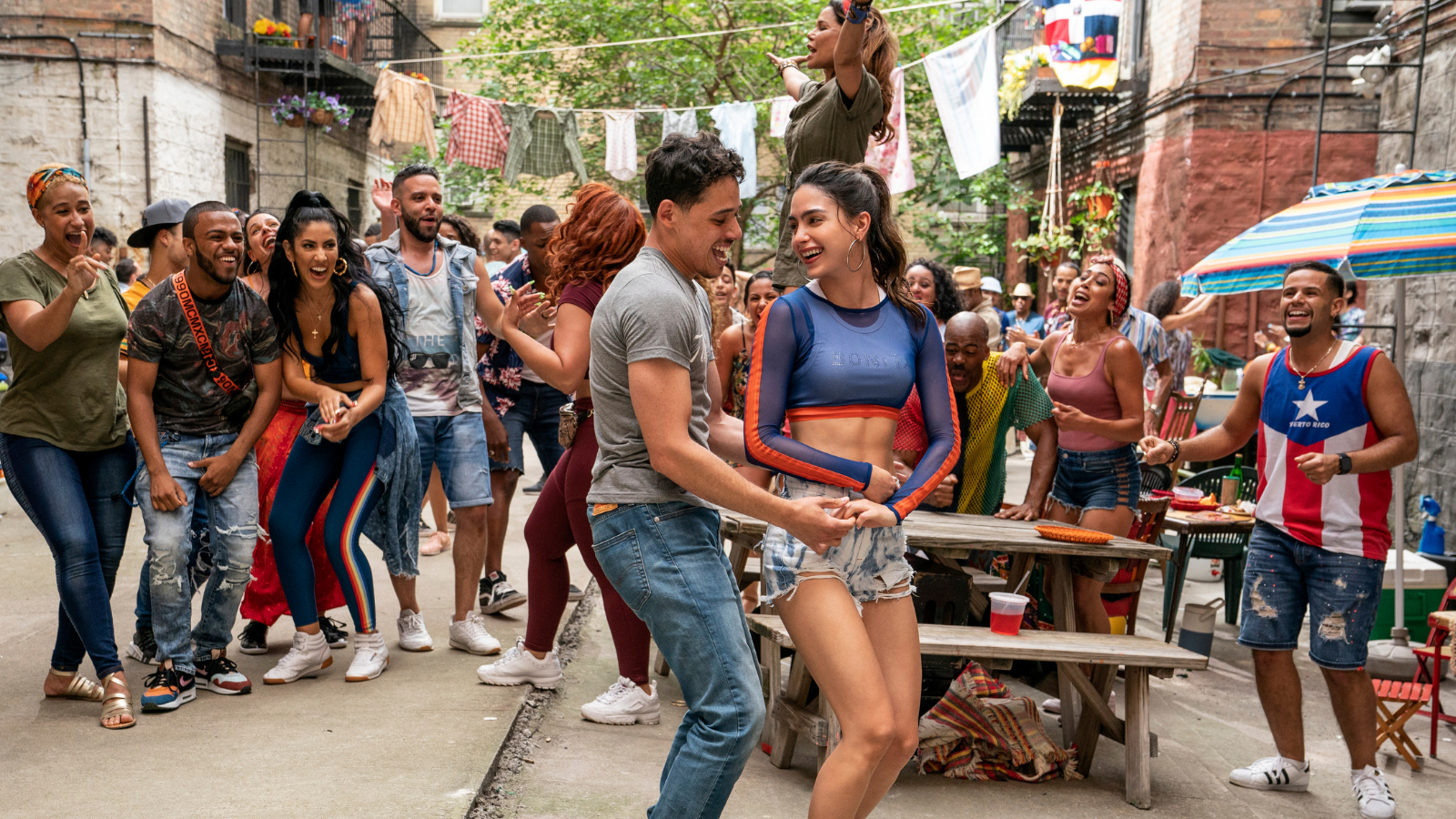 "In The Heights" hits theaters and HBO MAX starting June 11
By
Juan A. Ramirez
No items found.
on
Category:
Reviews

Leave everything at home and tell that friend with the speakers to come through, because Jon M. Chu’s In the Heights is the glimmering rainbow under an open fire hydrant, and with just as much force. From its electrifying opening number, the film cements itself as one of the great movie musicals, and sets a high bar for those to come.

Adapted from Lin-Manuel Miranda’s stage musical of the same name, it follows Usnavi (Anthony Ramos), a Washington Heights bodega owner who dreams of returning to his family’s Dominican Republic. Around him, a tight-knit community struggles to remain in place as a rapidly gentrifying New York threatens to change their way of life.

Ramos, who a few years ago played Lady Gaga’s best friend in A Star Is Born, here fulfills that title’s promise: with a generous charisma that feeds into and off of his castmates, the young actor is a star. In a role that can scrape by on cloying earnestness and a forced, “Oye, papi!” Latinidad, he gives a lived-in performance that’s vulnerable in its pluckiness, confident in its identity and sense of place.

How could it not? He is surrounded by a stellar cast which radiates the infectious energy of simply being happy to be here. Melissa Barrera’s Vanessa, an aspiring fashion designer after whom Usnavi pines, holds her own against Ramos’ fierce presence. As the gossipy salon owner Daniela, an imperious Daphne Rubin-Vega leads two of the film’s best numbers — a giddy gossip session at her store, and the rousing “Carnaval del Barrio.” The singer Leslie Grace, as first-generation college student Nina, is a charming screen presence and performs the lovely “Breathe” with deeply felt emotion.

Her chemistry with Corey Hawkins’ Benny leaves a bit to be desired but is redeemed with their tender final duet. Miranda takes the small, winky role of a piragua vendor, and singer Marc Anthony has a brief cameo as Sonny's father.

The cast’s vocal prowess thankfully sidesteps the high cringe possibility that arises when blending hip hop into musicals. Assured yet bursting with life, each and every one is completely at home with the material and, under Chu’s savvy direction, evokes the satisfying combination of an ice-cold bottle under a blistering sun.

Then there is Olga Merediz, reprising her Tony-nominated role as Abuela Claudia –– biological grandmother to none but, spiritually, to all. She advises “Paciencia y Fe” (patience and faith) as her neighbors sweat through the hottest days of the summer, before reminding herself in the stunning number of the same name. The struggles of immigration and of the shifting concept of home find a wistful, determined beauty in Merediz’s performance, as her character rides a subway car into her Cuban past.

The scene follows through on what movie musicals ought to always (but seldom ever) do: use the camera to build out from the stage, not stage everyone into the camera. Chu, rightfully hailed for his work on Crazy Rich Asians, establishes himself as a top-tier director of ambitious, heartfelt blockbusters. Unafraid to — imagine! — have fun with the medium, he and cinematographer Alice Brooks sustain a surge of inventiveness that’s hard to not receive as hope for the future of the movie musical.

Along with Quiara Alegría Hudes, whose screenplay rearranges some of the stage production’s numbers to the film’s benefit, Chu and Brooks form a powerhouse trio that I hope includes further collaboration. Their world venerates the matriarchal power of Latinx communities while extending that same privilege to the rest of the neighborhood. Christopher Scott’s choreography finds communal beauty in large group numbers, with passersby creating an ever-present body of physical commentary and support. Fluid, fun, and intensely skilled, his work peaks during a nightclub scene that is surely the best movie musical dance scene since West Side Story.

All pandemic things considered — it was originally scheduled for a 2020 release — In the Heights is the perfect big-screen sensation for a summer of collective heat and renewed love of community.