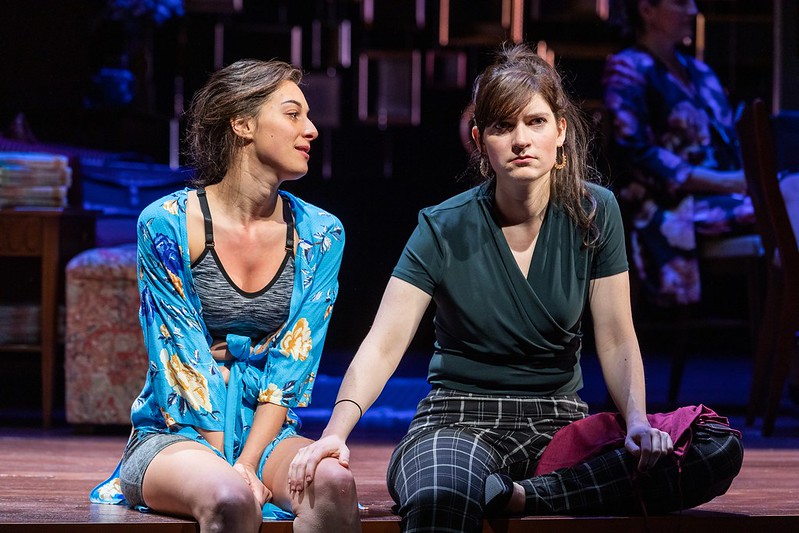 Theatre Talk Boston (henceforth TTB) recently sat down with Dana Stern (DS) and Liba Vaynberg (LV) who currently star in Lila Rose Kaplan’s world premiere We All Fall Down at the Huntington Theatre Company. Read to find out more about their sisterly bond onstage, working directly with the playwright, and so much more!

TTB: For those who are unaware, can you guys describe what the play's about?

DS: It's about a family coming together for the holidays to celebrate Passover. They've never done anything like this before. This is their first time!

DS: Yeah, very secular. Out of the blue, their mom decides to have a Seder. No one really knows how to deal with that. A lot of secrets come out and drama ensues.

LV: Everyone's under the same roof and has no idea what they're doing, so comedy ensues as well.DS: And it's a family on the holidays, which is always fun!

TTB: When I was watching, I saw that a lot of different plot points were going on at the same time. One minute you were talking about something very lighthearted, and in the next you're discussing heavy topics within the family. How did you two, as actors, keep up with it all? How did you switch back and forth?

LV: I think what you're describing is one of the strengths of Lila Rose Kaplan's writing. When you're with family, there are no transitions. Your mom can be totally great in one moment, and then she turns around and cuts you where it hurts the absolute most. I think that's what happens in this play a lot; people are deeply loving and considerate, and then you push the wrong button and a bomb goes off that you didn't even know was there. You can be in a minefield that you weren't even aware you were walking through. You live on a razor edge in a way that you don't with anyone else.

DS: That’s true in being a part of any family, especially in mother-daughter relationships. Those are so complicated. I also think that in this play we all sort of have a slightly different story, just like what happens in families. There's no real ultimate climax that every character is experiencing together. Each character has a climax at a different point in the show because they all have a different reality within the family structure and experience relationships with one another in different ways.

TTB: This is the world premiere of this play. I'm sure there were many edits that were going on during that time. How has that process been for you guys? What was it like putting this play in front of an audience for the first time?

LV: I think it's amazing! There is nothing like live theatre. An article is being circulated right now about how people's heart beats synchronize in the theatre while you're in a show. Theatre doesn't have as big a reach as it used to, and it should! A friend of mine once asked me if they actually write new plays! I told her, "Yes, they do! It didn't stop with William Shakespeare! People are continuing to write new pieces. It's not just comedy specials and TV shows! " I always feel really lucky working on a new play. During the process, we get new lines and changes all the way up to opening and even once we've started performing. It might be abstractly "difficult", but that's the whole point!

DS: We're very fortunate as actors to get to work with the playwright. We approach the character from the actor's perspective, so working with the playwright and getting to collaborate is great. It's a give and take experience; the actor is able to say, "this is what I'm feeling inside for the character. What are you experiencing on the outside?" Theatre is getting to collaborate as a group to get the audience's feedback and see what lands and what doesn't.

LV: What do you guys hope audiences take away after they see your production?

DS: I am always very attracted and touched by pieces that approach tragedy from a comedic point of view. I think that's such a great lesson to learn in life, because humour, darkness, love, and hate are really intertwined. The mother in the play approaches these very dark and scary situations from a humorous standpoint. That's a great lesson and a great way to deal with the hardships of life.

LV: This is this play is not explicitly romantic, but it's romantic about family. I also think the play is about the power of ritual. Coming to the theater, getting your ticket, sitting down for your ninety-five minutes, getting dinner before, and getting a drink after is engaging in a type of ritual. We see this family grapple with the power of ritual in the form of Passover. We are doing a play every night in which we ask the audience, "Why is this night different from all other nights? How does repeating the same thing make something new? How do the rituals you had in childhood fundamentally form you as an adult?" These are big questions in the play as the daughters struggle to redefine ritual, while the older generation struggles to remember it.

TTB: Time for a Theatre Talk Boston tradition! We always ask our guests if you have any fun onstage mishaps stories?

DS: We've bonded very much as sisters and we have developed a strong giggle bond. A lot of moments during the show we try to get the other to break and giggle. It's more common than anybody realizes! It comes out of trust and is part of the journey.

"We All Fall Down" runs at the Calderwood Pavilion at the BCA thru February 16th. Tickets are available at https://www.huntingtontheatre.org