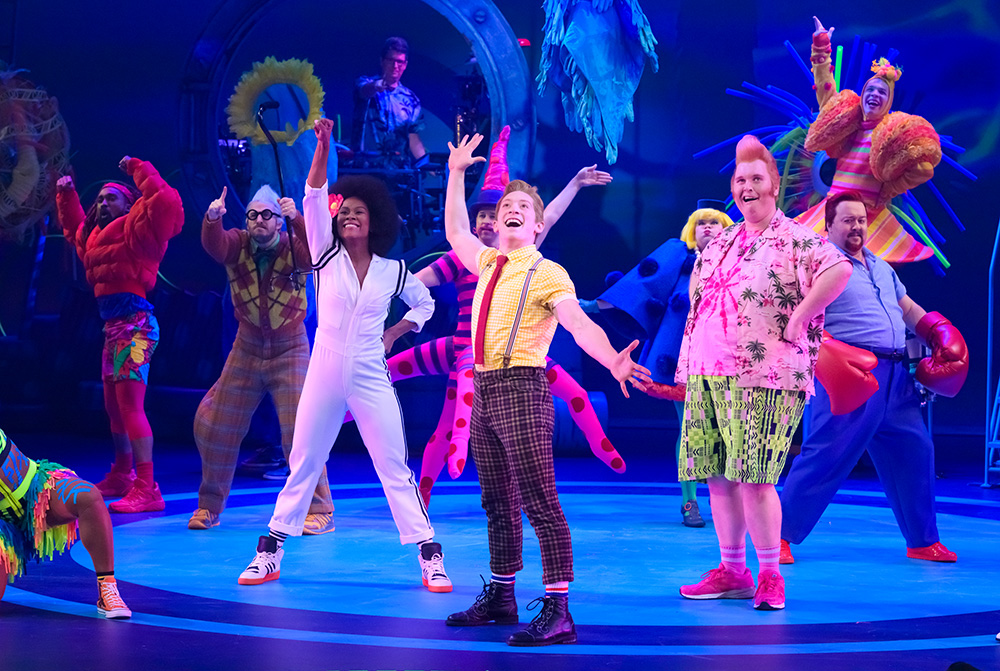 Cast of The SpongeBob Musical: Live On Stage! | Photo: Nickelodeon
By
Kobi Kassal
No items found.
on
Category:
Features

We recently caught up with Tom Kenny and Ethan Slater of The SpongeBob Musical: Live On Stage! before it makes its debut on Nickelodeon on December 7th. Kenny, who originated the voice of Spongebob back in 1999, joins the cast as Patchy the Pirate and is joined by original Broadway cast member Slater who plays the lovable yellow titular character. Read to see the two of them discuss the impact of the show, what it means to bring it back, and their own connection to Boston!

TTB: Hi, Ethan and Tom! Thanks for talking with me today.

Tom: So...Boston. You know I spent some time up there–love the city.

TTB: Oh, really? What were you doing up in our neck of the woods?

Tom: I started doing stand-up there after college. 1983 I think–and you know me, not having a backup or plan B after college I decided I wanted to get into the comedy scene and one thing led to another and then I got Spongebob so it all worked out.

TTB: That’s awesome! So, take me back to when this musical was being created–what were your first thoughts when you heard they were making it into a Broadway show!

Ethan: Well, I didn’t really know about it at all! The first time I heard was when my agent called me in for the audition. I went in for an untitled “Tina Landau Project” that at one point in time was also called “Bubble Burt” I think?! I first fell in love when I read the script and saw that it was not over the top. The humanity of the piece really shines through and that’s what makes it so special to me. I was extremely skeptical but as soon as I got to see Tina’s spin and angle on the piece–I knew it was in good hands. They weren’t trying to do a huge grand arena show and milk the cash out of this project. And Tina... come on. When I walked into the first rehearsal, I brought my Viewpoints notebook from college to have her sign it–she did! The team spent years and years taking the DNA of the piece and fleshing it out–I’m very proud of what we produced.

TTB: Talk to me, Ethan, about playing this iconic character on Broadway–what was that experience for you?

Ethan: It was extremely special. There was just so much love and energy that went into this project–I will never forget it. It was a truly magical experience for me and the entire cast and that is why I am so grateful to Nickelodeon for bringing this back and reuniting all of us.

TTB: Well I loved it on Broadway, and I can’t wait to see it on T.V. this weekend! So, Tom, I know Ethan is a huge theatre nerd–but did you also grow up loving musical theatre?

Tom: *laughs* You could say I was the total opposite of a theatre kid. Wait that’s a lie–I was in my 8th grade production of Mary Poppins!

Ethan: And I hear it was very well received by all the critics.

Tom: Why, yes of course. But no, I was much more in the comedy scene–I wanted to be on SNL and SCTV–a much different direction. I loved being a character actor and trying different voices–that is what excited me growing up. It took me 57 years to get in touch with the theatre side. I have a teenager who loves Broadway so I am now theatre-adjacent you could say but it has been such an awesome experience working on this show.

TTB: So, what were your reactions when you heard they were bringing it back for television?

Tom: I’m sure Ethan heard way before I did!

Ethan: Yeah, you know it was a little crazy. I thought I was fully done with it. Closing the show on Broadway was very hard. The Palace Theatre is about to go through a major renovation so being the last show there was special. When Nick called, I was overjoyed. It has been just the most amazing reunion–we are all a family. Gathering almost all of the original cast it was been just wonderful.

Tom: And I’ll say being the new one in the mix. I was welcomed with such open arms–the entire cast immediately embraced me.

Ethan: I really missed doing it. Most people always say I wish I could go back and do this or do that, and in this case we were actually able to do that.

Tom: So… it’s basically "21 Jump Street" meets "Spongebob" is what we are telling you.‍

‍TTB: Haha, that’s amazing! And I heard we might see some changes here and there from the original production–what can you tell me?‍

Ethan: You know as an actor sometimes you get cuts and you are so angry, but I think with this version we really found the sweet spot and to be honest I do believe this is the best version of the show out there. It serves for better storytelling in my opinion.

Tom: So, we can’t exactly say what–but now that we are on broadcast, we had to fit it in a certain timeframe, but we have found the perfect mixture and I think audiences are going to get so much more out of it. And when you see what Ethan does on that stage you all are going to lose it. I know from talking to him that his show left scars on his body–there are certain things that just can’t be done eight times a week while performing this beast of a show, but I know that audiences are going to love it so much when they see it.

The SpongeBob Musical: Live On Stage! will simulcast on Saturday, Dec. 7, at 7:00 p.m. (ET/PT) across Nickelodeon, TeenNick and Nicktoons.