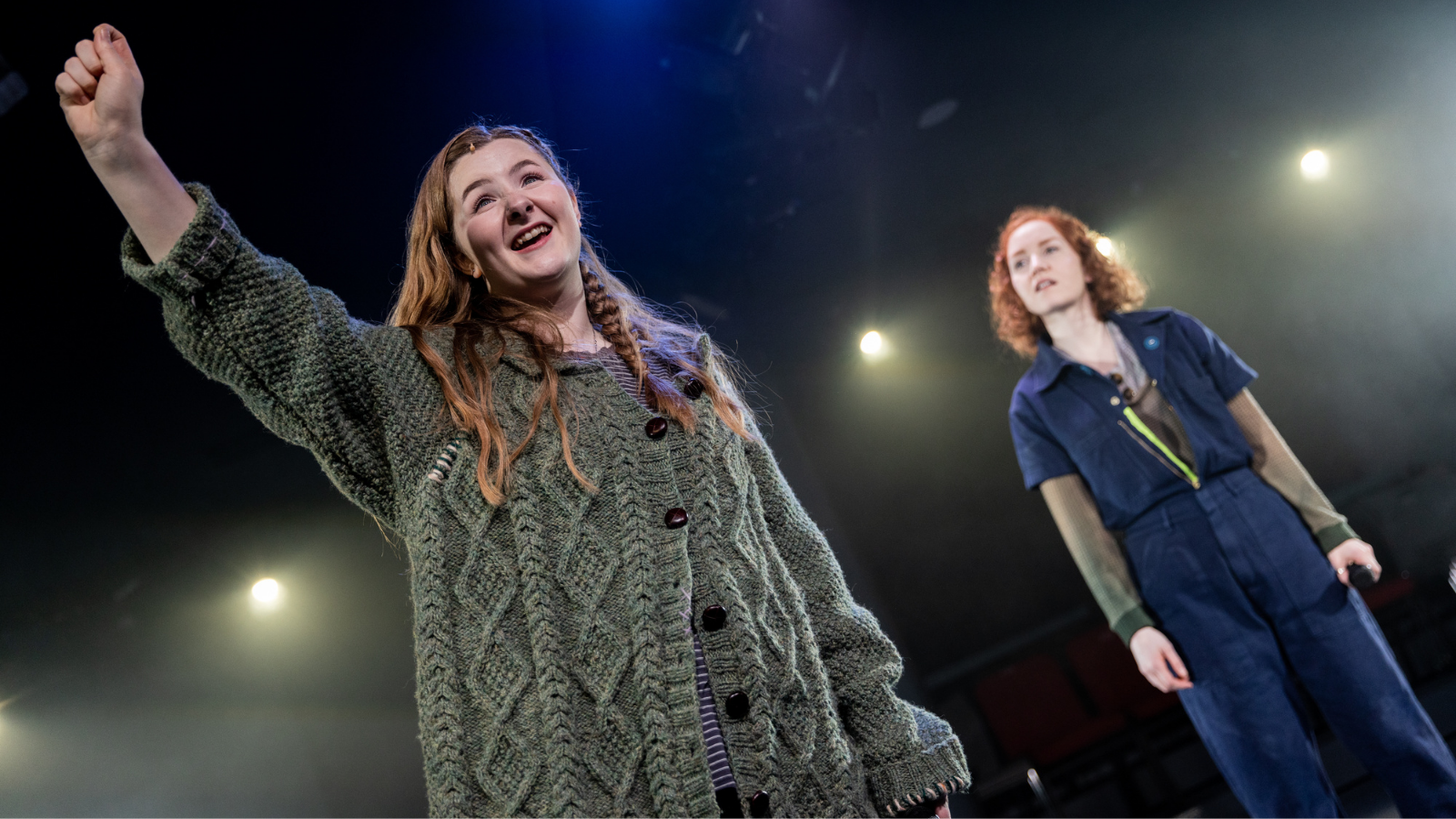 Even as a dual US-UK citizen who spent his whole adolescence in London, I’ll admit that I struggled to parse a few lines–which is sometimes intentional, and honestly a delight. It forces one to truly lean in and focus, to hear the language and feel out every bit of intent. Which for this delightful new show proves very, very rewarding.

Islander comes to New York from multiple acclaimed runs in the UK. It began its life at the Mull Theatre in 2018 and toured Scotland before landing at the Edinburgh Fringe Festival in 2019. It then transferred to London’s Southwark Playhouse later that year. Now it opens the newly refurbished Playhouse 46 at St. Luke’s, an intimate space below Saint Luke’s Lutheran Church in midtown.

(Good riddance, by the way, to the space’s previous operators West End Artists, who programmed schlock like Friends! The Musical Parody and My Big Gay Italian Wedding and never would never have entertained an ambitious work like this one. We are fortunate that the church has handed over operations to a new team, led by executive director Jennifer Pluff.)

Islander is a two-hander, but a vast tale. It follows Eilidh (Bethany Tennick), the last youthful resident of an island abandoned by most friends and family. Even Eilidh’s mother has decamped to the mainland to find work. Soon, a community vote will determine if the island should be abandoned entirely as its resources dry up. But then Eilidh meets Arran (Kirsty Findlay), a mysterious figure just washed up to shore, and her mythic origins change the fate of the island forever.

The very talented Tennick and Findlay also play friends, family, and townspeople, jumping between a vast array of personalities with astonishing versatility. (Eilidh’s darkly humorous grandmother gets the most impenetrable twang, but her meaning is always clear even when the words are indecipherable.) The two performers also create live music and sound using looping technology, jointly crafting a soundscape that conjures everything we never physically see: sea air, wind rushing by, a vast ocean on all sides.

Stewart Melton’s book has an airy, unfocused quality that is mostly an asset. At its best Islander is pleasingly distractible, starting its story over three or four times before really getting going, jumping between island locales and adding a few too many ancillary characters. It’s all very Brits Off-Broadway in vibe, loose and fun. Still, the piece is begging for a tighter focus on Eilidh and Arran in its latter half, a focus Melton never really allows until the very end.

The advantage of all those extra characters is witnessing Tennick and Findlay bring a unique empathy and specific vitality to each and every islander. Even a potentially throwaway gag like Paul, a newsagent whose only concern is his missing garden gnome, becomes a melancholy mini-arc in their sensitive hands. Meanwhile the two never lose focus on Eilidh and Arran’s bond, letting it grow quietly and naturally. The live looping performance, in addition to being very cool, enhances the storytelling as we feel the duo playing in closer sync as their connection grows.

Most importantly, the songs are bops, one and all. Finn Anderson’s harmonies are pleasingly bouncy, the words sweet and playful. “Video Call” lyrically captures a choppy connection, “Spikkin” a fractured community roiled by uncertainty. “Same But Different” will be stuck in your head for weeks. You just wish each number would go on even longer.

But modesty is the name of the game here, in all respects–even politics. Islander is a sorrowful reflection on the destructive consequences of climate change, but never underlines that message, letting the story of a depleted island and forgotten young people get the point across. The closest Islander gets to spelling it out is in its final exchange, and Eilidh and Arran’s moving words of parting:

“If the whales are still swimming.”

Islander is now in performance at  Playhouse 46 at St. Luke’s on West 46th Street in New York City. For tickets and more information, visit here.

Editor's Note: An earlier version of this review stated that the production started at the Edinburgh Fringe Festival in 2019. It indeed started a year before at the Mull Theatre.