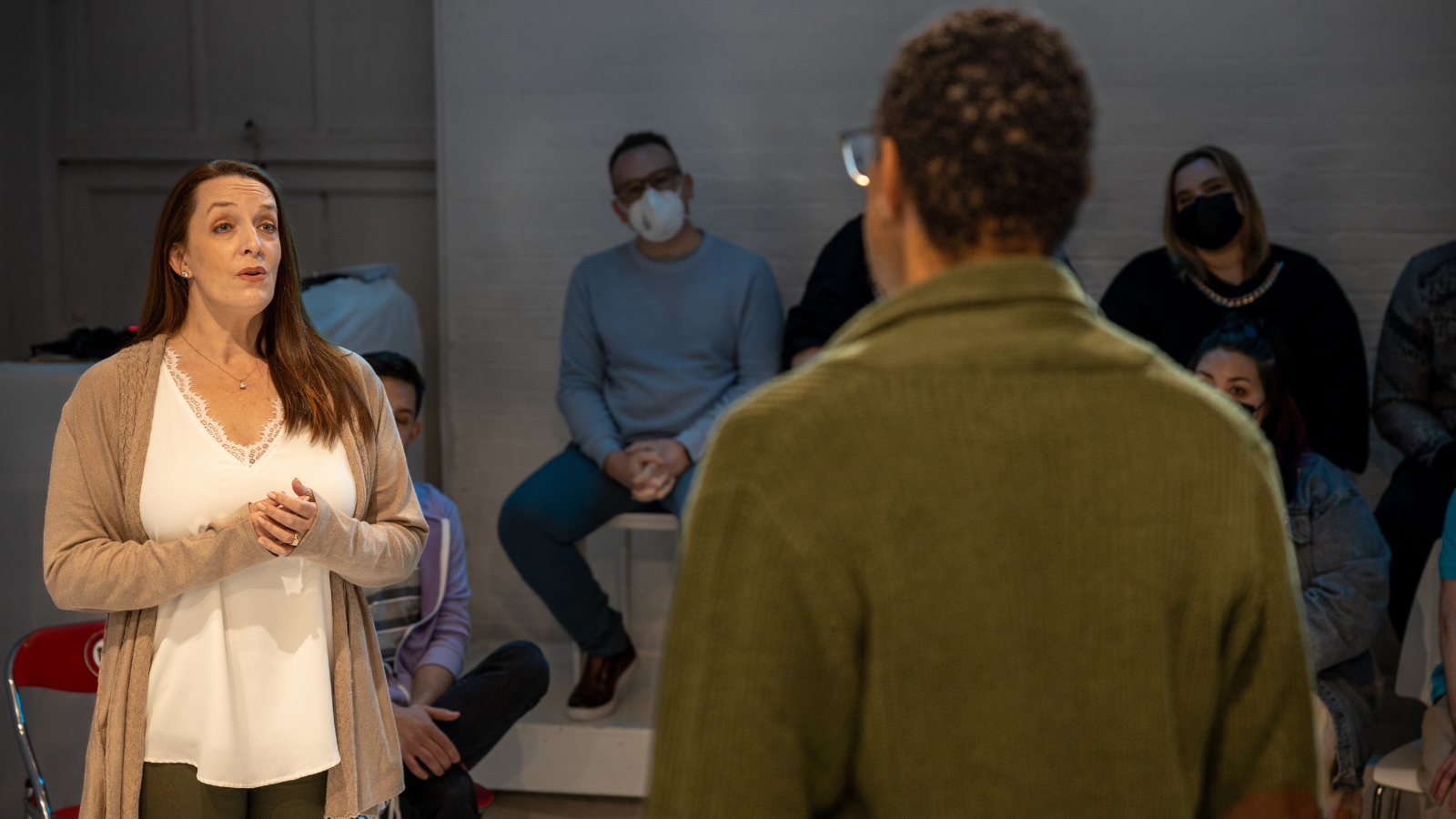 Julia Murney is one of those actors who you know will deliver a top-rate performance, every single time. In her latest role, she has joined Out of the Box Theatric’s new and improved version of David Shire and Richard Maltby Jr.’s Baby as Arlene.

I recently caught up with Murney via Zoom to chat all about updating the script, finally getting her Arlene moment, and returning to the stage.

Our conversation has been edited and condensed for clarity.

Were you ready to hop right back into performances or were you really enjoying the downtime of the pandemic?

It's an interesting question. I did almost nothing for most of the pandemic, I mean, we're still in the pandemic, frankly, I think, but for most of the epicenter of it. And did not frankly have a song in my heart to do anything. About a year ago I started doing some concerts with the 92nd Street Y which was odd unto itself because there was no audience. But with Baby I had to start training myself honestly — I've been much more worried about my retention capabilities. When you're so used to learning lines or music or whatever because you have to do it all the time and then you don't do it for a little bit, it can be a challenge. I've never done Baby. I saw Baby on Broadway with Liz Callaway and Catherine Cox and Todd Graff and I wore that cassette tape out back in the day. So the music as it existed on the recording I was familiar with but I certainly didn't know any of the lines and frankly, the show has been so rewritten, no matter if I knew them anyway, it all would have changed!

What drew you to this project? Was it the music? Was it just getting back out there?

I think it was a combo platter. I mean, it's always nice to be asked! Also, when I was in college, I was offered at a summer stock to play Lizzie, but I didn't do it because I came home to take acting classes in New York. So I missed my Lizzy opportunity, and then as time went by, I realized I was missing my Pam opportunity. So to be asked to do this and to actually get the chance to do it, it was a no-brainer. I know Richard Maltby and David Shire and I worked with them before, and frankly, the company that is putting it up Out of the Box had a wonderful filmed version of The Last Five Years during the pandemic so it all just came together perfectly.

What do you love so much about Baby?

The show is about three couples who are at three different stages of their lives, who all either find themselves pregnant or are attempting to get pregnant. And it's about the sort of journey of a pregnancy and eventually childbirth. And it's very much a love story. The score is so delightful, and there's a reason that people are still singing some songs from this show all these years later. The opportunity as an audience member to come and see parts of themselves in those couples is just wonderful.

Talk to me about your cast and working with them to discover the characters in this new version.

Well, I only knew one person, Robert Fowler, who I play opposite. Everyone else was brand new to me so that is just so exciting in general. The show in general is really separated into the three separate tracks of the couples and we don't intermingle all that much. This has been a very, very fast and furious process of getting the show up on its feet and any free second I would have I would be working on my lines, but everyone is just so talented, I am excited to collaborate with not only such a kind group of people, but a dedicated one as well.

I last caught Out of the Box’s Baby in a 5th floor walkup apartment and now it will be performed at Theatrelab. Does that excite you as an actor to have non-traditional playing spaces?

I've certainly done shows in small spaces where the potential to see the audience is much more prevalent than in a normal proscenium kind of house but I am someone who does not focus on faces as best as I possibly can — I don't want to get distracted. It is such an intimate story, and I am excited for audiences to come experience it in this new way.

I know you have been busy with rehearsals and performances, but have you caught any other shows here in town recently?

I recently caught Tina, which I was supposed to see that Saturday after lockdown and clearly I did not. It was wonderful and I caught the final dress rehearsal of Jagged Little Pill because my dear friend Heidi Blickenstaff recently joined the cast and she is just remarkable!

Ultimately, what do you hope audience members take away when they come to see this new production of Baby?

Well, I certainly hope that more people feel seen. This was last on Broadway in 1983. So look, that era was what that era was. We are in a different place and we are moving toward a better place. So when you went to see that original cast, and look up at the stage to see just one color telling a universal story, something is amiss. It's a story about humanity and a thing that humans go through. So I hope that people are able to come and see more of the breadth of humanity in front of them that they can absorb and see themselves in. And I think that's the biggest thing that I hope and I hope that it gives some sort of a return to the show. I hope that people can relate, even if they are people who are not who don't have children, are not planning on having children — that there's something in the relationships that they see or something in that feels right and true.

Baby is now in performance at Theatrelab through December 12, 2021. For tickets and more information, visit here.