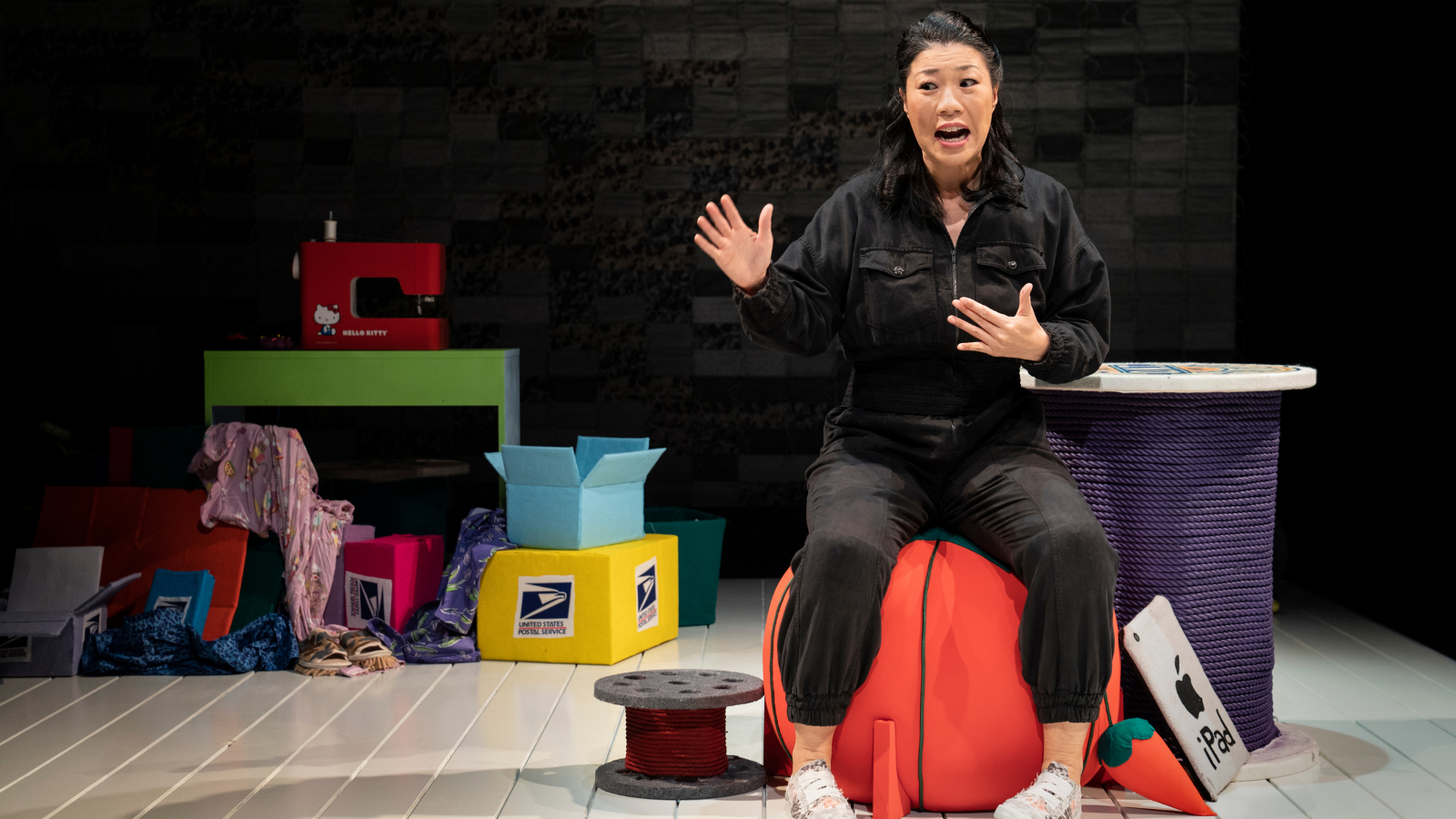 “Hello human!” Kristina Wong yells to a fellow sewer-in-arms from a safe distance, waving and smiling. “Are you scared? I’m scared too. Let’s do something about this together, shall we?”

The pitfalls of pandemic-inspired theater are, at this point, well-known. There's understandable audience nerves about reliving fresh trauma. There’s the potential grossness of wringing collective catharsis out of a crisis that isn’t, you know, actually over.

What can get lost, though, is holding space for injustice, the colossal failure of government which has led us to over 700,000 dead in the US alone. It’s not something one loves to think about—it’s just too overwhelming, or enraging. And outside of The Public Theater’s The Line last year, artists have seemed unsure how to confront this topic while still delivering a satisfying night at the theater.

In comes Kristina Wong to (forgive the pun) thread that needle. And thread it she does.

Kristina Wong, Sweatshop Overlord is an exuberant release of a show, a total joy to behold. Wong unfolds her tale of a ragtag group of quarantined volunteers who sewed thousands of masks with boundless, chaotic energy. But the show, which opened tonight at New York Theatre Workshop, also never loses sight of an essential fact: none of this should have been necessary.

In March 2020, Wong is stuck at home in Koreatown, Los Angeles, doom-scrolling and feeling useless like the rest of us, when she reads reports of first responders unable to get a hold of masks. Wong takes to her sewing machine, and soon finds herself leading an army of “Aunties” sewing away across the country. Some are family; some are fellow artists; some are retirees. As their numbers swell, the Auntie Sewing Squad—or “ASS,” as Wong delights to point out—is born.

“This will be a three week project,” a harried Wong insists early on, shortly after entreating audience members to throw spare elastic at her. “Soon the post office will be delivering five masks to every address in America, and that will make us obsolete!” (We chuckle knowingly at the reminder of an outrage long forgotten, lost in a sea of new outrages that followed.)

In fact, ASS’s work will of course stretch on, and on, and on. Sweatshop Overlord expertly captures the pandemic’s cyclical hells without ever itself growing repetitive. One moment, Wong and the aunties are navigating the resurgent Black Lives Matter movement and confronting their own privileges; the next, Wong is paying loving tribute to photographer Corky Lee, who documented Asian-American history for the past 5 decades; somewhere in between, she finds time to shoot masks into the audience with an air cannon.

That all this chaos can co-exist successfully in Sweatshop Overlord is a testament to Chay Yew’s masterful direction. Yew finds a precise tonal balance which indulges Wong’s anarchic style without ever letting the evening slide into glibness. Colorful sets and costumes, by Junghyun Georgia Lee and Linda Cho respectively, provide a huge assist—particularly Lee’s ingenious set, which builds Wong’s quarantined world entirely out of fabric, down to a cute little sewn iPhone. Lee’s designs are gleefully silly but full of warm significance, much like the show as a whole.

Wong’s honoring of Corky Lee is an especially moving segment, and speaks powerfully to a theme of historical remembrance that runs Sweatshop Overlord. Lee worked to correct history that left out Asian-Americans through his work, as Wong here seeks to honor the work of her “Aunties” (mostly Asian women, but also Black, indigenous, trans and non-binary individuals) whose contribution, she knows, could so easily be forgotten. Shocked gasps at the news that Lee himself died of Covid-19 in January sadly affirmed Wong’s point.

The only issue there is that Sweatshop Overlord may not, by its nature, be the kind of show that stands the test of time. It is perhaps a bit too directly and closely tied into this very specific moment, the exact journey this audience has shared. When RBG’s face pops up behind Wong and she encourages us all to scream “FUCK!” in unison, it’s immensely satisfying, yes, but also feels very 2021.

No matter. For right now, Sweatshop Overlord is a glorious catharsis, hopeful and fun without ever losing sight of harsh realities we still must face down. Bow down to the Overlord.