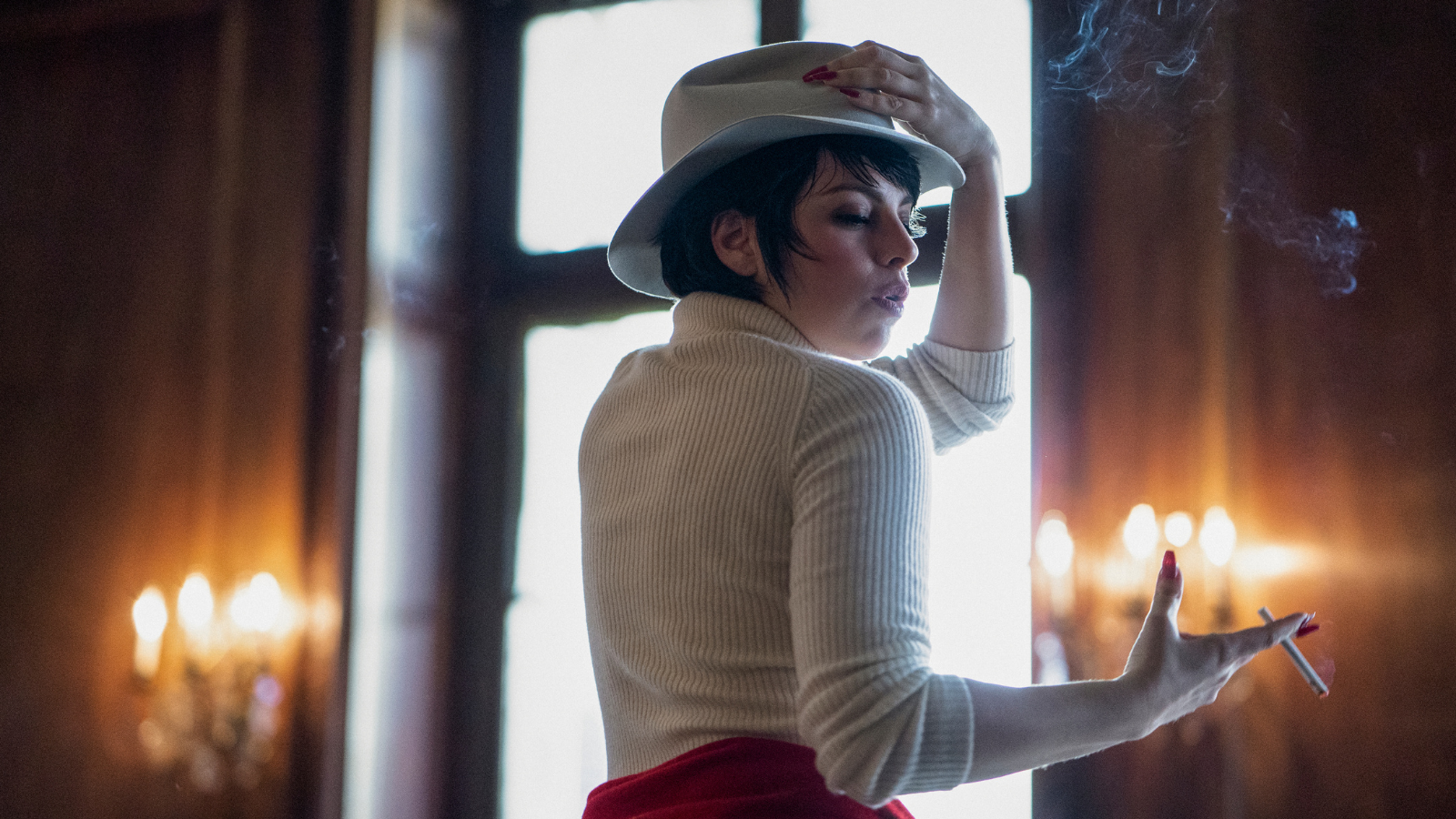 Rodriguez at Minnelli in HALSTON | Photo: Atsushi Nishijima/Netflix
By
Juan A. Ramirez
No items found.
on
Category:
Features

Krysta Rodriguez has spent much of her career playing ambitious, off-beat women. From Wednesday Addams, to Ilse in Spring Awakening, and Megara in the Public’s Hercules, her characters have often reflected her own scrappy, can-do spirit.

In the Netflix miniseries Halston, about the fashion trailblazer’s life, she has found a perfect match playing Liza Minnelli. The EGOT recipient was a close friend of the fashion icon, and their Studio 54-heavy lifestyles closely mirrored each other in their highly publicized mix of brilliance and self-destruction.

Beyond a striking physical transformation, Rodriguez stood out by living up to Minnelli’s talent and charm—her first scene, an electric nightclub performance of “Liza with a Z”, is as good a character introduction as any this year.

I spoke with the actor about what makes Minnelli a popular culture legend, and delved as deep into stan territory as any self-respecting Liza fan should, when presented with the opportunity. Our phone conversation below is edited for length and clarity.

“There's a lot of things about her that I loved digging into,” she said. “I’m thrilled to be someone who plays women that can be a little bit complicated and messy and get their hands dirty.”

A tabloid-frenzied lifestyle wasn’t the main source of messiness Rodriguez enjoyed exploring. The actor said that while Minnelli’s vocal technique is “perfect,” she toyed with a unique ability to “throw it away and move from her chest and heart to give it everything.”

“The way she performs is with total abandon; it doesn't have any stopping point,” she added. “She's never holding herself in any way. She is going all the way, and if that means she makes a face that's not attractive, or if she's sweating and her hair stuck to the side of her head, that is more exciting to watch.”

Exploring this controlled-chaos technique struck the actor as the opposite of what ‘proper’ musical theatre training usually strives for.

“As we grow up in theatre, we try to be perfect,” Rodriguez said. “We keep trying to do the right thing and never make a mistake, but you soon realize you can't possibly do a show every night, for hundreds of performances, and not make a mistake. [Minnelli] brought with her the idea that it’s okay to revel in your mistakes, and in the parts that might seem messy and more unsavory, to let people see you as a real person.”

Rodriguez, who was diagnosed with breast cancer in 2014 and penned a number of Cosmopolitan articles about her experiences with chemotherapy, said Minnelli’s openness about her own struggles became a strong point of connection to her character.

“The struggles in her personal life were very well documented and discussed by her, which I find really inspiring,” she said. “I went through my own trials, and I feel that people like her gave me permission to talk about it and help others, because she was open with her struggles with addiction and her family and childhood and all that.”

Relating to Minnelli in her adult life seems a natural progression for Rodriguez, who said she had been a fan of Judy Garland (Minnelli’s mother) as a child, since “she stayed in a very family-friendly realm all the way to the end, whereas Liza completely broke out and did edgier work.”

“Liza was immediately seen as a more complicated actress,” she added. “In her first movie, The Sterile Cuckoo, she played somebody with mental illness who had a very complicated coming of age story, and that’s how she burst onto the scene and got her first Oscar nomination.”

The then-23-year-old Minnelli’s performance in The Sterile Cuckoo (1969) is Rodriguez’s personal favorite, citing a 7-minute one-shot monologue in the film as “one of the greatest things I’ve ever seen.”

It was through Liza with a Z that Rodriguez first encountered Minnelli. The Emmy- and Peabody-winning concert special––reportedly the first shot exclusively for television––features in an early episode of Halston, which sees Rodriguez recreating the show’s “I Gotcha” number.

“That's the quintessential messy, all-out performance I've come to be obsessed with from her,” Rodriguez said. “It’s typically a man’s song, and she’s giving it a very grungy energy that wasn’t of that time, and not necessarily a crowd-pleaser that you would expect from her. Then, immediately after, she does “Ring Them Bells”, so she totally knows what the audience is there for, but she’s like, ‘I’m gonna do this.’”

The 1972 special, costumed by Halston and directed and choreographed by Bob Fosse, was “formative” for Rodriguez as a high schooler, she said.

“No one was selling out concerts the way she was doing at that time,” she said. “No one was booking places like Carnegie Hall for days on end and doing full one-woman shows there. She was a pioneer in that way, especially as a woman in that time. It’s exceptional that [in Liza with a Z], she was holding an entire 90-minute show with dancing and singing––and being charming with interstitial dialogue––and she's remarkable. And you can tell she's doing it every night!”

Rodriguez mentioned the Kander and Ebb song “Yes”, performed in the special, as one of her favorites of Minnelli’s vocal performances. She was quick to add to this assessment.

“I mean, ‘Maybe This Time’ is famous for a reason,” she said. “Or ‘But the World Goes ‘Round’. Actually, that might be my favorite.”

Despite living within the Liza Minnelli character for months in preparation for the role, Rodriguez still imagines dream roles she would love to see Minnelli take on.

“I would love to see her do something really ‘ingenue,’ like Marian the librarian,” she said, referencing the Music Man character. “I would love to see her bring some grit to a traditionally ‘nice’ performance like that. That role does have some grit, but it’s such a soprano role that it always gets relegated to an ingenue. So to put somebody like Liza in there would really give it some chutzpah.”

Though Rodriguez said she admires Minnelli’s grit, it is her infectious optimism she believes is ultimately what wins people over.

“She talked all the time about how she was born, had her picture in the paper, and never had any privacy,” she explained. “She knew that, and loved to go out and smile for the camera with her heels on, but then go home and relax. I think she's always really youthful and exuberant in her energy. She was excited all the time. She liked things. She was optimistic, and that’s what pulled her to so many things.”

Halston is available for streaming on Netflix.