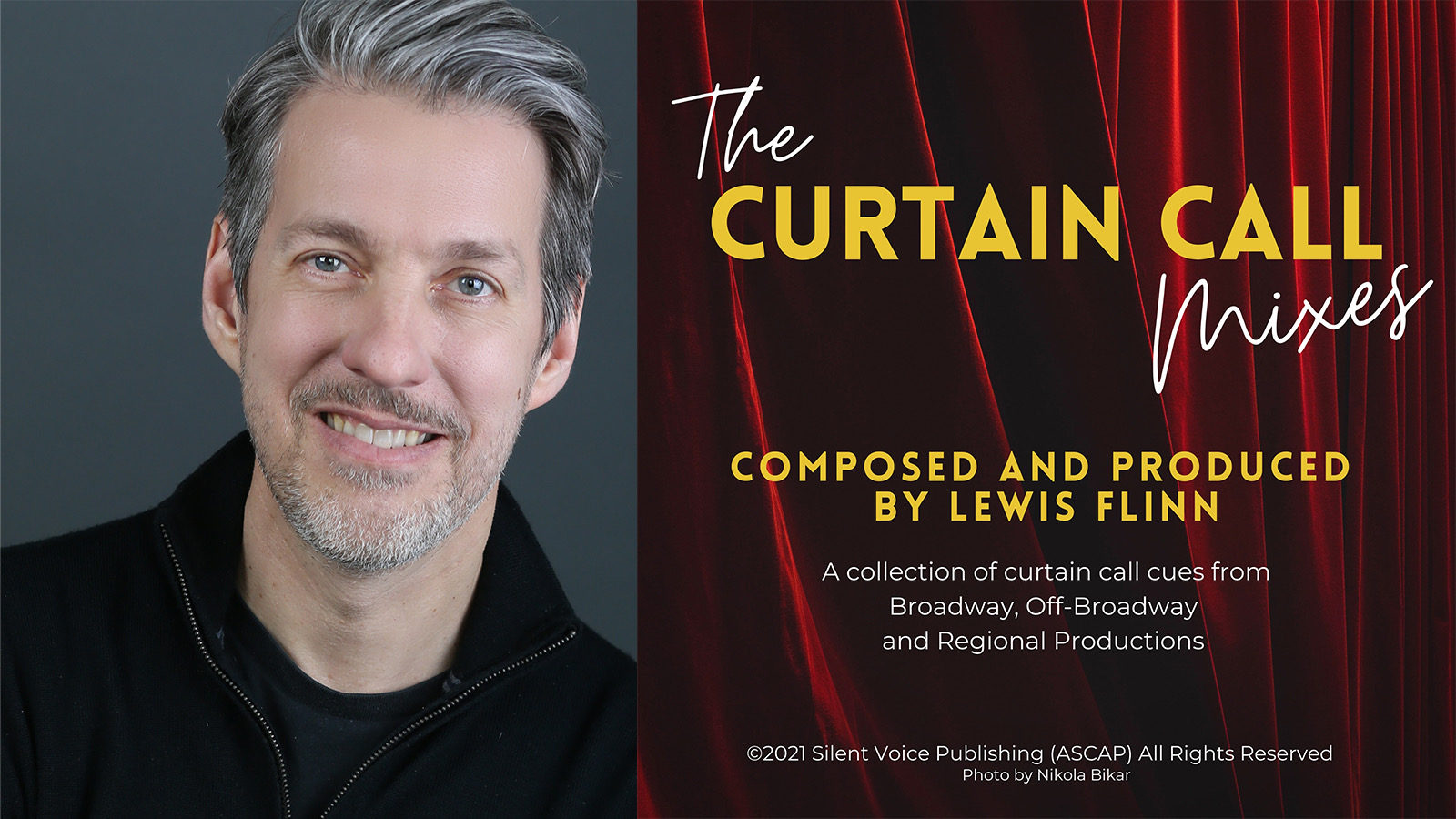 “The Curtain Call Mixes” is now available for streaming and download everywhere
By
Zack Reiser
No items found.
on
Category:
Features

One of my favorite moments in a show happens when the story is over, and the actors are taking their bows. Composer Lewis Flinn reflected on the joy that happens in that moment, and compiled an album of his favorite curtain call cues he has written. Theatrely caught up with Flinn to talk about what makes this album unique.‍

Theatrely: When did you first come up with the idea for this album?

Lewis Flinn: I was working on the scoring of the new film for Charles Bush called The Six Reel out here in Pennsylvania, this was December and January. And it came time to do the closing credits song and so we're talking with Charles and Carl Andress about the spirit of it. I've done several shows with Charles: The Divine Sister, Die Mommie Die, The Third Story. And Carl Andress as well. He was a director and said we were referencing some of these songs that I had written for for those shows and used the curtain calls. And then that got me thinking that's kind of a fun idea, and they were always my favorite cues from the plays that I had scored over the years and it was fun at that very dark time to be thinking about upbeat music rather than the stuff I've sort of been writing over the course of the year, which tended to be kind of somber, period appropriate music, you know, so that's where that's where it started. And for me, it was a walk down memory lane of going through all these shows and remembering the recording sessions and being in a live space with live people and just the collective enthusiasm from the cast and the audience at this moment, I thought it would be a good thing to put together.‍

What made you choose this specific list of shows?‍

Well, that the somber plays don't have upbeat curtain calls. So, you know, I went to comedies. Even though I was nominated for a score for a play for a Drama Desk, I didn't include that one on here because I just didn't think the cue for the curtain call specifically was all that inspired. But the other ones I just went through and thought well, this is an interesting juxtaposition with this one, all the tracks very stylistically different. But the running thread is they're just there's an element of joy to them and that's really what I wanted to the commonality of all of them.

I haven't really done anything during the pandemic except stare at my wall and call it a meditation practice. Most of everything was living in hard drive that I hadn't pulled off the shelf, so I guess there hadn't been a pandemic, I never would have thought like I had the time to go through and cull together this collection, there's 13 tracks on it, so I guess that was pandemic influence, just having the time to sort of reflect.‍

So all these are all these pulled from a live performance soundboard?‍

No, actually. So when I score a play how it works is the director will hire me to come in and write music for a play–although some of the there is a track curtain call from my musical list, Lysistrata Jones on the album, which I wrote specifically for the curtain call moment–and what that entails is I write original music for usually you have an opening cue, when the house goes to half to set the tone. And that's a shorter twenty five, thirty seconds. There'll be transitions between scenes to cover set changes. There'll be some underscore potentially, when I'm asked a lot to do Shakespeare and Moliere, where there's a dance and they need original music for a dance piece or a scripted song–Shakespeare has a lot of sonnets that were traditionally sung, so they want that set–so I'll do that. But the music is all very supportive. It's all prerecorded. But then once I got to the curtain call moment, that's where I always would pull out all the stops because I can be longer. So minute and a half to two minutes. And I treat it as a sort of thematic culmination of all the themes of the show and have some fun. I put in clapping effects for some of them and sometimes unfortunately everyone's clapping but they're not really listening. Bummer about that! But all the tracks are pre recorded, so like there's a track on here that the Cleveland Orchestra recorded for a production atof the Cleveland Playhouse, they hired the orchestra and they recorded the cues. So one of those tracks is on here, or in my New York studio I'll bring in different session players and they'll record the score.‍

I won't ask you if you have a favorite one on here, I feel like that's asking which one of your children is your favorite, but do you have any favorite moments on the album?‍

I love the Mondo Drama cue, it's just fun. That was a play my husband wrote, Douglas Carter Beane, and it was a fun Felliniesque score and some great musicians playing on it. That's a favorite of mine. Another favorite is from The Little Dog Laughed, which was the Broadway production, and so there's my top ones at the moment. But they're all so different, you know, one has a Middle Eastern feel, one's a New Age feel. That's the fun part for me, is the subject matter of the play defines the style of the music. So it's always something different depending on the setting. Like one of them is from The New York Idea, which was set in New York in the late 1800s. So that music has to fit into that world, which it does. And then I did a production of Comedy of Errors with Mark Browkaw and that's set in the Caribbean islands, so the music is evocative of that feel.‍

What are you looking forward to most when live theatre returns?‍

I'm looking forward to being in the rehearsal room with all of the actors sitting around and learning music and singing and no one worrying about their masks and six feet and just being able to be in the same physical space, something that we all took for granted. I want to go over and whisper something into the music director's ear or have a little powwow out in the hallway with people. That's what I miss the community of it.

“The Curtain Call Mixes” is now available for streaming and download everywhere.