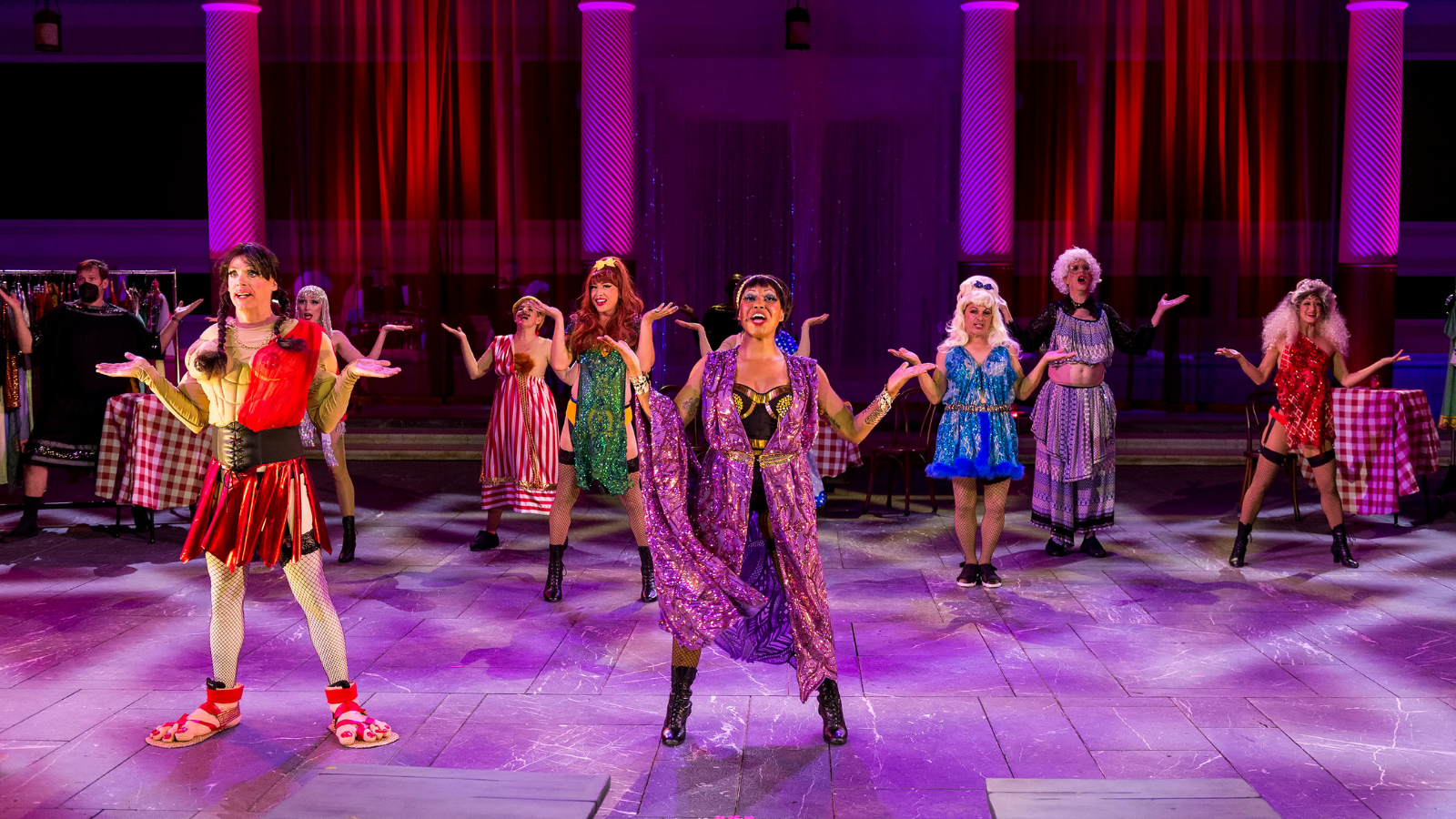 The Getty Villa, a Los Angeles museum of Greek and Roman antiquities, is not the first location one might think of when mounting a musical tribute to Liza Minnelli. When that musical, however, is based on Aristophanes’ Lysistrata and set in an amphitheater against the backdrop of an ancient Roman villa, everything falls into place.

Lysistrata was originally performed in 411 BC and tells the story of one brave woman’s attempt to end the Peloponnesian War by rallying all of the women of Athens to withhold sex from their fighting husbands until the men make peace. Already adapted many times over the years, notably as Broadway’s Lysistrata Jones in 2011, the show is a standard in the canon of Greek comedy.

Lizastrada, on the other hand, is brand new. Performed by the Troubadour Theater Company and featuring all-new lyrics to some of Kander and Ebb’s favorite classics, the cast makes sure you know that the show you’re watching is “Lizastrata with a Z, not Lysistrata with an S, ‘cause Lysistrata with an S goes sss not zzz.” This lyric, and all the rest, were penned by Matt Walker, in a style that can only be described as Forbidden Broadway meets Los Angeles.

Walker does triple duty—in addition to adapting the story and writing the lyrics, he directs the show and stars as the Emcee and Lampito, Lizastrata’s Spartan counterpart. He is joined in leading the cast by Cloie Wyatt Taylor, who plays Lizastrata. Her powerful vocals on songs like “Mein Herr,” “New York, New York,” and “Cabaret” punctuate scenes of ribald comedy with sincerity and humor. They are supported by a cast of players, L.T. Martinez, Rick Batalla, Suzanne Jolie, Amanda Pajer, Jess Coffman, Beth Kennedy, and Michael Faulkner, who each shine with side-splitting lines and scene-stealing physical comedy.

The script is timely, with references that range from 1970s-era Minnelli references to this year’s January 6th Capitol riot. Any audience member will be able to find a joke that was written specifically for them, and it will send them howling. There were some notable COVID jokes, but the Getty’s protocols made the outdoor show feel extremely safe. These jokes, however, paled in comparison to the bawdy humor that was displayed across the stage throughout the evening. Aristophanes would have loved the comedic vulgarity on stage; it felt perfectly transported from ancient Greece to the twenty-first century.

The show concluded with a spin on words from Shakespeare’s A Midsummer Night’s Dream. “If we shadows have offended,/ Think but this, and all is mended,/ That you have but gathered here,/ For the first live theatre in over a year.” This catharsis was felt throughout the auditorium, and everyone in attendance felt grateful not only to be at a show, but to be at a show as hilarious as this one.

“Lizastrata” plays at The Getty Villa through October 2, 2021. For more information, visit here.