Madeline Sayet Explores WHERE WE BELONG at Woolly Mammoth — Review 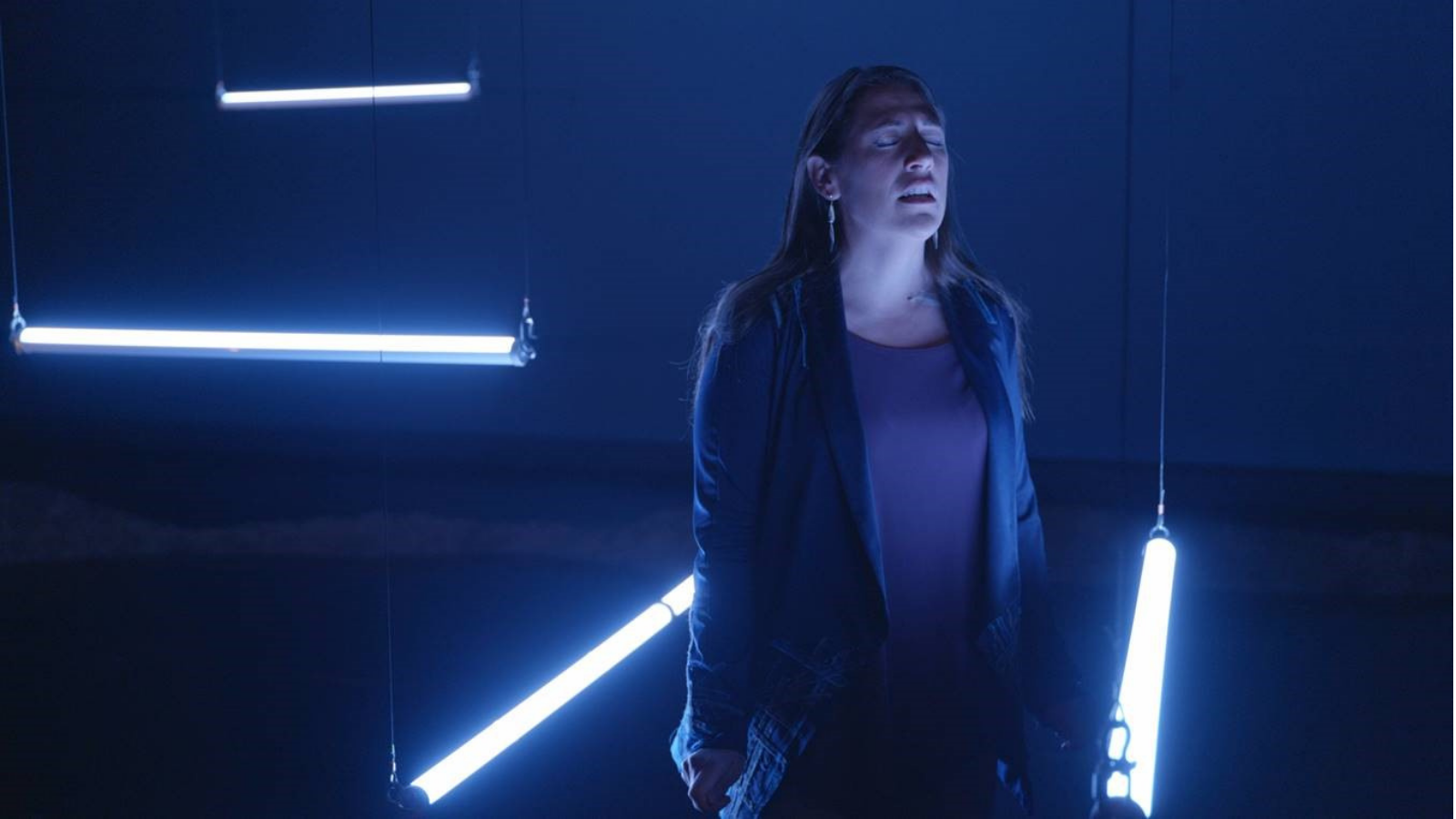 Madeline Sayet in Where We Belong | Photo: Jon Burklund (Zanni Productions)
By
Nathan Pugh
No items found.
on
Category:
Reviews

During the summer of 2020, I visited the Robert E. Lee statue in Richmond, VA. In the wake of the murders of George Floyd and Breonna Taylor, activists had transformed the site from a monument to the Confederacy into a piece of protest art: a communal space of graffiti art, gardens, and voting booths. To me, the space revealed many peoples’ deep desire to belong somewhere, even on land tarnished by history. To reclaim America, saying “This country belongs to us, too.”

For many indigenous peoples, the idea of reclaiming America is a difficult one. How can you take pride in a land that was forcibly stolen? But the desire to belong is a seductive one and reclaiming what wasn’t supposed to be yours can feel liberating. It’s this tension between pain and pride that animates Madeline Sayet’s one-woman filmed show Where We Belong, now streaming through Washington D.C.’s Woolly Mammoth Theatre Company and Folger Shakespeare Library. Over the course of 80 minutes, Sayet gracefully explores the places she has tried to reclaim as her own—Shakespeare’s words, her Mohegan identity, her ancestors—and ultimately asks why we need to belong somewhere at all.

The show unfolds as a series of autobiographical vignettes connected by the themes of borders and crossings. We learn that even though Sayet’s family is Mohegan (meaning “wolf people”), her middle name Fielding comes after Fidelia Fielding, A.K.A. Jeets Bodernasha, A.K.A. Flying Bird—the last fluent speaker of the Mohegan language. From an early age, she was trained to inherit her people’s survival while also taking flight, traveling great distances like her namesake.

Sayet’s dedication to language helps her escape into the words of Shakespeare, becoming anybody she wants to be in a theater. After receiving acclaim for her anti-colonial staging of The Tempest, Sayet travels to England to pursue a PhD, studying Shakespeare’s relationship to North American indigeneity. But while abroad, Sayet becomes increasingly disconnected to her roots and struggles with finding her full self in Shakespeare’s plays.

Sayet is in full command of holding an audience’s attention even through the film medium. When she stages discussions between herself and other people, Sayet showcases her wide range of accents—posh English academic, ultra-concerned mother, valley girl—as well as her ability to code-switch instantaneously. This skill also allows her to vacillate between comedy and tragedy. We watch Sayet’s face widen with glee as she describes the accomplishments of her Mohegan ancestors Mahomet Weyonomon and Occom, who also traveled to England. But we also see her entire demeanor quiver when she recounts the ways in which her ancestors were decimated by genocide. That she’s able to convey a dense amount of history while always keeping the audience intrigued is a testament to Sayet’s finesse as a playwright and performer.

Director Mei Ann Teo frames Sayet in a space still uniquely theatrical. The set, only a winding trail of soil, is abstract enough to become a river, a stream of air, a skyline, and ashes depending on the scene. The lights, spiraling above the stage and occasionally lowered down, are particularly disturbing when detailing a famous museum’s colonial archive. The LED’s sharp angles create an atmosphere both haunting and sterile.

Teo’s direction is felt even more when they use language of film to enhance the production. Wide shots show Sayet against the cavernous backdrop of the theater when she travels; bird’s-eye view shots reflect Sayet’s wild imagination; rapid-fire editing and kinetic lighting help the audience feel the disorientation Sayet experiences when confronting the casual racism of her peers. I wish I could’ve seen more of these techniques throughout the show. The rupture of film language paralleled Sayet’s grief over losing her Mohegan language, shifting the show’s prose into moments of elegiac poetry.

As for Shakespeare? Sayet doesn’t arrive at any definitive conclusions on how to handle the playwright’s legacy. When she questions whether or not people would have cared for her Mohegan words if not filtered through Caliban, I couldn’t help but wonder if the Folger Shakespeare Library would have produced this show if it had never mentioned Shakespeare. Critiquing the Bard is still giving attention to the Bard, after all.

Sayet is inheriting a long struggle of BIPOC interacting with Shakespeare’s work. In 1996, playwright August Wilson delivered “The Ground on Which I Stand,” a speech in which he condemned colorblind casting (like Black productions of Shakespeare plays) for erasing actual Black culture. Initially, Sayet’s work seems to only meet Wilson’s theory halfway. She’s still working with Shakespeare, but actively foregrounding race within the plays, “indigenizing” the work. It’s the same “color-conscious” casting trend that’s grown out of a post-Hamilton theatre landscape: keep the stories the same, but reclaim them by putting BIPOC center-stage.

Eventually for Sayet, this indigenizing work can only go so far. She grows exhausted of one white man’s hagiography, realizing there are limits to the project of making Shakespeare her own. Don’t get it twisted—the desire to reclaim colonizers, to find beauty in their wreckage, is understandable. Colonization is an ugly legacy all Americans must unwillingly hold. But for Sayet, transforming horrendous histories into beautiful reclamations might not be enough. It might not be enough for any of us.

Hopefully, one day the Robert E. Lee statue will be taken down, and something new will take its place. This site of beautiful reclamation will have to give way to something else: creation.

Unlike August Wilson, whose speech is predicated on Black ownership of American ground, Madeline Sayet isn’t concerned with finding a specific plot of earth for herself. When Sayet described a flock of birds soaring through the air, I was reminded some words from the novel There There by Cheyenne and Arapaho writer Tommy Orange. Like Sayet, Orange refutes the idea of belonging to one place, stating “Being Indian has never been about returning to the land. The land is everywhere or nowhere.” ‍

Where We Belong dares both its indigenous and non-indigenous audiences alike to imagine a world untethered from trying to reclaim the past. It will be strange, admitting that a painful history can never be changed. The world will feel like the empty theater Sayet stares at in wonder towards the end of the play, a space that could be nowhere, and could also be anywhere.

“Where We Belong” streams on-demand through July 11. For tickets and more information, visit here.