Mansa Ra Builds Multi-Generational Bridges in ...WHAT THE END WILL BE 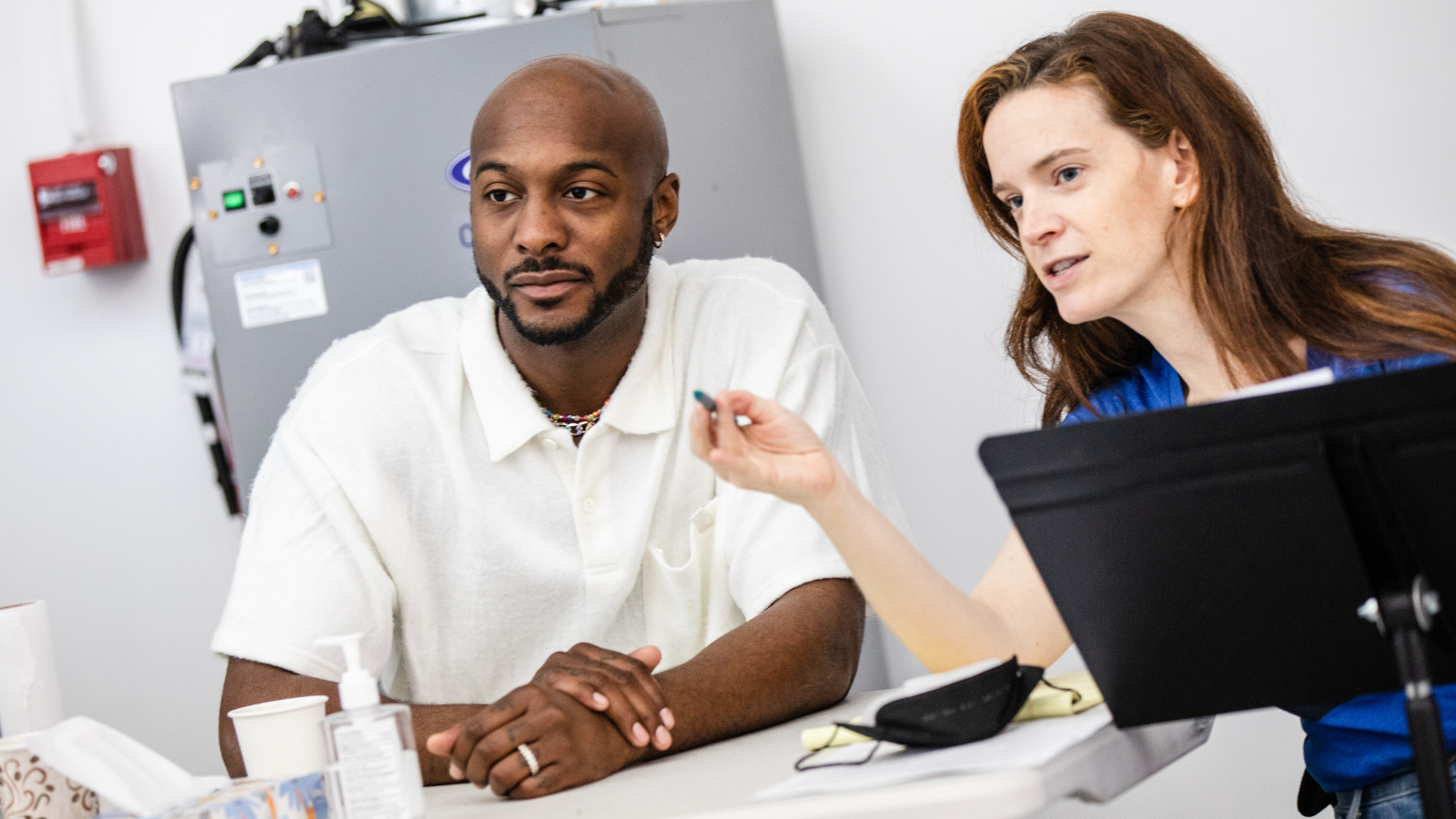 Roundabout’s latest, …what the end will be is like a beautiful scrapbook, or maybe a mid-2000s Facebook photo album. It is a glimpse into an incredibly difficult decision and an equally trying conversation, yet it finds beauty in unexpected moments. Three generations, a few significant others, and one really expensive couch later, it’s as though I’ve spent the day with the Kennedy family (Bartholomew, Maxwell, and Tony, that is.)

Theatrely spoke to playwright Mansa Ra about the process for writing a show that spans multiple generations, how to include the most current pop culture references in a script, and even heard a bit of the show’s backstage playlist.

‍This interview has been edited for clarity and length.‍

‍…what the end will be was programmed before the shutdown, and then we had this “pause.” Did anything about the script or your relationship to it change in that time period?

‍Absolutely. The play is about how to have a good death. I think initially it was really a shout out to those we’ve lost from the ongoing AIDS epidemic. And then through the pandemic, we’ve lost a million Americans to COVID-19. I think it’s just gotten deeper and more relevant after, as you said, The Great Pause.

‍In this show, we meet three unique generations of men. How do you go about writing from a perspective, and a memory base, of a completely different generation?‍

I love talking to my grandparents. I’m the baby of the family, so for my whole life, I’ve gotten the opportunity to sit at the feet of my grandparents and uncles and aunts and listen to their stories and their point of view and their perspective. Now that I’m an adult we can have some real dialogue. We talk intergenerationally quite a bit. So to put that on stage, maybe it's a little embarrassing sometimes, but [it’s] a lot of fun to be able to have these dialogues. And then, of course, the actors help a great deal that they’re bringing their own perspective and experiences to it as well. Once you have a cast as strong as ours, it becomes even easier.

‍Of course. So you’ve been collecting all of these stories through time, fitting them all into one script, which I’m sure is very difficult to condense?

‍Oh, absolutely. Especially because you have six characters and they all have such rich lives. It’s hard to decide what actually goes on stage because in my head, each of these characters leave the house, have their own lives, and are doing stuff, you know?

‍Yeah, you have to really zoom in and focus on each.

‍There are a lot of pop culture references in the show, with jokes about The Real Housewives..., Drake, and more. Not only do you have multiple generations, you're bringing really contemporary things into the conversation as well. Did you include your personal favorites in these references?‍

First of all, I love The Real Housewives. [laughs] But it is really fun. They’re talking about things like tattoos and Afrofuturism, but these are contemporary terms that the oldest character really doesn’t have as much access to. It’s just a good time having the opportunity to be like, okay, here are some of my favorite things. What would my grandpa say about it? And then what will my uncle say about that? And we don’t all agree.

‍To go with that, what kind of things were you reading, watching, or listening to that might accompany the script and production?

‍I have a whole playlist, literally, that I shared, not only the cast, but the creative team and the crew as well. This play is about Black queer guys. So I have a very Black queer playlist. We have some Luther Vandross on there. We have “I’m Coming Out” by Diana Ross, “One Sweet Day” by Mariah Carey. Just some good songs to get us into a Black space, into a queer space, [with] the same heartbeat. As far as plays go, I spent a lot of time with ‘Night Mother by Marsha Norman, which is kind of similarly structured about a person deciding to die and what that does to the home that she’s been living in. I think Marsha Norman did just a beautiful job with that piece.

‍It’s so interesting to think about how the concept of generations is so universal, in every decade, every location. Everyone’s going to have some experience with that.

‍I also want to note that this is not your first Roundabout production or your first time working with [director] Margot Bordelon. Talk to me about how that relationship changes over time.‍

We’re older! [laughs] It’s funny because I wrote Too Heavy For Your Pocket in grad school and Margo directed my thesis. So this is our third production working together...well, I guess fourth! We did Too Heavy... in Atlanta, Georgia, at the Alliance Theater and we did it here at the Roundabout. So this is our fourth production together, and we are much older. It’s funny, it’s kind of like, “oh man, we’re not kids anymore.” But it is still the same kind of creative mission. I feel like Margot and I really are true-born storytellers, so we both want to put a strong story on stage, her with the visuals and myself with the words. It’s a good pair.

‍Can you elaborate on that? What do you consider to be your creative mission?‍

You know, I think of myself as a “griot,” which [describes] these people who talk about history to inform the present. That’s one way to put it. It’s an interesting thing because storytelling is—like, everybody tells a story. You’re going to have a call with your brother or sister today and you’re going to tell stories. It’s part of how humans communicate. I think the job with the griot is that it’s a little bit more specific like why are you telling the story? What are you hoping that the 200 people who come to the show tonight get? And tomorrow night? And the night after that? What is the pulse of storytelling? It’s a calling, I guess.

‍You’ve previously mentioned the desire to get multiple generations into one room, not necessarily to disagree, but to just kind of experience each other’s company and to chat. What would you tell the generations before you about this play, this process, or just where you are at now?

‍I think that previous generations of Black people and previous generations of queer people have had to exist with a degree of fear that I think in 2022 we can release. I think that for so many people it’s just ingrained to be a little bit afraid of straight people or a little bit afraid of white people. I think if I got an opportunity to just be like, “hey, y’all, we can just be ourselves and not give any fucks. And it’s okay because… we’re free now.” Like freedom is really a decision in a way that before, I think there was an imposition where people were forced to stay in the closet and people were forced to take their sexuality incredibly seriously because of the ongoing AIDS epidemic. And then people still face racism in the workplace today. However, I think that there is a degree of personal freedom that I get to enjoy, that [previous] generations [didn’t.] It’s really okay to be yourself in 2022. It is wonderful to be authentic.

…what the end will be is now playing at Roundabout Theatre Company. For dates, tickets, and more information, visit Roundabout’s site here.