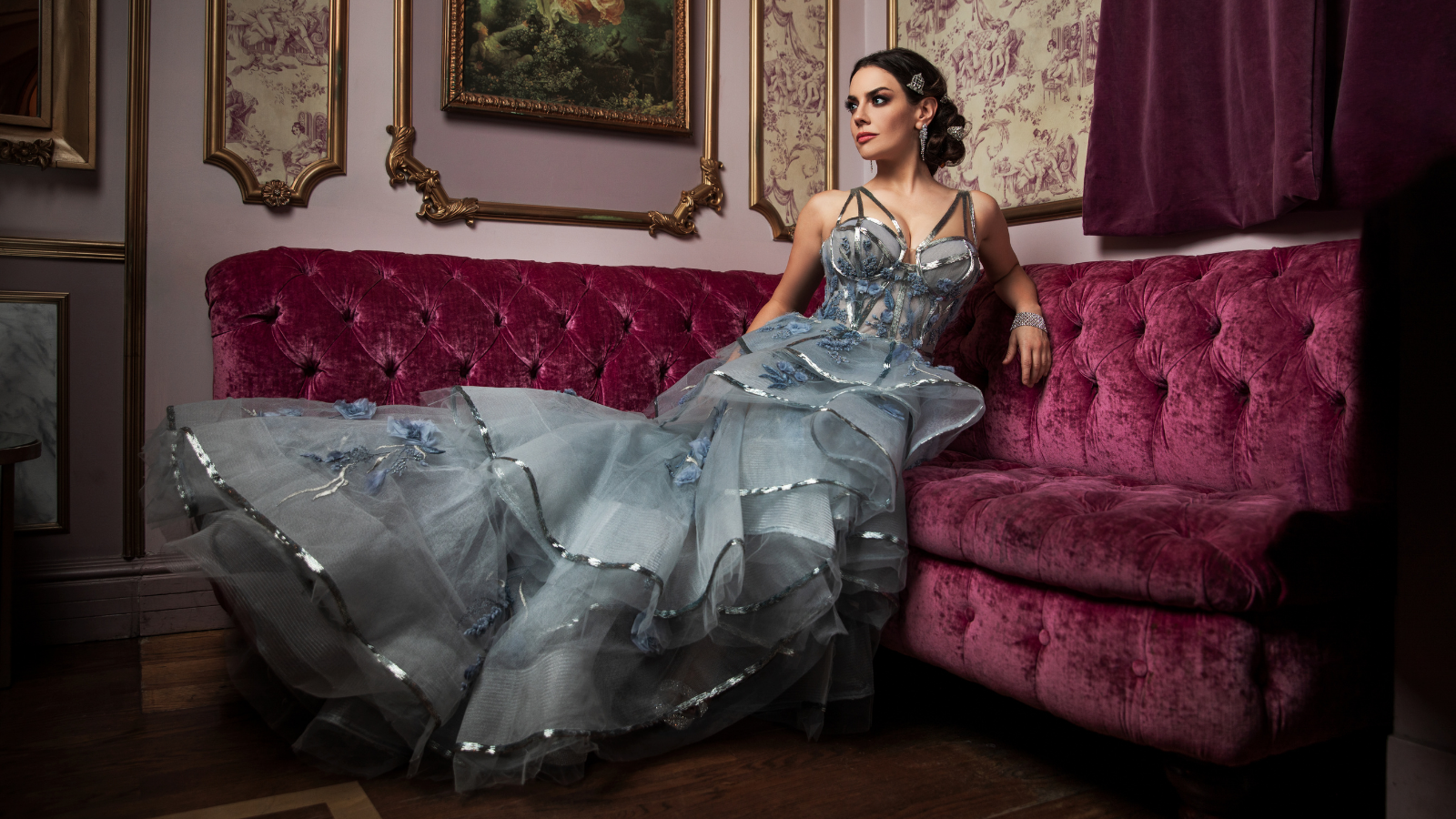 As Broadway’s longest running show, many would argue that Phantom of the Opera is intrinsic to New York City theatre culture. When the curtain of the Majestic Theatre finally rose again on October 22nd, 2021, Senator Chuck Schumer, onstage with Andrew Lloyd Webber and Cameron Mackintosh, declared that “Broadway isn’t back until Phantom is back.” Those words were met with a roaring response from the packed-house, and a vital part of our world was alive once again. Not only had Phantom returned, it had reawakened with a fresh air of rejuvenation in its 33rd year. The feisty, confident Christine to usher in this new era for Phantom is “phan”-favorite Meghan Picerno, whose life has been a full-circle whirlwind of Phantom since 2017, when she took on the role of Christine in the Love Never Dies National Tour, before joining the Phantom of the Opera World Tour as Christine in 2019.

A dazzling coloratura soprano, Picerno first appeared onstage in operas such as Die Zauberflöte (Lincoln Center, Carnegie Hall) but eventually made the transition into theatre when she was cast in the Hal Prince-directed Candide at New York City Opera. Surprisingly, her background in opera sets her apart from the status quo of Broadway Christines, whose repertoires are often rooted in musical theatre. With extensive experience singing many of the scores that a real-life Christine Daaé would have, both Picerno’s voice and perspective give a stunning sense of realism to her Christine.

Fans had rallied for Picerno to join the Broadway cast for years, unaware their wishes would finally be granted just four months before the onset of the COVID-19 pandemic. As Phantom and the world around it shut down, Picerno and her cast members were faced initially with the challenge of navigating the pandemic as artists in isolation, and eventually in 2021, reuniting to pick back up one of Broadway’s most iconic shows after a year-and-a-half-long absence broke a 32-year-streak of performances. It was a great responsibility, but the past five years had left Picerno more than prepared.

Although Phantom’s original director, Hal Prince, often reminded her that Christine in Phantom does not know her future the way that Picerno does, she still carried some wisdom with her into the role. “Living her future first, knowing who she becomes…not everyone has the seeds to blossom into such a strong powerful woman, mother, world-class-diva. So, when I went back in time to play my younger self, I knew those seeds were always there.”

A common criticism of Phantom is often a reduction of Christine’s character: she is too naive, too docile, too weak. Picerno leaves less room for this commentary now, as she not only knows the strength that lies within her character, but when Phantom reopened, she was encouraged by the creative team to bring it out even more than her instincts compelled her to. “The director of Phantom and I had a really big chat, and I said, ‘I don’t think she’s just a zombie, I don’t think that she doesn’t know what’s happening…I think she willingly wants to live in this fantasy.’”

Picerno’s take on Christine echoes what many fans have seen in her for years, and what Phantom’s disprovers may have felt was missing from her character all this time. Picerno’s portrayal answers the previously unanswered questions of Phantom: why is Christine so drawn to the Phantom, even after she knows of his deceit and darkness? When all the smoke and mirrors have vanished, what is it that pulls her to him?

“I find her extremely intelligent. I think that, as the Phantom is a genius, she’s also a genius. That’s why she’s in her own little world, you know? People who are very intelligent, they function on a different wavelength, which is why I think the Phantom and her attract each other. All of her experiences, she dives in, full-on. She wants to follow him, even though it’s dangerous. She wants these feelings to overcome her, but she wishes for the best…she still needs that fresh naïveté, especially in Act I, but by the Final Lair, we see the woman she’s going to become.”

Picerno’s interpretation of Christine is certainly reflected in some minor – and yet, nonetheless significant – changes to the show. Fans were quick to notice upon reopening that something felt inexplicably, exhilaratingly different with the climatic scene, Point of No Return, where Christine is pressured into using herself as a pawn to entrap the Phantom during the premiere of his opera, Don Juan Triumphant. Something feels more electric, more empowered, as Picerno’s Christine approaches the Phantom – hidden in a black hooded cloak– to rip away his disguise, revealing him to the audience and those hunting him. “It was a pretty significant change and, as a feisty strong woman myself, I loved it,” Picerno confirmed, when asked if something really was different. “Instead of Christine not knowing it’s the Phantom until the very end of the song and him kind of struggling to pull her, she already knows it’s him, when she crosses the stage and starts to sing. When she says the words, ‘I’ve decided, decided,’ even though she’s the character onstage, it’s actually Christine saying: ‘I’ve made up my mind. I know it’s you, and I want to go through with this.’ And so, she actually becomes the one who’s seducing him,” Picerno explains.

Handing the power back to Christine in this way, some might worry, could strip away the anxiety and tension that the scene is iconic for, which mirrors the score’s tight slide of violins and its anticipatory pace. But, rest assured: it’s replaced with a daunting, equally evocative energy, as we now watch a subliminal exchange unfold between Christine and the Phantom through their respective Don Juan characters. “In the end, when she removes his hood, what that is symbolizing is: ‘I will be with you, but you need to be you. You can’t keep hiding. Regardless of all the terrible things that have happened, I will choose you, but you have to be you, and let me see you for who you really are.’” Picerno notes that much of this concept was developed alongside producer Cameron Mackintosh, who aided her in ensuring that there were still traces of Christine’s original apprehensiveness, which greatly contributes to the suspense of the scene. “I remember Cameron was like, ‘she needs to not stalk him,’ so I had to find the balance of still being a little nervous – well, not nervous, hesitant – because she doesn’t know how the Phantom is going to react.” Of course, the Phantom reacts as he always does: chaotically, and the Final Lair scene ensues as it always has, on the heels of this moment of newfound dauntlessness for Christine.

Although few visible changes were actually made to the scene’s blocking, the redirected thought process alone puts a wildly different spin on the scene, but it’s nonetheless an overdue perspective, as the Broadway community has long called for more independent and empowered female characters onstage, particularly in period pieces. With Picerno donning the iconic white lace robe and brunette curls, Christine is able to come into her own in a way she never has before on Broadway.

Now, as she departs from a role that on one hand, she has only played for nine months between 2019 and 2021, and on the other hand, has been a journey dating all the way back to 2017, it’s clear Picerno has made a mark on Phantom that is arguably worthy of icon-status by resurrecting the show with a craftful metamorphosis of character. Of course, this was not an independent effort. The entire cast, crew, and creative team of Phantom played an integral role in seeing Phantom with brand new eyes, so that when it reopened, it had a new life to it. Still, had this fresh perspective not occurred, Phantom surely would still have retained its cult following, and Picerno can list the reasons why with as much fondness as a devoted fan would: “[There’s an] intense impact with people understanding this story of love, abandonment, and heartbreak…a person that has become something that society made them because they don’t fit in. All of these universal messages are coupled with an incredible score that is a combination of rock and musical theatre and opera. It speaks to everyone,” she remarks. “There’s something about this world. It’s dark, it’s beautiful, seductive, romantic…there’s a story of someone who is completely broken, and someone who can love them regardless. We all know what these feelings are like. It’s a generational show that keeps on going because it’s very human, actually. It’s beautiful.”

Picerno embarks on her final journey into the Phantom’s lair on Sunday, January 23rd at 5PM. For tickets and more information, visit here.