ON SUGARLAND, an Epic Narrative — Review 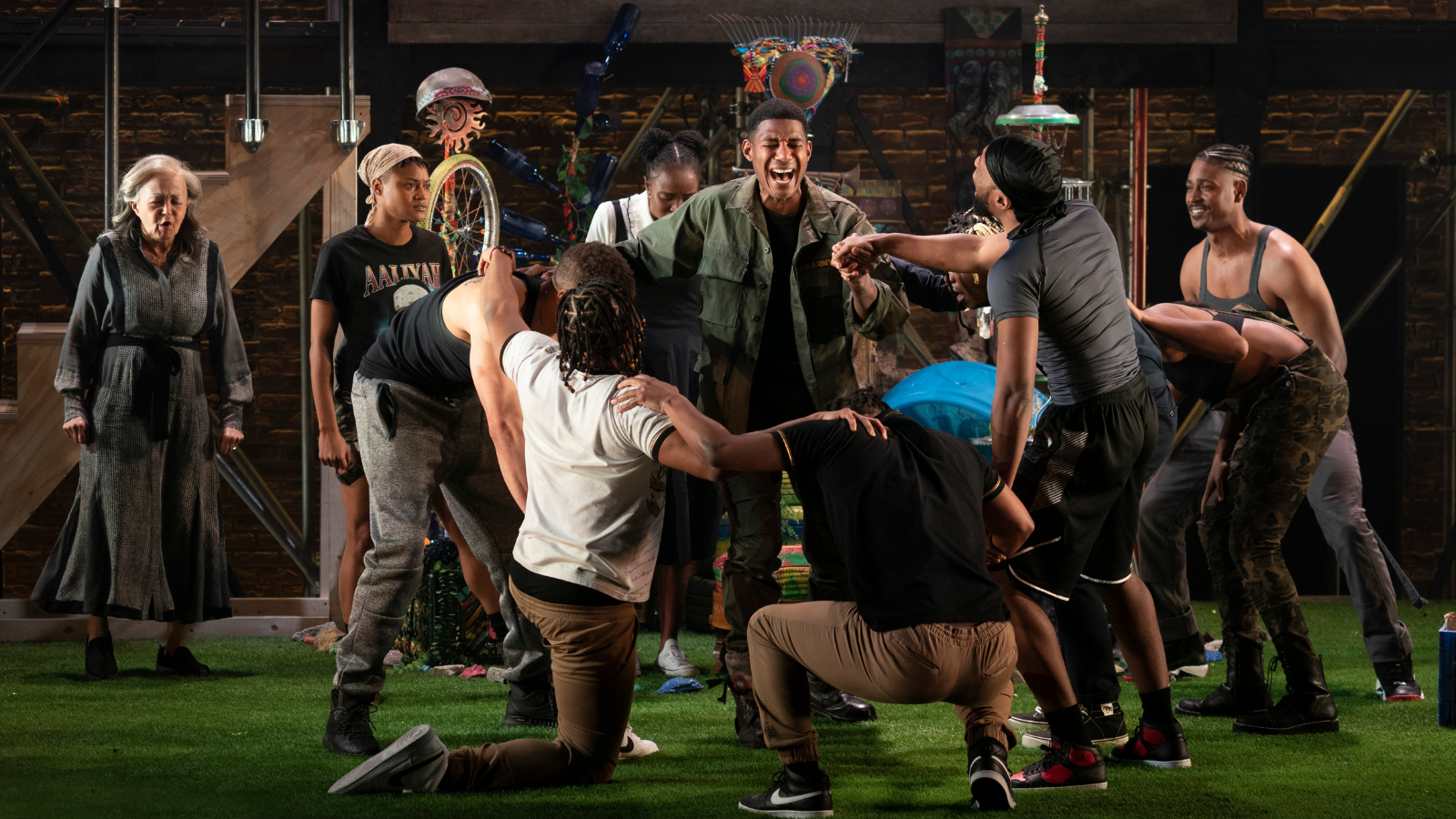 The company of On Sugarland | Photo: Joan Marcus

Some people holler to bring attention to themselves; others to rage against the machine. The characters of Aleshea Harris’ latest epic narrative, On Sugarland, holler to purge themselves of grief during funeral homegoings for their fallen soldiers.

But catharsis never lands in Sugarland’s never ending parade of death. It can’t when boys are called to sacrifice themselves to war as soon as they come of age. As one character notes, “Calling it Sugarland don’t make it sweet.” So who is all of their hollering for?

In a blistering critique of how the military industrial complex preys upon Black communities with false promises of American security and benefits, Harris uses West African storytelling traditions to lay bare that the gods who demand you holler, but fail to honor you back, are hardly worthy of worship.

She sets this up by interweaving a series of complex relationships that have arisen within Sugarland ― a feeder community to a military base, somewhere in the South, where, unlike the fantasies in Langston Hughes’ poem, dreams aren’t given the time to defer or explode.

The play’s action revolves around a shrine to its fallen idols, which has been decorated with dog tags, trinkets, and memorabilia of those who never had a chance.

Standing in the background of their communal worship space is Adam Rigg’s perfectly realized housing structure ― a ramshackle set of campers that have been parked atop stilts, and that look as if they will topple over at any given moment. The entire structure is encircled by a railroad as if to punctuate that this is the other side of the tracks.

It is also the home of Sadie (Kiki Layne), a 14 year old girl ― who, despite her inability to speak, is able to commune with every dead woman in her family, except for her recently departed mother ― and her ever-drunk aunt Odella (Adeola Rose), who longs for her grief to be acknowledged; as well a chorus of bullying kids who taunt anyone with a lick of aspirations. When these kids speak, they do so with one inescapable sneering voice that reminds their victims that dreaming is for losers.

On the more experienced, though no wiser, side of the fence, there is Evelyn (Stephanie Berry), a vain glorious 60 year old widow with the wit and poise of Josephine Premise ― who dresses as if she were attending a royal coronation thanks to costumes by Qween Jean who has been in radiant form all season, regardless of the circumstances ― and her folksy, frumpy, and no-nonsense sister, Tisha (Lizan Mitchell). Their constant comedic bickering sets the scene for how the unfortunate survivors of Sugarland cope: in obsequious worship to their departed or to their own delusions of grandeur.

Their hijinks establish the community norms of Sugarland ― where there seems to be a party of gorgeous music (composed by Starr Busby) and rah-rah, twerk-du-soleil dancing (choreographed by Raja Feather Kelly) every night.

They also frame the play’s central relationship between Saul Greenwood (Billy Eugene Jones) ― a staff sergeant who, after suffering a grievous foot injury, was dishonorably discharged ― and his 17 year old son, Addis (Caleb Eberdardt), a junior cadet who wants to be the warrior that he believes his father to be. Unfortunately for Addis, because he is “special” (intellectually disabled), he is unable to serve.

Saul takes pain medicine to soothe the wound in his rotting foot, which, in a poetic twist, bleeds perpetually. His medicine causes him to forget the cause of his injury as well as the fact that the military service that he spends his days exhorting others to praise, all but betrayed him. Saul leads the communal hollering while hyping Addis up on the “warrior’s life.” Addis is mesmerized by those ideals and fanatically plays at soldiering by attending to his father’s commands and guarding the perimeter of Sugarland.

As played by Jones, Saul is a jubilant huckster who has come to believe his own lies. Though not always mentally present, he is worshiped by his son and longed for by Odella, but in love with her sister who died due to unknown circumstances. The tragedy is that Saul knows what caused her death, but continues to bleed in denial of that truth, even as he attempts to re-enlist on a daily basis.

Odella finds momentary comfort in her bottle, while pining over Saul, and humoring Addis, who swears that he loves her. Addis attempts to enlist in a bid to prove that he is worthy of his father’s status and Odella’s love.

Addis’ dreams of serving are constantly dashed, even as his less devoted peers are called to replenish the lines. Through Eberdardt, Addis becomes a frustrated Peter Pan, blessed with a beautiful voice and will that can rend steel in twain, but unable to meet the needs of his own desires. Though guileless, there is also a menace of thwarted, toxic masculinity to him.

All of this comes to a head after the far-off war finally calls Saul back in. The battle front is so desperate that they will even take a maimed man with drug dependencies. His upcoming departure unleashes a furious bomb that breaks the never ending cyle of Sugarland’s tribute to death.

Though On Sugarland functions according to the narrative cycle of African folklore ― Mami Wata or The Woman with Two Skins ― American audiences will likely equate the work to Greek tragedies. This is incorrect; what Harris and director Whitney White have concocted for audiences at New York Theatre Workshop is much more complex than that. Rather than tell a straight forward story, they allow momentous episodes to layer over each other as if they were weaving a quilt.

Rather than expect a straight forward story, it is important to note that even though each character affirms On Sugarland’s themes about the American system’s hunger for Black life, they are not slaves to it; rather they fight for their right to self-determination, even when it leads to their own ruin.

There is much sadness in On Sugarland, but it eschews obscene tragedy. Though the characters live on a land that has been sweetened with blood, they all speak and move with irresistible humor that makes the show’s two and a half hour run time fly by. And all of the superlatives to the award-worthy cast, particularly Eberhardt, Jones, and Berry.

It is important to note that while there is much to see this season, what Harris and White created is the future of theatre that Americans have been clamoring for, for decades. Some people will find On Sugarland challenging; but when one has been spoiled on a diet of 100 year old revivals and derivative hot takes on mediocrity, the challenge is not only worthy, it is essential.

On Sugarland is now in performance at New York Theatre Workshop through March 20, 2022. For tickets and more information, visit here.