Othello Speaks to and Undermines Reality in RED VELVET – Review 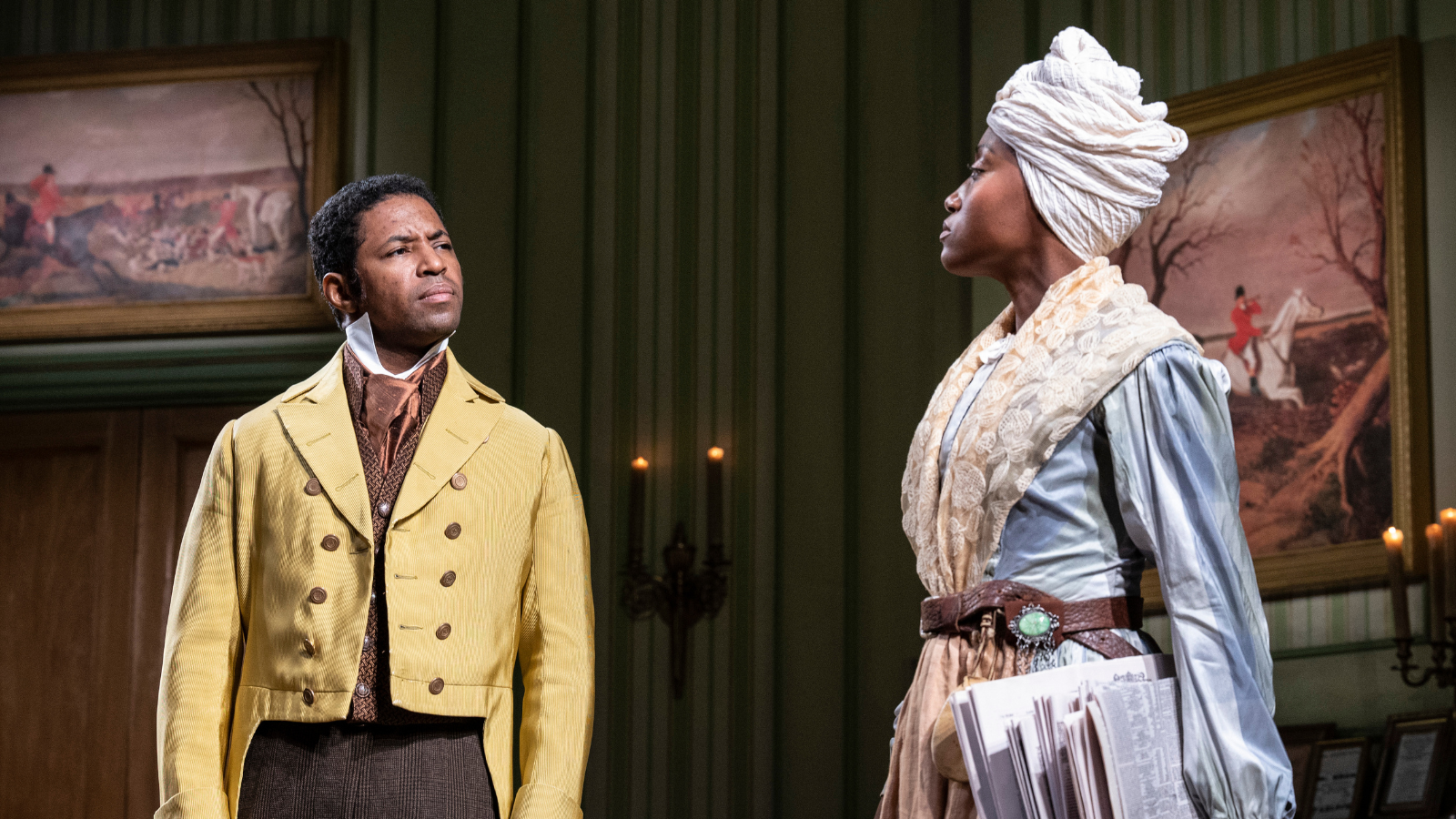 At the end of William Shakespeare’s Othello, the titular character has murdered his wife Desdemona in a jealous rage. Right before committing suicide, Othello asks his companions (and the audience) to reframe his story, stating, “When you shall these unlucky deeds relate, / Speak of me as I am. Nothing extenuate, / Nor set down aught in malice. Then must you speak / Of one that loved not wisely, but too well.” While these words carry great meaning in Shakespeare’s play, I also think of them in a metatheatrical context too. Othello is such a rich role for any actor to play; such a complicated figure is easy to love “not wisely, but too well.”

But the murky complexity of the character often can have disastrous effects for the Black actors. If an actor embodies Othello too closely, if an actor loves Othello “too well,” that actor risks the audience perceiving them as Othello. With reality and fiction blurred, Shakespeare’s potentially racist depiction of a Black man can sometimes transfer to the actor, and unlucky deeds can quickly follow.

The dangers of loving Othello “not wisely, but too well” are explored with compassion, adroitness, and tragic irony in Lolita Chakrabarti’s Red Velvet, now playing at Washington, D.C.’s Shakespeare Theatre Company. On the outside, Red Velvet depicts the journey of Ira Aldridge, a trailblazing actor who, in 1833, was the first Black man to play Othello in London. As a result, the play explores the plight of any Black man trying to bring his interiority to a role that others treat with feigned acceptance or outright disdain. Even though Red Velvet was first produced in 2012, the play feels hauntingly timely and astonishingly sharp.

‍Red Velvet opens in 1867, with an aging Aldridge (Amari Cheatom) preparing to perform King Lear in Poland. An inquisitive journalist Halina Wozniak (played in my performance by an incredible understudy, Kimberly Gilbert) enters and soon questions why Aldridge has been forced to tour his performances of Shakespeare away from London for so long. This naturally leads playwright Chakrabarti to rewind time to when Aldridge was first cast as Othello, and the rest of the show is performed like a painful memory.

Back in 1833, we’re introduced to the white theatre world grappling with social change in the form of England’s incoming abolition of slavery. Some members of an ensemble performing Othello, like Henry Forrester (Samuel Adams) seem to openly welcome these changes. Others, like Bernard Warde (David Bishins) are more hesitant; Warde even states, “This concept of equality and freedom, it’s a fad, impossible to achieve because there’ll always be those of us who lead and those who follow.”

In any case, this 19th century cast of Othello is nervous because their leading player has taken ill. Charles Kean (Jaye Ayres-Brown, excellent) is an entitled snob who assumes he’ll take on the leading role, since it was previously his father’s. Pierre Laporte (Michael Glenn), however, has other plans, and soon introduces Aldridge to the ensemble, much to the cast’s shock, and even disgust.

The beauty of Chakrabarti’s play is how it fluidly moves between genres, and director Jade King Carroll transitions this production between comedy and drama seamlessly. There are times when Red Velvet hones in as a character study of Aldridge, a man with a fierce, uncompromising confidence in himself that slowly gets chipped away as the world denies him his dream of performing Shakespeare. Working in the tradition of Shakespeare, Chakrabarti also has a skilled ear and a cutting wit. Thus, she dexterously unpacks the follies and violences of white discomfort (early scenes play out like a 19th century version of Guess Who’s Coming to Dinner), and Chakrabarti also throws in a few metatheatrical nods at the audience to hold us accountable, too.

In Ira Aldridge, Chakrabarti has also crafted a monumental role for an actor; Aldrige is a character resonating with and even rivaling Shakespeare’s Othello. On the page, Aldrige is a vertiginous swirl of theatrical flair, stifled pain, and incessant yearning. On the stage, Amari Cheatom lets us feel like we’re falling into this vertiginous swirl in the same way that Aldridge is falling into Othello. Cheatom gives a masterclass in acting, allowing us to generously feel Aldrige’s pride and pain with every furrowed brow and searching glance.

While some of Cheatom’s male counterparts in this production don’t leave as quite a big impression in their smaller roles, the women actors in Red Velvet also command attention in the same way that Cheatom does. As Ellen Tree, the actress playing Desdemona to Aldridge’s Othello, Emily DeForest gives a fascinating performance as a woman open to change but still psychologically bound to societal convention. And as the Jamaican servant Connie, Shannon Dorsey offers a jolting and necessary conversation about seeking acceptance into white spaces.

The sheer strength of Dorsey’s performance, despite being forced into silence for much of the show, made me want to explore Connie’s life in a way that Red Velvet never does. Somewhere within Chakrabarti’s script aches another play that exclusively follows the Black characters surrounding this production of Othello. This play might look like a Black, metatheatrical version of Rosencrantz and Guildenstern are Dead. Or this play might stage enslaved characters as in Branden Jacobs-Jenkins’s An Octoroon, commenting on and resisting their show’s melodrama. But Chakrabarti’s adherence to realism (except in a few key moments, aided by Yuki Nakase Link’s lighting design) mostly stops this stranger, more experimental show from coming through.

Still, Red Velvet fulfills its goal of bringing a historical figure to brilliant life, and drawing trenchant comparisons between 1833 and the present day. Many actors in the present day have been put in the same precarious position as Aldridge, of facing the same racism that Othello faces while playing Othello. In 1987, actor John Kani performed Othello in apartheid South Africa, and faced the same criticisms of his pronunciation of Shakespeare’s words that Aldrige faced 154 years earlier. Similar racism has been perpetuated in the 21st century, too. Since 2013, actor-playwright Keith Hamilton Cobb has been performing American Moor (a play about a Black actor struggling to audition for Othello under the direction of a white director). Cobb has been open about facing racism from critics, audience members, and theatre producers who are uncomfortable with the show’s directness in addressing racism.

Ever since Othello has been staged, audiences have used the play as a Rorschach test, treating the play’s complicated characters like inkblots onto which they project their own thoughts about Shakespeare, race, and difference. These projections often transform Othello from a flawed, tragic hero into a grotesque caricature of Blackness. Too often, this transforms the actor playing Othello as well into this same caricature.

It will take plays like Red Velvet—and American Moor, and any other play willing to negotiate Othello’s messy history—to make all of us take a step back and understand this dynamic. It might be true that Othello’s racist legacy will never die. It remains up in the air if our empathy for actors playing Othello will live on into the future.