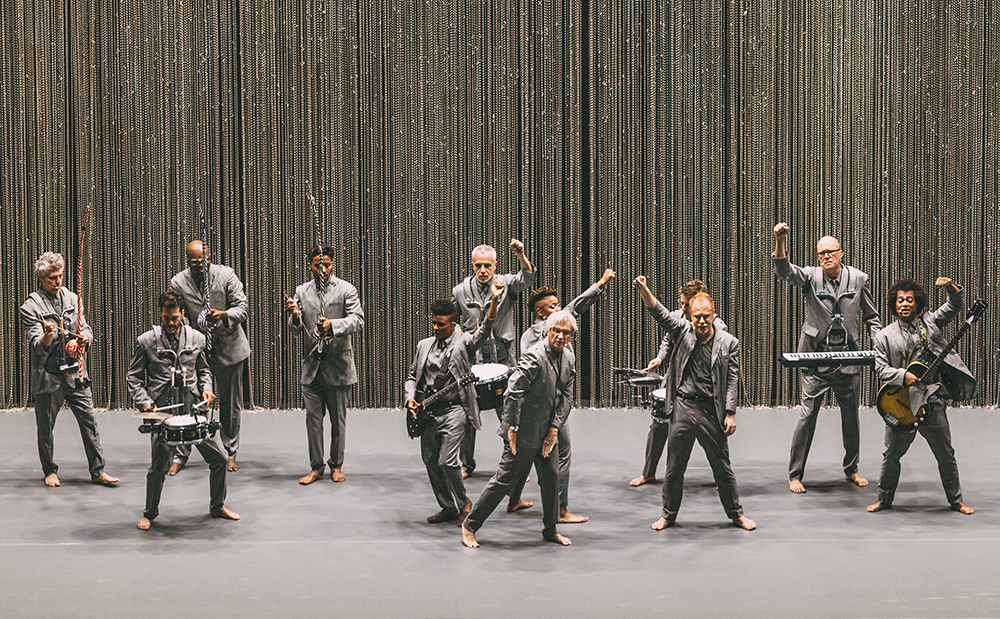 Before the curtain even rose on American Utopia playing at the historic Emerson Colonial Theatre, the sounds of birds and thunderstorms filled the space - I knew we were in for a unique night. David Byrne has brought his world tour to Boston before taking residency at Broadway’s Hudson Theatre for the next four months and boy was it an experience for the ages.

On a bare stage, Byrne tells stories - albeit sometimes disjointedly in between his rock numbers. As I looked around the theatre from my seat, I could see Mr. Byrne had many audience members in the palm of his hand where he truly commanded the Colonial stage. By the end of the night he had the entire audience up on their feet dancing and singing along to his iconic music. While interesting in scope, Byrne’s delivery sometimes felt as though he was rambling off even though the rather large teleprompter located on the side of the mezzanine was quite visible to all.

The 11 other singers, dancers, and musicians who take the stage to support Mr. Byrne give it their all, and their charisma and energy feed off each other. Tendayi Kuumba and Chris Giarmo seem to not stop moving for almost 100 minutes straight and are an amazement to watch. Annie-B Parson directs and choreographs a stripped-down production with Alex Timbers serving as Production Consultant (Parson, Timbers, and Byrne all collaborated on Here Lies Love at the Public a few years back.) Byrne talks how he wanted to bring the audience closer to him and his stories by stripping away everything else besides himself and the music. He has created an environment where the line between audience and band are blurred.

David Byrne’s American Utopia is a wildly unique theatre experience that is not to be missed for those who are fans of his existing catalogue. As a 20-something millennial, I must admit I was not all that familiar with Mr. Byrne or any of his music. While I acknowledge that this experience is not targeted at me, I can recognize the cultural impact he has made.  I say - keep on rockin'.