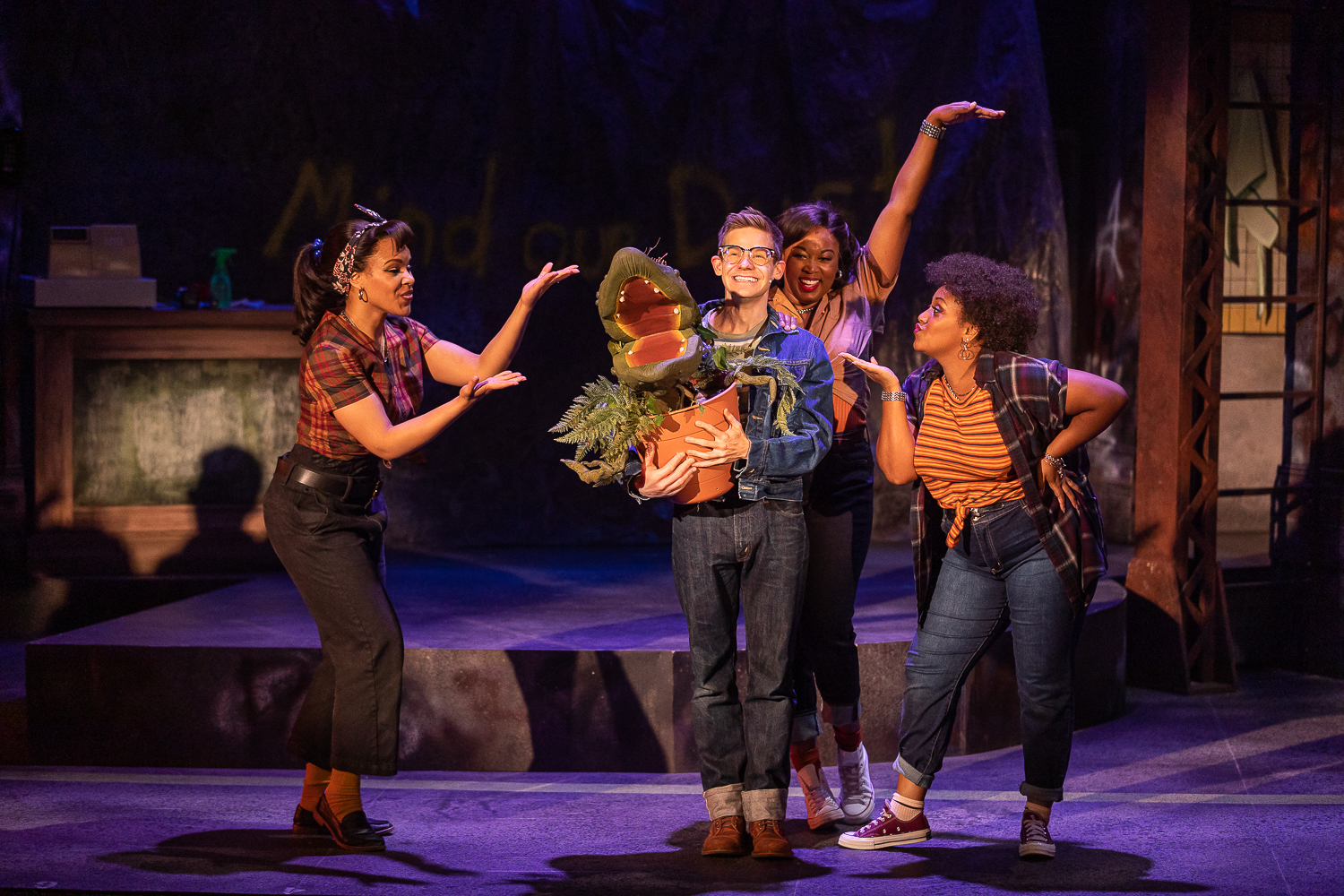 Theatrely made the trip out to Cape Cod to catch opening night of Little Shop of Horrors at the Cape Playhouse...and boy are we glad we did.  For their second show of the 2019 summer season, Artistic Director Michael Rader has delivered a delicious, mouth-watering, crowd-pleasing hit.

Most are familiar with Little Shop from the, now iconic, 1986 movie starring Ellen Greene or the countless productions performed around the country every year - and if the rumors are correct -- perhaps a new production in New York sooner than later.  It tells the story of a woeful worker in a florist shop who grows a strange and unusual new plant that feeds on blood, human blood that is.  With a Motown infused rock score by the great Alan Menken and Howard Ashman, you can never go wrong with this classic.

Let’s start here - Rema Webb as the voice Audrey II is something we never knew we needed in our life until we experienced it.  Before the curtain even rose on the first scene, Webb brought down the house with her killer pipes that we have come to and continue to love over the years.  Having the plant [Audrey II] voiced by a female adds an entirely new dimension to the show where Seymour is literally and physically fighting between the two most important women in his life.  A brilliant choice was to add Webb whose version of Feed Me (Git It) truly made our mouths drop with her soulful-filled riffs.

Andrew Keenan-Bolger as Seymour was a perfect choice, after watching him on stage he truly just embodies the role.  Known for originating Crutchie in Newsies on Broadway, Keenan-Bolger’s tone is clear and an overall a true delight to watch on stage.  A true theatre kid at heart, you could tell he was having the time of his life on that stage.  Audrey was happily portrayed by Lauren Zakrin of Great Comet fame (although we would be remiss to not mention her killer performance in We Are The Tigers early this year Off-Broadway).  Their rendition of Suddenly Seymour was one of the best we have ever heard - (Zakrin optioned up at the end!!!! An excellent and truly breath-taking decision).

Rounding out the cast was an always fun Stephen Berger as Mushnik and the talented Miles Jacoby as the sadistic dentist Orin (as well as many other roles).  The Urchins comprised of Traci Elaine Lee, Nia Marché, and Talitha Farrow sang their faces off as the trio and truly blew the audience away.  No production would be complete without great puppet manipulation done beautifully by Teddy Yudain.

A huge round of applause to the crew who turns the Playhouse around in a matter of days from show to show.  Paul Tate Depoo III created an alluring, stunning set topped off with great lighting by Jaron Hermansen.  Ryan Park’s costumes perfectly set the tone and brought the world to life - however -- those might be the cleanest pair of Converse shoes I have ever seen on Skid Row!

Do yourself a favor and go see this classic musical that has fun for the entire family.  It is certainly not to be missed.

"Little Shop of Horrors" is playing at the Cape Playhouse now until July 6th.  Get tickets here: www.capeplayhouse.com

$25 Student Tickets are available a week before in person at the box office.