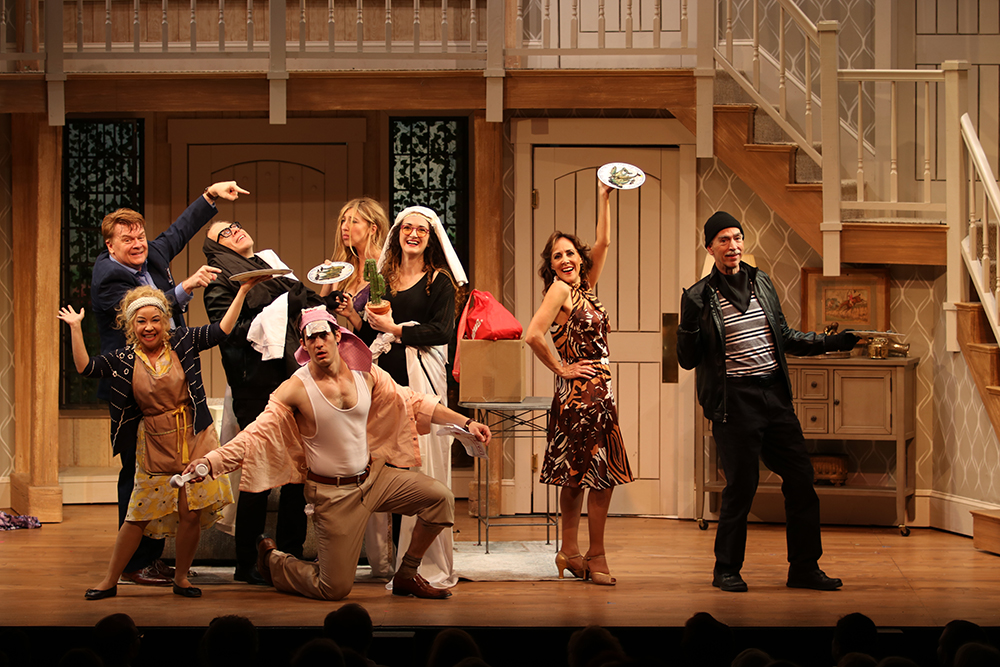 Curtain up…or down..or should I say up for Noises Off now playing at the Cape Playhouse until August 17th.  The 93-year-old theater has once again produced an exhilarating production that proves to be a masterclass in comedy right here on Cape Cod.

Esteemed playwright Michael Frayn wrote his farce-within-a-farce in 1982 and New York Times critic Frank Rich once declared it, “the funniest play written in my lifetime”. No wonder this show has been produced three times on Broadway in its 37 year history; not to mention numerous productions around the world.  Frayn’s intricate story tells the tale of the play “Nothing On” that the audience witnesses three different productions of during the course of the show. Act I shows the final technical or rather dress rehearsal of the show, Act II flips the set showing the audience the show from backstage while Act III features the final performance of their touring production.  Directing this behemoth of a play is no easy feat, not to mention doing it in 2 weeks, so kudos to Jeffrey Denman for doing a first-rate job.

Playhouse favorite, Jennifer Cody, returns for her 13th show as the irresistible lead actress Dotty.  Ms. Cody is an utter delight to watch on stage in what is one of my favorite performances of hers to date.  Her physical comedy alone stole the show in each of the three acts.  Saturday Night Live star, Heidi Gardner, assumes the role of the ditzy, young ingenue Brooke.  While this marks Ms. Gardner’s first theatrical credit, you would never know with the stage presence she exudes in every scene.  Whether searching for her contact lenses, practicing her meditation techniques, or taking selfies amid the chaos around her she always found a way to grab your attention in the best possible way.

Jeremy Webb plays Lloyd the director within the play who’s romantically involved with almost everyone in his cast from sarcastic one liners to perfectly timed sighs of exasperation, he emerged as a stand out within the small cast. Janine Lamanna brought the laughs as Belinda, one of the more respected actors in the troupe. David Patterson played Freddie with equal amounts of heart, humor, and a happy-go-lucky honesty and charm.  Rounding out the cast is John Scherer as Garry, Craig Wesley Divino as Tim, Philip Goodwin as Selsdon, and Taylor Galvin as Poppy.  The entire cast brought the energy needed for this fast-paced and meticulously blocked charade of a farce.

It is rare nowadays for a show to receive entrance applause in the regional theatre market, so for the scenic design to get not one, but two rounds of applause is due to David L. Arsenault’s breathtakingly stunning set.  A two-story, seven-door country side house is turned around effortlessly to view the backstage area of the play during a short intermission before Act II. Rounding out the creative team is Dustin Cross on costumes, Isabella Byrd on lights, and Joe Palermo with sound.

If you want to laugh and then laugh some more and follow that up with some side splitting laughter, take a few hours, grab your friends and check out Noises Off, you certainly won’t regret it.

“Noises Off” is playing at the Cape Playhouse now until August 17th.  Get tickets here: www.capeplayhouse.com