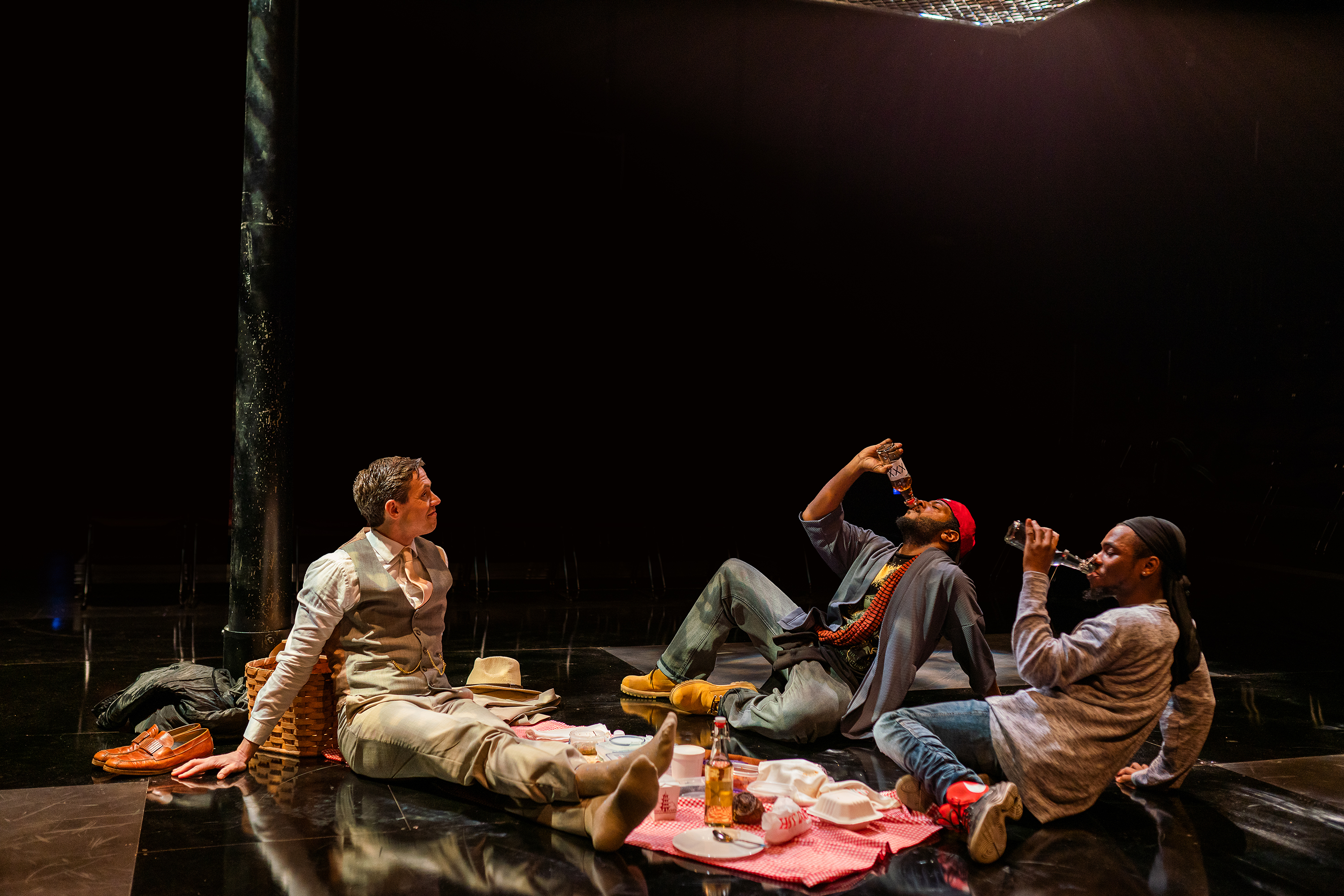 It has been three days since I attended Pass Over at SpeakEasy Stage Company, and the powerful images of this new drama are still stirring inside my head. Written by Antoinette Nwandu, and hauntingly staged by Monica White Ndounou, Pass Over is co-produced with The Front Porch Arts Collective and is now extended through February 2nd.

With inspiration from Samuel Beckett’s Waiting For Godot and the Exodus Saga from the Old Testament, Nwandu has created a chilling portrayal of young black men in society today. The play premiered at Steppenwolf in Chicago three years ago. I first caught this play when famed director Spike Lee filmed the original production for Amazon Studios. After a slightly retooled version at LCT3 in New York in 2018, Pass Over is now popping up at regional theatres across the nation. The story follows Moses and Kitch, stuck on a street corner under a lamppost envisioning a better life here in America, until one afternoon is abruptly interrupted by a mysterious white male whose intentions are unclear at first.

The three actors in SpeakEasy’s Pass Over are delivering first-rate performances over in the Roberts Studio Theatre. Kadahj Bennett as Moses and Hubens “Bobby” Cius as Kitch start out riffing on each other before the performance even begins. As the audience fills the house the two performers roam about on their corner as it is any other day. Bennett’s heartfelt and mournful Moses elevates this production to the next level. Cius provides a sweet and at times humorous young Kitch still naive to society today. Local favorite Lewis D. Wheeler appears from the audience as Mister, and later Ossifer–two different white men each with specific agendas for the two boys. His chilling portrayal helps to illuminate the injustices in our society just as Nwandu has intended.

As the script states, the setting is “a ghetto street, a lamppost, night” but with the main characters in Red Sox and Celtics attire (costume design by Chelsea Kerl), one can only believe the locality that this particular production takes place in. Baron E. Pugh’s scenic design brings the bleak corner to the forefront of the story–the audience surrounds the action on all four sides. Kathy A. Perkins has created an eerie lighting plot in conjunction to Anna Drummon’s superb soundscape.

Through beautiful metaphors, Antoinette Nwandu touches on incredibly potent themes we face every day in our society. Pass Over is a play that Boston needs more than ever right now. A relevant piece of theatre that will continue to ruminate in my mind for weeks to come.

'Pass Over’ is playing at Calderwood Pavilion now until February 2.  Get tickets here: http://www.speakeasystage.com/