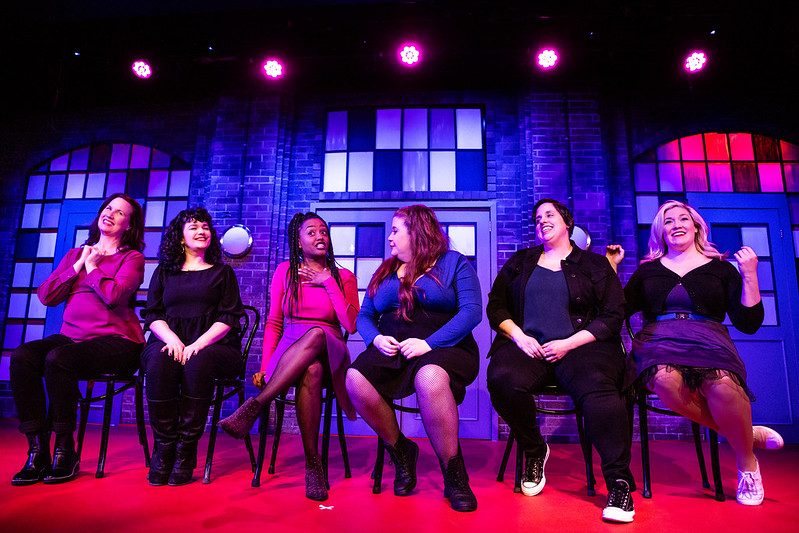 Cast of SHE THE PEOPLE in Chicago
By
Lara McCallister
No items found.
on
Category:
Reviews

Often, an efficacious story is one that is veiled in a series of satirical jokes. Such describes the brilliance behind Second City’s She The People at the Huntington Theatre Company. An improv-esque show, She The People masterfully delivers a series of sketches and skits that farcically yet poignantly describe the female experience. From political turmoil, to body positivity, from portrayals in the media, to plain and simple sexism, head writer and original director Carly Heffernan writes of a multitude of perspectives that creates a piece of theatre “performed by females, but for everyone.”

One sketch, in particular, took a stab at the roles often given to females in commercials. Lori McClain poked at females always wearing blue cardigans during cleaning supply commercials, while Kazi Jones wondered just why shaving commercials always depict women in a tropical paradise, waterfall and all.

Those skits which addressed body positivity also packed a punch. Shelby Plummer and Yazmin Ramos joked at the ridiculousness of female sizing. During a frantic attempt to escape a house fire, Plummer laments at the struggles of tight-fit clothing and inaccurate sizing in department stores. The painful relatability yet humor in the sketch created a theatre that reverberated bellows, laughs, and snorts. In the same vein, Jess DeBacco portrayed a young adult and a 12-year-old Plummer before a Weight Watchers meeting. In a skit filled with punchline after punchline, the 12 year-old turns to the adult at the close of the scene and asks if she will ever love her body. With that line, the laugh that once bellowed in the theatre quickly transformed into groans and sighs.

Lexi Alioto was truly a standout performance. Her physicality, facial expressions, and slap-stick portrayal of each character took each of her sketches to a new level. Likewise, Plummer’s quick wit, exceptional improv skills, and effervescent stage presence left everyone chuckling up a storm.

The cleverness of this piece does not purely lie in the jokes it tells (although, there are many that will leave you gasping for air). Rather, it is the effectiveness of the six women that both impact and inspire through comedy that is the real win for this show. Real societal annoyances are being relieved (or at least heard) through a comedic lens. Although some skits were far more effective than others in this mission, at least one will leave each audience member feeling heard, respected, and laughing at some of the daily irks and quirks of being female.

"She The People" is playing at Calderwood Pavilion at the BCA thru March 8. Get tickets at https://www.huntingtontheatre.org