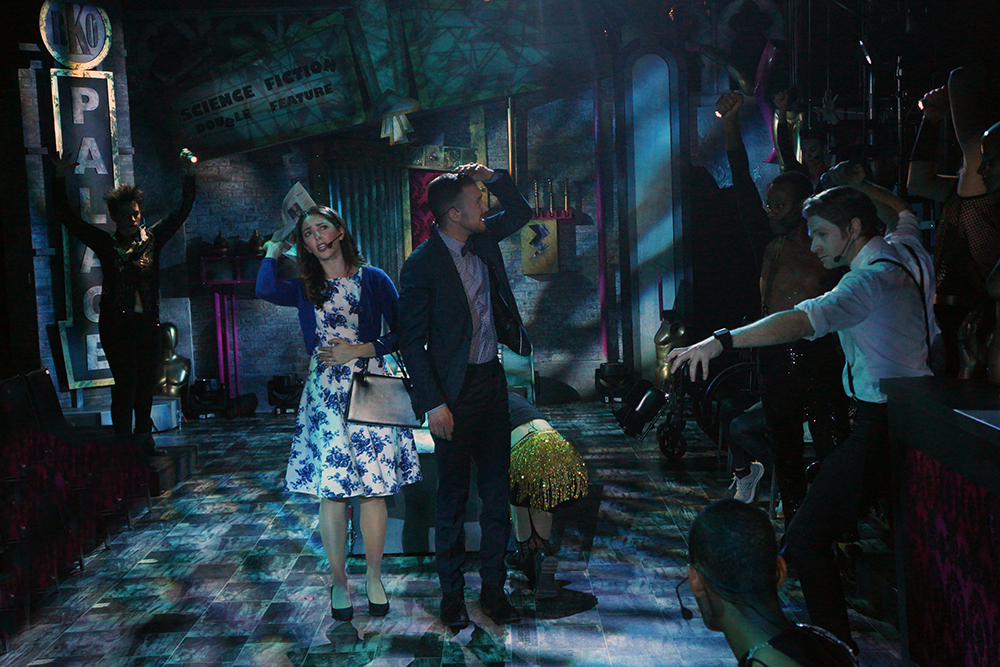 Moonbox Productions has knocked it out of the park with The Rocky Horror Show now playing in Harvard Square until November 2nd. The cult classic is has “popped up” at what used to be a former candy store and even a Lululemon. I dare you to find a more enjoyable two hours of pure fun and entertainment this side of the Charles River.

As soon as I walked into the beautifully transformed space by set designer Cameron McEachern, I knew I was in for a great evening. Moonbox invites all to dress in costume and sing along to the infectious rock ‘n’ roll score. An audience member near me was mouthing the words to every song and eventually started belting along with the cast. If you are familiar with the x-rated callouts associated with the show feel free to shout them out – the theatre encourages it!

Peter Mill leads the wickedly talented cast as a rather delicious Frank-N-Furter. He brings the iconic character to life with sass and bravado. The lovable newlyweds Brad and Janet are played by Alexander Boyle and Carly Grayson respectively; each shine in their own way.  Their killer voices fill the space and Mr. Boyle’s “Once In A While” was rather brilliant. Lori L’italien as Magenta and Brad Foster Reinking as Riff Raff are lovely in their roles. Shonna Cirone does double duty as Eddie and Dr. Scott.  Cirone’s glorious belt is worth the price of admission alone.

Alex Jacobs’ Narrator was my favorite of the night with his authentic British accent in tow. Bravo to the ensemble of phantoms who are the heartbeat of this production and really give it the life that is necessary with this show. Props to Zachary D. McConnell who performed the entire night in what is at least six inch heels.

Director David Lucey and choreographer Dan Sullivan had to get creative with the staging and dancing as the space it set up as an alley stage with audience members on both sides of the action. If you are not a fan of audience interaction, perhaps purchase a set in the back few rows. The theatre can get a little warm so be mindful when dressing up for the evening.

This unique staging of the show is exactly what we need in Boston; I hope more companies latch on and get creative in the way they produce work. This remodeled storefront is the perfect setting for this show. Grab your friends, grab some drinks, and head on down to do the "Time Warp" - you certainly won’t regret it!

‘The Rocky Horror Show’ is playing in Harvard Square now until November 2.  Get tickets here: http://bit.ly/rockytickets