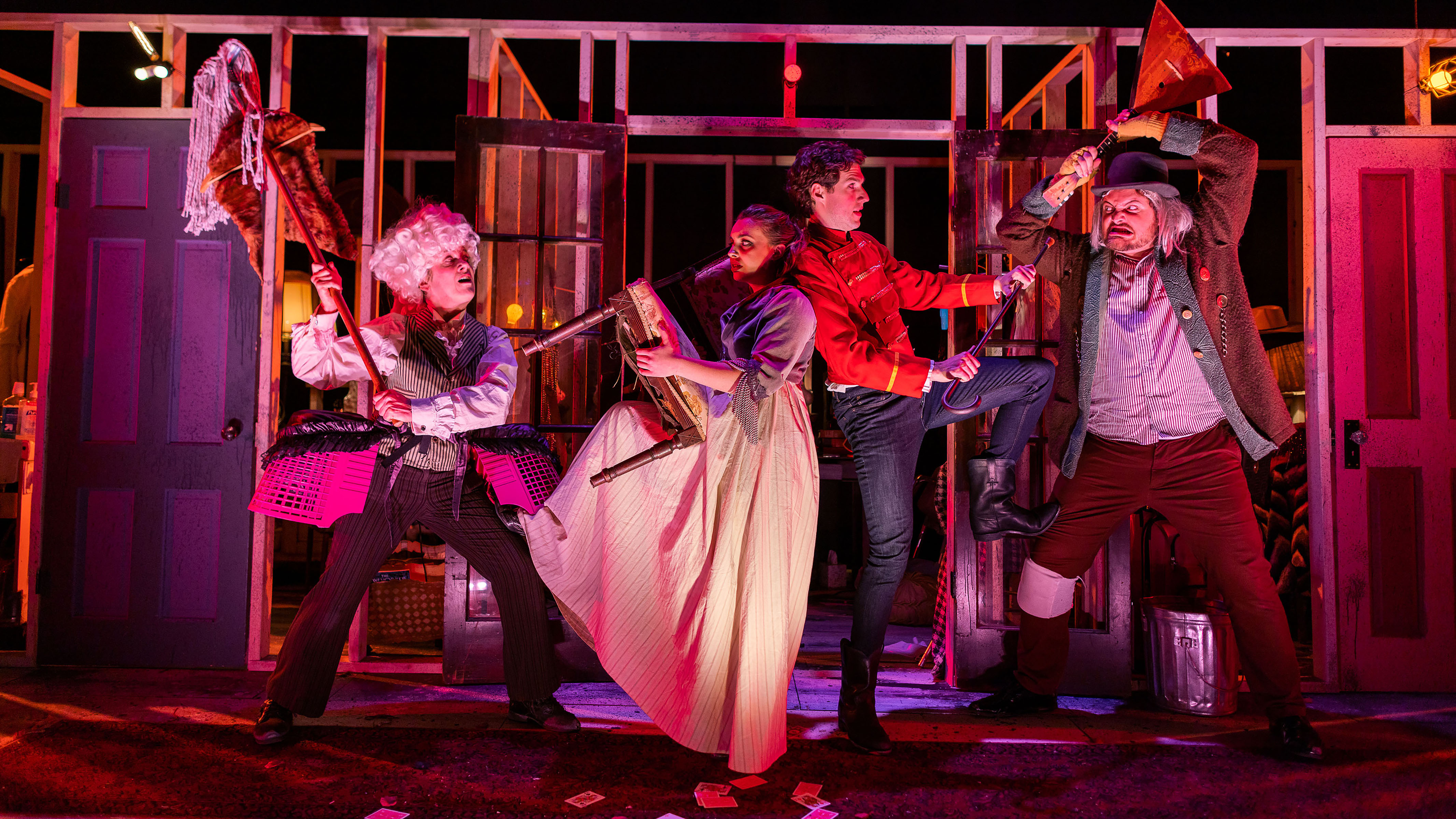 “Never be too good, nor too bad. The world will punish you for both. Try to pace right with the rest of us in the unnoticeable hypocritical middle.” Lucky for Vanity Fair at Central Square Theater, this new production by Underground Railway Theater does an excellent job of making sure that they are far from unnoticeable.

What does it mean to be an innately bad or perhaps innately good human being? Kate Hamill’s stage adaptation examines the life of Rebecca Sharp and Amelia Sedley as they navigate their lives in 1815 England. William Makepeace Thackeray originally wrote Vanity Fair in 1848 and with that debut was launched into a new level of permanent fame. Vanity Fair follows the lives of the families of our protagonists from before and after the Battle of Waterloo and into middle age as our heroines attempt to make sense of their world in regard to romance, money, interpersonal relationships, and motherhood.

Jospehine Moshiri Elwood tackled the difficult role of Rebecca Sharp with ease, wit, and ever present charm in her Central Square debut. Elwood leads the ensemble in portraying the fast talking, manipulative, orphaned girl and plays Rebecca with a clever, uncanny perspicacity for the character. Her vibrance and light shines from the stage and she excelled in the demanding role as my favorite performer of the evening.

David Keohane, Paul Melendy, and Evan Turissini do an incredible job of playing ten different characters throughout the course of the evening and bring much needed moments of grounded emotions and spot on comedic timing. Keohane brings his boyish charm to the character of Rawdon Crawley and electrifies the stage, drawing the whole audience in, during one of few somber, heartfelt moments of the play. Melendy brings a relatable, realistic, and authentic feel to William Dobbin and is able to provide the audience with a character to root for when surrounded by a cast of characters who are more often than not only looking out for themselves. Melendy elevates comedic timing to the next level when he plays various sound effects and had the audience and myself dying of laughter. Turissini had the most diverse repertoire of characters of all the players on the stage switching seamlessly between the meek and loveable Joss Sedley, the spine chillingly evil Mr. Osbourne, as well as the spiteful, good for nothing, Sir Pitt. Turissini’s ability to so effortlessly capture the emotions and intentions of such a vast variety of characters was marvelous to see and was a highlight of the play. Having only seven actors portray over twenty different characters requires distinct and specific choices to be made by the actors and it is clear that Turissini was able to deliver with each of his characters standing on their own.

It is imperative to stay the importance of the design team when tackling such a goliath of a show. Jeff Adelberg shines as the lighting designer, pun intended. The lights had a fun, quirky, Vaudeville-like feel throughout the play. The choice to incorporate various light sources allowing the audience to understand that the scene has changed was an ingenious thought and worked well. David Gammons scenic design was inventive but felt very cluttered and at times distracting for the audience. The set which consists of seven doors and seemingly the dressing rooms of the players, which allowed the audience to see the cast change costumes, move about the stage, and prepare for their next time in the story. This choice to allow the audience to always see the “backstage” behind the closed doors of the set proved distracting at times throughout the evening, having my eyes dart to what a player was discussing or changing into rather than watching the current action unfold in the spotlight. A nod must be given to David Wilson as the Sound Designer who utilized music and sounds from the past and present to allow the audience to feel the emotions that the players were portraying.

While frantic and overwrought with emotions ranging from slapstick to farce to absurdist to the use of satire to convey the caricatures that these actors were playing, director David Gammons leads this cast on in an interesting journey toward self-discovery and self-actualization while allowing them to find out what is most important for them at their deepest most primal desire levels. Gammons decided to combine 21st century music and props with costumes and dialect choices that more closely resemble the 1800s time period during which the play takes place.

Beyond tackling difficult subjects of morality, power, wealth, and fame Vanity Fair provides audiences with a rare opportunity to see a woman act as horrifically, if not worse, than male counterparts with little to no major repercussions for her actions. With moments of extreme luck and extreme despair this show epitomizes how our morals play a part in our everyday lives and whether or not those morals ultimately affect the choices we make for ourselves and those around us.

"Vanity Fair" is playing at Central Square Theater thru February 23. Get tickets at www.centralsquaretheater.org.