We All Fall Down Review - Huntington Theatre Company 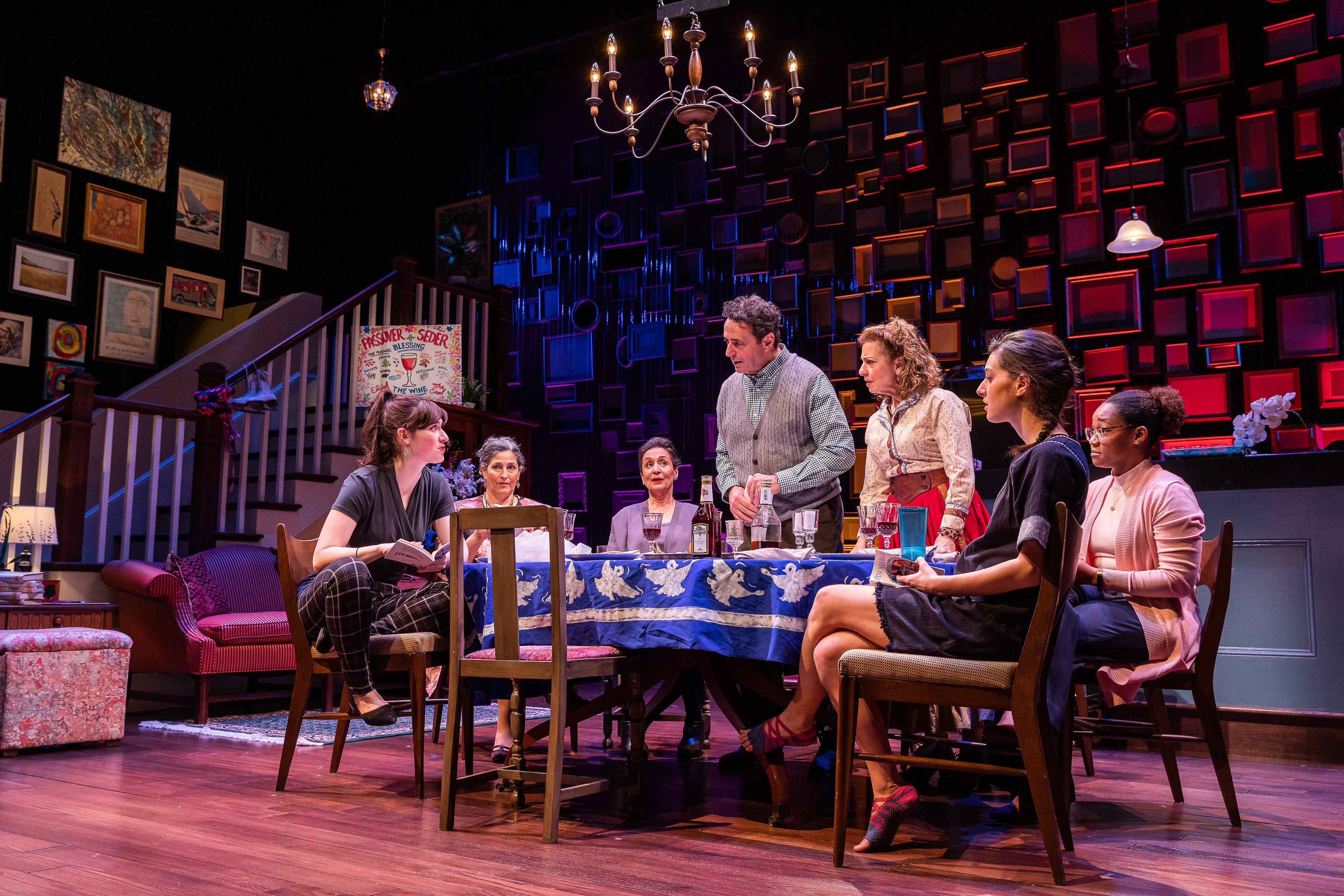 “Why is this night different from all other nights?” It’s a question that you would most likely be asked by your English professor if you were writing a play that took place at night, but also one of the four questions that the youngest child at the Seder table must read aloud on Passover.

In Lila Rose Kaplan’s new play, We All Fall Down, presented by the Huntington Theatre Company, it is clear that this night holds a lot of weight for one Westchester family. For the Papa (the papa!), it’s a night to return to tradition (tradition!) in a Jewish household that has been far from traditional for the past three decades. For the Daughters (the daughters!), it's a night for each to share some big news and address a family issue. Most importantly, though, it’s a night for the Mama (the mama!) to prove to herself and her family that she can hold everything together. The Mama can get her curmudgeonly husband, her two rebellious (each in their own special way) daughters, her curt sister-in-law, her intellectual (Christian) assistant, and her former (Christian) neighbor to sit down, laugh with one another, eat kugel, and drink the fruit of the vine. Also, did I mention this family has never hosted a Seder before? Ever? That may be an important detail. Especially when you see boas, finger puppets, poster boards, and Star Trek costumes laying around the house.

Eleanor Reissa leads the ensemble as the mother of the household, Linda. A quick-witted, outspoken woman in her sixties, Linda is attempting her first Seder for a reason that remains unclear until the end of the play. Reissa absolutely shines in this piece. Even when she’s not onstage, her presence remains ever clear, looming over the other characters (some who even spend parts of the play hiding from her.)

This isn’t to say the other actors aren’t holding their ground. In particular, my favorite performer was Phyllis Kay as Linda’s sister-in-law Nan, bringing a role that could easily be forgotten to new heights. While other characters seem to have clear and intense ulterior motives for sitting at the Seder dinner, Nan is clearly there because she did not have anywhere else to go. Kay’s Nan is the comic relief in this comedy. What I mean is that the other Four Jews in a Room Bitching (sorry, had to say it) can sometimes be tiresome or exhausting. The audience often jumps from one character’s pent-up familial traumas and accusations to another’s. Meanwhile, Nan sits in the bathroom reading the New Yorker and blocking out the noise of her family members–I wished I was Nan at some points during the show.

Where the show struggles is with the younger characters. While Liba Vaynberg, Dana Stern, and Elle Borders do try their hardest with the respective roles of Sammi and Ariel (the daughters), and Ester (the assistant), We All Fall Down struggles to create three-dimensional voices for its Millennial generation. Ariel, in particular, who is a yogi-in-training, yells mantras out of nowhere. While it could be interpreted as a type of compulsion from a character who has dealt with mental illness in the past, it often distracted from a play whose dialogue usually flowed quite naturally.

Director Melia Bensussen captured the anguish of a contemporary Passover Seder in the frantic staging of the production very well–any Jew can relate to watching their mother pace around the house preparing for a Passover Seder, and the upright stillness of the guests who do not know whether it is best to help her or leave her alone. Additionally, Karen Perry’s costume design would have allowed me to really understand each character even if I had blocked my ears for the entire show.

I did find the show quite heartwarming overall: the natural flow of the dialogue, the solid performances, and the high stakes (or, in this case, briskets) really do bring us on a journey as Linda and her chosen family try their hand at a new tradition. While it was clear some of the Jewish comedy was going over Boston audiences’ heads, the play is accessible enough for any modern viewer to enjoy their experience.

Whether Jewish or not, Kaplan’s play reminds you and me that the story of Passover is not just one of food and family, but one of the freeing of slaves. While the Haggadah may refer to a literal freeing of actual slaves, Kaplan views it as a metaphor. There is a point in all of our lives where we must free ourselves from the identity our family forced upon us. In We All Fall Down, Kaplan invites us to accept that Exodus is, really, just a part of life. To that I say: l’chaim!

‘We All Fall Down’ is playing at Calderwood Pavilion now until February 15.  Get tickets here: www.hungintontheatre.org