RICHARD III and BETWEEN THE LINES Two Stories, One Arena — Review 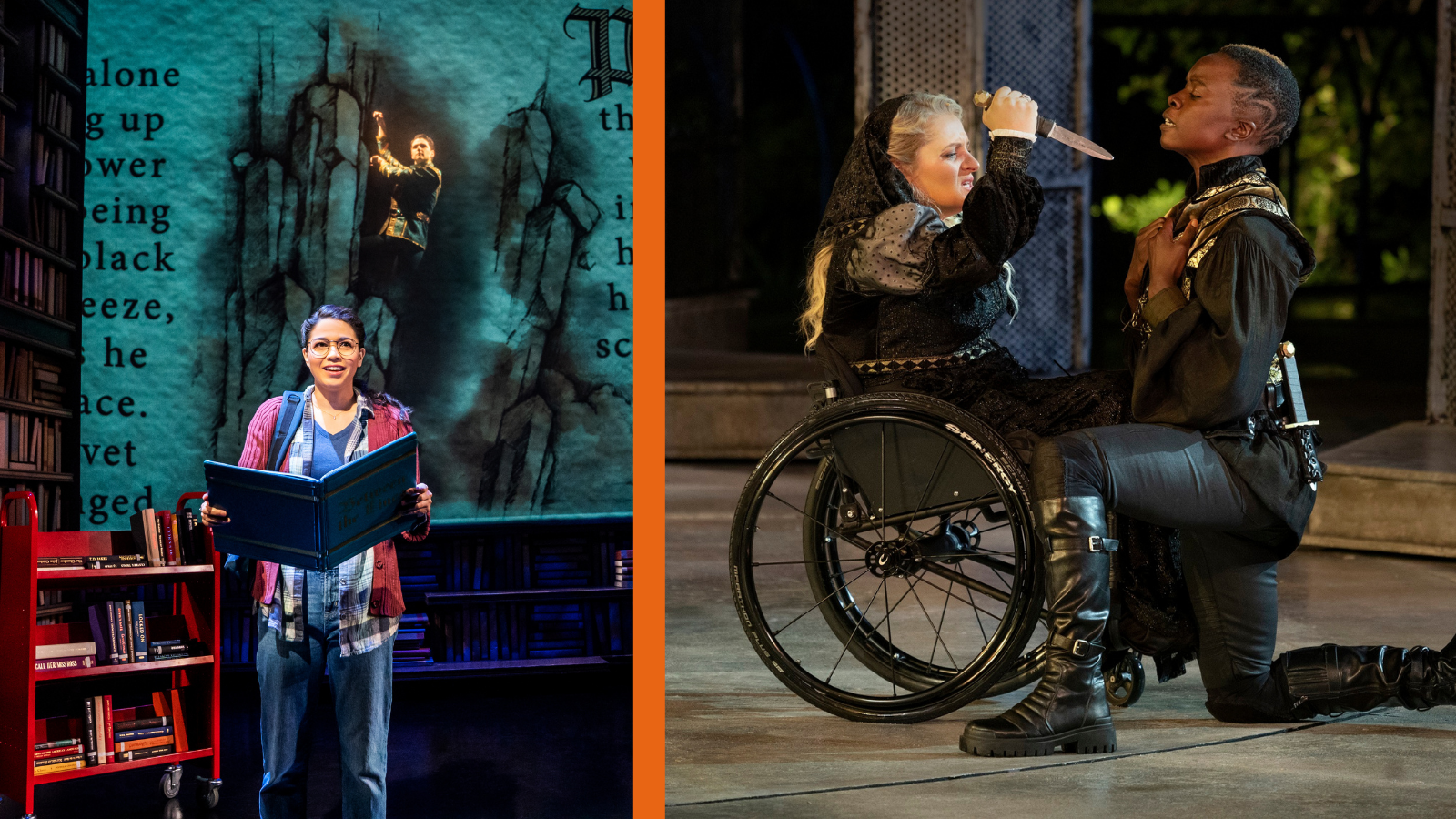 Arielle Jacobs in Between the Lines and Ali Stroker and Danai Gurira in Richard III | Photos: Matt Murphy and Joan Marcus

Two shows I’ve decided are set in the same arena — England; the mythos of England — have just opened in New York, full of inconsistencies and sparks of magic. Richard III, opening the Public Theater’s 60th Shakespeare in the Park season, features a fierce Danai Gurira in the title role and a sturdy ensemble, but hardly any dramaturgical cohesion. Between the Lines, a new musical based on a Jodie Picoult novel (co-written with her daughter Samantha van Leer), has a fun spark of storybook whimsy, but burns itself out by spreading itself too thin.

Directed by Robert O’Hara, this Richard III is a muddled interpretation that looks great — on Myung Hee Cho’s turntable of cathedral-like arches that look like a kaleidoscope crown of teeth, ominously, luminously lit by Alex Jainchill; in Dede Ayite’s rich costumes — but doesn’t sound too convincing. That’s partly because the sound design and compositions by Elisheba Ittoop can’t make its mind up as to whether this is a period-appropriate narrative, or one which could sprinkle some trap music sporadically throughout.

But mostly it’s because, as in his reinterpretation of Long Day’s Journey Into Night earlier this year, O’Hara’s interventions play more like experiments, targeted directly at certain parts of the text, but without much concern for the overall work. His characters here are excellently played by a strong cast — out of which stand Ali Stroker, Sanjit de Silva, and Sharon Washington — but aren’t tied together by any unifying vision, fear, or atmosphere.

As the ambitious Richard of Gloucester, dispatching obstacles left and right (children are not spared) in his quest for the throne, Gurira embodies his hunger, but not the passion; the stamina, but not the drive, exacerbating the production’s main problem: its lack of any air of impending terror or tragedy.

Despite that production’s inert blood-letting, it still might prove too violent for your public library’s young-and-young-at-heart book club. Enter Between the Lines, with a book by Timothy Allen McDonald and music and lyrics by Elyssa Samsel and Kate Anderson. Combining the plot of its titular book with that of its sequel, it follows Delilah (Arielle Jacobs), a bookworm entering junior year at a new school after her and her mother (Julia Murney) are forced to relocate following a messy divorce.

Finding solace in a rare storybook she finds at the school library, she falls in love with its heroic prince (Jake David Smith, all grins, all charm) and, eventually, falls in. There, the magical characters are played, Wizard of Oz-style, by people from her real life: popular mean girl Allie (Aubrey Matalon, filling in for Hillary Fisher the night I saw the show) is the whiny Princess Seraphima; her dumb jock boyfriend Ryan (Will Burton) becomes a man cursed to be a dog; and her own mother becomes the alcoholic Queen Maureen.

It’s a charming setup, and the cast is all in, genuinely happy to be inhabiting these mirrored worlds. The production is all the better for it, but too many interesting characters is a double-edged sword for the story, which sinks under the pressure of making sure everyone gets a number (making it perfect for school productions). With a whopping 24 songs across two acts, you start to wonder how much you actually need a psychiatrist character, or the one-verse number his fairytale counterpart gets.

In truth, the two characters who needed more time onstage are the ones played by the hilarious Vicki Lewis. As the school’s randy librarian, she gets the one number that directly confronts the cardigan-covered horniness of Barnes & Nobles frequenters in “Mr. Darcy and Me,” which makes great use of an already delightful bit of shadowplay bountifully employed by Tobin Ost’s set design, Jason Lyons’ lighting, and Caite Hevner’s projections. In fairytale world, she is the queen’s put-upon Lady-in-Waiting, hinting at the true darkness housed in these storybook archetypes.

Despite the over-generosity of song distribution, the book’s humor veers into cringey coffee-mug- joke territory — I’m shocked no one wears a “Don’t Talk To Me Until I’ve Had My Brontë” t-shirt — and some rather vapid feminist “deconstructions” of the knight in shining armor trope, among others. But after some time I began to admire it for its purity of heart and clearly-defined ambitions. It might not be my cup of tea, but then again I’m no longer in the Borders set.

Richard III is in performance through July 17, 2022 at the Delacorte Theatre in Central Park in New York City. For tickets and more information, visit here.

‍Between the Lines is in performance at the Tony Kiser Theatre on West 43rd Street in New York City. For tickets and more information, visit here.